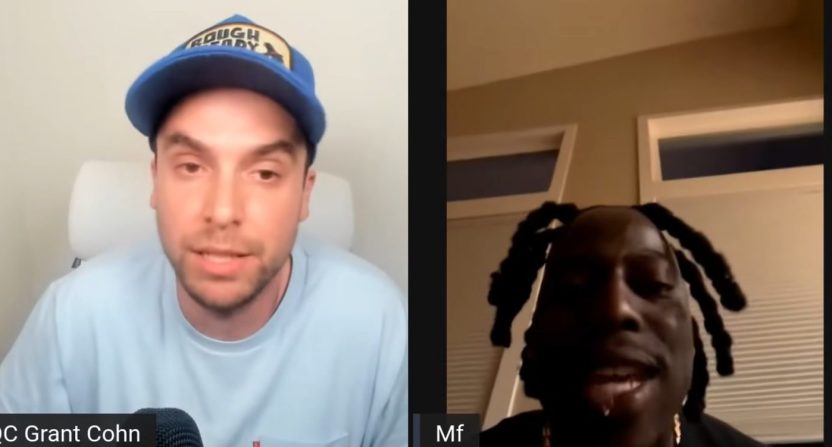 San Francisco 49ers defensive tackle Javon Kinlaw isn’t a fan of reporter Grant Cohn, and he let his feelings be known on Tuesday during a profanity-laced tirade.

Cohn, who covers the 49ers for Sports Illustrated, claimed Kinlaw confronted him during Tuesday’s OTA session. The reporter posted a video on his YouTube page to describe the incident, alleging Kinlaw approached him and aggressively knocked the hat off his head.

“My hat flew through the air and hit Josh Dubow of the Associated Press in the head!” Cohn said. “He might have a concussion, I don’t know, it was VERY upsetting.”

Shortly after the “upsetting” hat incident, Cohn said he walked by Kinlaw on the field and the 24-year-old defensive tackle began a freestyle rap. “‘Boy, you a b*tch, sucka ass b*tch,’” Cohn claimed Kinlaw said.

“Javon, what are you so upset about?” Cohn asked in his YouTube video before he appeared to answer his own question by bragging about all the criticisms he’s hit Kinlaw with in recent years. “Is it the fact that I said you have an 80-year-old knee…is it the fact that I said you’re unprofessional and immature? It escapes me, which of the hundred negative things I’ve said about Javon Kinlaw the last couple of years moved him to approach me in such a way.”

Hours later, Kinlaw joined Cohn for a video chat and admitted to confronting the reporter.

“Stop talking about people like people don’t got families,” Kinlaw said. “Stop doing that sh*t, bruh. What you get out of doing this? What satisfaction do you get out of this, man…You’re analyzing people like they’re not human, fam.”

“The only reason I’m getting on here and stooping to your level, this low, is because I feel like it’s gotta be done,” Kinlaw said. “Somebody gotta do it and it’s gonna be me. Somebody gotta press you, fam. You like to come on here and bully people on the internet. But when I press up on you in f*cking person, you f*cking shaking like a coward and voice lighter than my f*ckking baby…Your balls shriveled up, little d*ck n****.”

Cohn has been covering the 49ers since 2011 and his father, Lowell Cohn, spent decades covering the franchise for the Santa Rosa Press Democrat. The younger Cohn is known for being provocative and highly critical of players and staff, but he didn’t seem too perturbed by Kinlaw alleging he needs to find a new job, admitting a lawsuit and retirement was on his mind during the exchange.

This is the type of low life we let into our building. He would rather antagonize and provoke players into hitting him so he can retire instead of doing his “job“ of journalism. pic.twitter.com/jL5ZGTq8yZ

“If he had touched me, if he had pushed me, dude, I could have retired today,” Cohn said. “That’s what went through my mind, I’m like ‘oh damn, I’m about to retire, I’m about to be out of the game, I’m about to be a multi-millionaire thanks to Javon Kinlaw.’ But no, I gotta keep working.”

No one comes out of this bizarre exchange looking good. Cohn attempting and succeeding in provoking Kinlaw for attention is a bad look for sports media. At the same time, Kinlaw seems to struggle with criticism. And for a 24-year-old former first-round pick whose NFL career has so far been a disappointment, he probably isn’t finished being criticized by fans or reporters.