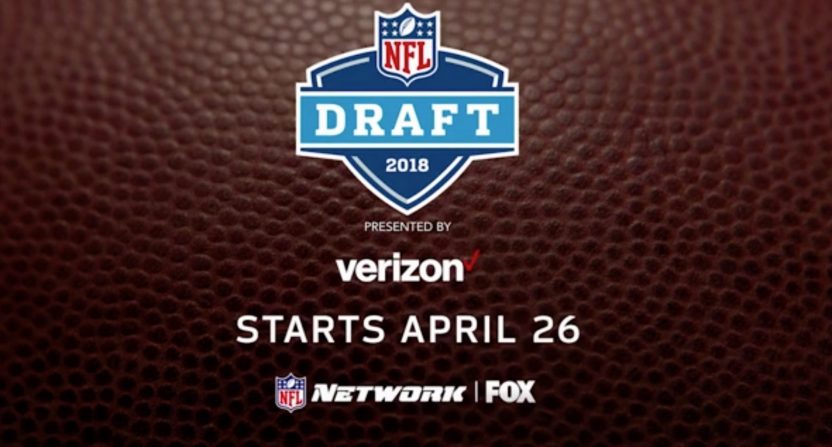 There’s been a whole lot of trumpeting of the 2018 NFL Draft’s ratings as the “most-watched” ever, most notably from league vice president of communications Brian McCarthy. But there’s more context to consider there, specifically how this draft was televised and how that compares to previous years. And the overall takeaway isn’t necessarily that there’s an unlimited appetite for the draft, or that it should automatically be expanded to all broadcast networks (even though that is perhaps a possibility).

Highest-rated is correct, as is most-watched if we’re considering average minute audience, but there’s more context to consider. Some of that comes from Richard Deitsch of The Athletic:

So, this is a big boost over 2017, but only a small one (at least when it comes to average viewership) over the heights of 2014. And in total viewership, 2014 brought in 45.7 million, as per Nielsen numbers cited in the NFL’s own release of the time, slightly above the 45.4 million listed here. (Which actually is equal to the previous total audience record set in 2010). Thus, this isn’t the “most-watched” when it comes to how many people consumed at least some part of it (in Nielsen tracking, at least). But what’s even more notable than discussions of those particular numbers (which after all, are pretty similar) is how much extra push this draft had than past versions, and how little overall traction it gained from that.

The 2018 draft was shown on five English-language networks as compared to the previous three, with Fox (simulcasting NFL Network’s coverage for the first two days, which included some Fox personalities) and ABC (simulcasting ESPN’s coverage on the third day) also involved. And having two broadcast networks involved is a big deal. Nielsen has estimated there are 119.6 million TV homes in the U.S. for the 2017-18 TV season, but many of those don’t have cable at all or have cable packages without one or both of ESPN and NFL Network. According to the Nielsen cable coverage estimates for April (provided by SportsTVRatings), ESPN is currently in an approximate 86.8 million homes, while NFLN is in 69.2 million.

Those estimates aren’t perfect, and there’s debate about how accurately they account for streaming bundles, but they give you a sense of just how big the broadcast TV universe remains in comparison to cable. So the simulcasts mean that for Saturday (the only day simulcast on ABC), around 32.8 million more homes (and that’s homes, not individual viewers) could watch ESPN’s coverage this year than in 2014. More importantly, around 50.4 million more homes could watch NFLN’s coverage over the first two days thanks to Fox’s simulcast. The numbers indicate that around 100,000 more people chose to watch NFL draft coverage at any given moment this year than in 2014, and that’s notable, but the 2014 number is probably more impressive given its narrower distribution. And it actually reached more overall viewers for at least some part of the draft.

Something else to keep in mind here is that this year’s numbers comes from a draft that seemingly lent itself to good ratings, especially around the first round. It had intense debate over which quarterback would actually be taken first and where the top four or five quarterbacks would go, late drama regarding the reports of the Browns targeting Baker Mayfield (which proved accurate, unfortunately for one Cleveland radio host), and two New York (the country’s biggest media market) teams with top-five picks. By comparison, the last three drafts had much more consensus around the top pick (Myles Garrett, Jared Goff, and Jameis Winston respectively).

2014 saw a little more drama, with Jadeveon Clowney becoming the first defensive player since 2006 to go first overall and lots of quarterback debate around the likes of Blake Bortles (drafted third), Johnny Manziel (22nd), Teddy Bridgewater (32nd), and Derek Carr (36th), so it makes sense that it was the previous high-water mark. And 2018’s draft providing drama and storylines isn’t a knock on it; it’s just a factor that goes into these audience numbers, and it’s worth wondering if a more milquetoast first round might lead to lower numbers even with this kind of expanded distribution.

The big thing to perhaps ponder as a result of this is if there will be further expansion of the draft to the other broadcast networks with NFL rights, CBS and NBC. The league would presumably like to see its big offseason event expand as far and wide as possible, and that’s why we’ve seen some discussion of each network doing its own coverage, in “the sports equivalent of a U.S. presidential election.” The rights agreements reportedly allow for that, and it makes obvious sense for the NFL to put this event in front of even more people, and they could play up these “most watched” arguments to try and convince the networks there’s enough interest out there.

And this idea might even make some sense for the networks, especially when it comes to the first night in primetime. While Fox’s NFL draft coverage alone drew a 1.1 in the 18-49 demographic/4 million viewers that night and came in below the likes of CBS’ Big Bang Theory (2.0/11.8 million) and ABC’s Grey’s Anatomy (1.5/6 million), that’s not counting the 2.3 rating/5.3 million viewers from ESPN, the 0.8/2.0 from NFLN, or the not-released numbers from ESPN2. And the numbers for Big Bang Theory and Grey’s Anatomy both marked series-lows for those shows in the 18-49 demo, so those networks presumably don’t love going head-to-head with the draft’s first night, perhaps especially with draft coverage available on broadcast.

Do the networks dislike competition from the draft enough to spend a significant amount of money producing their own draft feed? That may be the question. But the NFL does have significant pull with its broadcast partners, and it may be able to talk other networks into getting into the draft game as well. And that could be good for the league, which could continue to trumpet things like “most-watched” (if the draft expands to yet more networks and removes yet more competition, it’s probably going to post even bigger ratings). However, it’s notable that ESPN still pulled in much higher ratings for its draft coverage than Fox did despite the distribution gap, so there are plenty of people who are going to watch this on cable instead of on broadcast. And it’s also worth keeping in mind that amidst all of this “most-watched” hype, this is really a pretty modest increase over the previous peak of 2014 when you consider the expanded distribution.

And that supports the argument that there isn’t a vast untapped audience for the NFL Draft. If you put it on more and more networks, a few more people will probably watch, yes. And that lets the league keep talking about ratings growth and “most-watched.” But there appears to be a significant ceiling on just how high these numbers will go, even with coverage expanded to broadcast networks. And while further expansion might juice the numbers a little more, it seems unlikely that masses of people who don’t currently watch the draft are going to start tuning in. Regardless of how many networks it’s on.