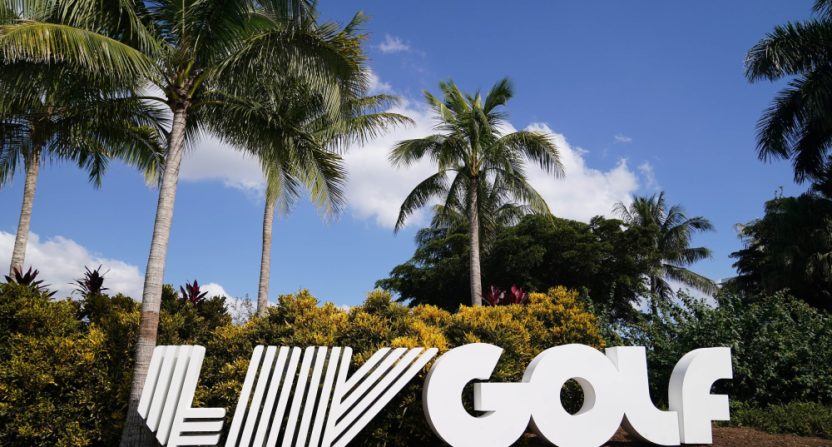 Heading into the second season of LIV Golf, there’s been a lot of talk about what kind of U.S. TV deal the Saudi-backed series might wind up with. In September, LIV Golf CEO Greg Norman said there was “enormous” interest and they were talking to “four different networks.” But later that month, reports emerged that the series had “struck out” with most networks, with its main option seemingly being an airtime buy on FS1. The series denied those reports as “incomplete and inaccurate,” though, and they now have finally reached a deal: not with Fox, but with the Nexstar-owned CW. There had been some recent reports of that coming, but Nexstar officially announced it Thursday, as relayed in a Wall Street Journal piece from Joe Flint and Andrew Beaton:

Here’s more from that piece, which illustrates that under this “multi-year deal,” the CW will carry Saturday and Sunday coverage of LIV events (like the October one in Miami seen at top) on its linear channels. However, Friday coverage will only be available to stream on the CW app:

The CW Network, which has been primarily known for programming teen and young-adult dramas, will air 14 LIV Golf events on its broadcast stations on weekends and stream them on the CW’s app as well. Friday LIV events won’t be broadcast but will be available on the CW app.

The decision to align itself with LIV Golf is the latest sign that Nexstar, owns 75% of the CW Network, is planning an overhaul of the network.

CW Network President Dennis Miller said in a statement that the deal is a “significant milestone in our goal to re-engineer the network.” Nexstar executives have said their goal is to attract an older audience to the network that is more in line with the viewers of its local television stations. Nexstar is the nation’s largest owner of local TV stations.

The financial side here remains somewhat in question. Bloomberg’s Gerry Smith wrote that the sides “will share advertising revenue,” but there aren’t any details on that split. That’s an unusual deal in sports, where most deals see networks pay a straight rights fee and then reap advertising rewards themselves. But there are many unusual elements with LIV Golf.

There certainly is a possibility to shake up the CW’s audience demographics towards older with live sports, especially versus much of the comics- and other younger audience-focused programming the network has carried in recent years. And golf in particular has long been known for an older audience. That’s not usually a good thing, with many broadcasters trying to emphasize how many young people their programming reaches, but in this specific case, LIV might fit with what the new-look CW is trying to do.

Any deal with LIV comes with massive amounts of controversy, though, and that’s part of the reason why LIV has had trouble finding a broadcast partner to date. Another part is that CBS, NBC, and ESPN all have PGA Tour deals, and the PGA Tour is in a protracted legal fight with LIV. Another part of the equation still is that the LIV audience on their YouTube streams was far from impressive. But they do now have a deal with a broadcast network. We’ll see how this deal works out for both sides.