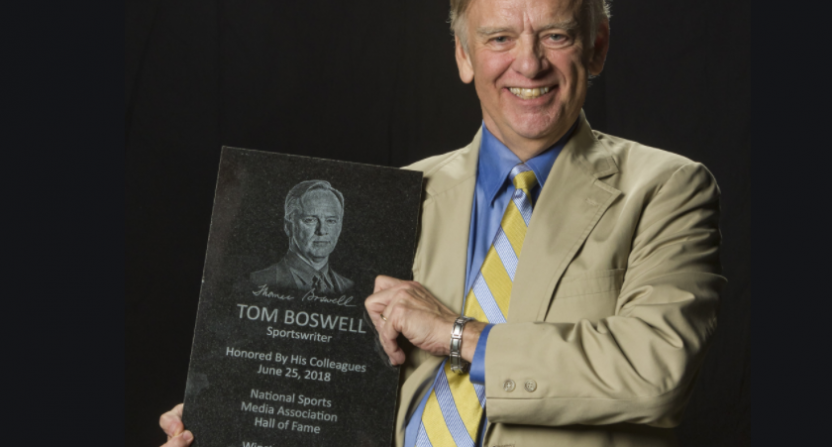 Many broadcasters do their jobs remotely from studios, watching the game from monitors rather than broadcast booths while reacting to artificial crowd noise. Reporters talk to players and coaches from a distance through Zoom calls instead of asking them questions in the locker room.

And as we’re seeing with the 2020 World Series, many of baseball’s most accomplished writers, some of whom have covered the event for decades, will not be traveling to Globe Life Park in Arlington, Texas to cover the seven-game series between the Tampa Bay Rays and Los Angeles Dodgers.

In a column published Monday (Oct. 19) for the Washington Post, columnist Thomas Boswell revealed that he won’t be attending this World Series due to COVID-19 concerns. At 73, he’s in a high-risk category for contracting the coronavirus.

This will be the first time since 1975 that Boswell, inducted into the National Sports Media Association Hall of Fame in 2018, hasn’t covered a World Series in person. By his count, he’s been to 252 World Series games as credentialed media.

Not going to the World Series is an especially drastic turn for Boswell, who covered last year’s Fall Classic for the hometown paper with the Washington Nationals playing the Houston Astros for MLB’s championship.

Boswell’s column is an ode to writing on deadline, fueled by adrenaline and passion. Crafting a good story under circumstances requiring multiple edits and changes, if not writing a piece all over again, is an art form that surely doesn’t receive proper credit as such.

I'll also say that I have seen Boz do amazing things in basically no time — coming into a particular game with a sharp idea of what he was going to write, and then blowing it up three or four times before he's done, on deadline. You can learn just by watching. He's a treasure.

Think about this: 45 years of covering World Series. If your favorite team won or you have a cherished World Series memory, Boswell was probably there and wrote about it better than anybody. Many of you reading this probably weren’t even born when Boswell began covering baseball’s pinnacle event.

While in the midst of sports playing — or returning — following a five-month shutdown, perhaps we don’t yet have proper perspective on just how much we’ve lost with reporters covering events from afar. (Though watching Zoom interviews and reporters talking to athletes for postgame interviews standing six feet away while a tech holds a microphone on a pole certainly reminds us that life isn’t normal.)

Boz! Thanks for writing this. Gave me goosebumps. It's been an honor being by your side for 16 of them. Won't be the same without you this year https://t.co/gNlwkGm9WG

What’s missing is the storytelling. Clubhouse conversations with players who aren’t stars, maybe for whom their path to a World Series is a tale worth telling. Observations from those whose experience tells them to look for what others aren’t seeing, or whose fresh take on events may reveal something new.

It’s inexplicable to imagine not reading a Boswell World Series column that, as he puts it, may have been finished at 1 a.m. for a newspaper delivered by 6 a.m.

Surely, he’ll still write something on the Rays and Dodgers; a poor decision by Dave Roberts, a home run by Randy Arozarena, Kevin Cash disregarding conventional baseball strategy, perhaps redemption for Clayton Kershaw. And that piece will still be wonderful. But Boswell should’ve been able to write it on his terms, in the setting he’s loved for the past 45 years. Here’s hoping he’ll be back in the press box next October.