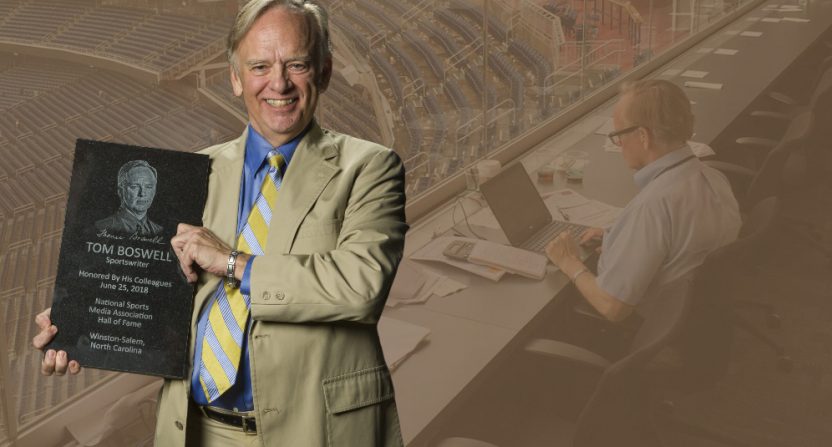 Sportswriting and newspapers are losing an all-time great this year with the Washington Post‘s Thomas Boswell announcing his retirement. He’ll continue writing columns and hosting online chats until June 30.

Boswell spent his entire writing career at the Post, joining the paper as a reporter in 1969 after graduating from Amherst College. He became a columnist in 1984, with executive editor Ben Bradlee naming Boswell and Tony Kornheiser to replace Dave Kindred, who left for the Atlanta Journal-Constitution. As Kornheiser joked on his podcast, Bradlee said, “Neither of you are good enough to replace him one-on-one, so we’ll hire both of you to do it.”

That began a 37-year run as a columnist at one of America’s most renowned newspapers. Though Boswell was largely known for writing about baseball (many fans likely recall his appearances in Ken Burns’ Baseball documentary), he covered virtually every sport in Washington, D.C.’s rich sports scene including golf, the NFL, college basketball, the NBA, tennis, boxing, and the NHL. He finally got to cover a World Series champion for the home team when the Nationals won the trophy in 2019.

Other major local events he covered include the Redskins winning Super Bowl XVII in 1984, 1988’s Super Bowl XXII, and Super Bowl XXVI in 1992. He was there for the Capitals’ Stanley Cup victory in 2018 and Cal Ripken breaking Lou Gehrig’s record for most consecutive major-league games played. Among the significant national stories he covered were Tiger Woods winning The Masters in 1997 and his comeback victory at Augusta in 2019.

In 2018, Boswell was inducted into the National Sports Media Association Hall of Fame.

The general columnist role doesn’t quite exist anymore at many print and online publications (a reality made clear in a recent 60 Minutes feature on Kindred), but an established newspaper like the Post provided that platform for great writers like Boswell up until his retirement.

After 52 years at the Post, the rigors of traveling and remaining concerns with COVID-19 affecting access surely played a role in the 73-year-old Boswell deciding to call it a career. Last year, Boswell didn’t cover the World Series in person for the first time in 45 years due to being a high risk for contracting the coronavirus.

As I wrote at the time, “If your favorite team won or you have a cherished World Series memory, Boswell was probably there and wrote about it better than anybody.” Boswell’s storytelling was missed and that sort of writing is something we’re getting in increasingly short supply as publications focus on online media, along with the fast churn and short attention spans to which it often caters nowadays.

Boswell’s fellow columnist at the Post, Barry Svrluga, appeared on Kornheiser’s podcast to pay tribute to his colleague and share his admiration. He explained how Boswell was a great example of how the job was done. Maybe he’d arrive at the ballpark hours before a World Series game began with an idea in his head and begin writing it. But the ballgame might cause that idea to be shelved, demanding that another story be told.

As the game progressed and the paper’s deadline approached, reporters and columnists might have to write three or four different stories. “He wasn’t going to get beat by the game,” said Svrluga. “He’d beat the game.”

End of an era at the @washingtonpost: Tom Boswell, our great sports columnist, announced his retirement this morning after 50-plus years. Bon voyage, Boz.

In a column announcing his retirement, Boswell explained that it became apparent that it was time to retire, though Post editors urged him to stay in some sort of role. After 52 years of travel, late nights, racing to beat deadlines, and finding inspirations for stories, he’s ready for a rest.

“For many of us, age eats energy, both physical and mental. When that energy is what you always had in the largest quantity, and your standards refuse to change with the calendar, the result is that the job — to be done right — gets more and more, and everything else gets less and less. Nobody’s fault.”

Boswell’s retirement is the end of an era for generations who grew up reading him, Shirley Povich, Kornheiser, and Michael Wilbon in the Washington Post. Even if you didn’t get the paper, their columns were often available to readers across the country via syndication in the days before the internet allowed us virtually everything from everywhere.

The Post has always been among the best sports sections in the nation because of its great reporters and columnists. It will continue to be that with columnists such as Svrluga, Sally Jenkins, Adam Kilgore, Chuck Culpepper, and Jerry Brewer. But Boswell’s departure will leave a hole in that coverage, taking away a voice that gave Washington, D.C. sports its soul. And for anyone who appreciates great sportswriting, his words will be missed.

Sharing a press box with Tom Boswell was always an honor. He has a regal air about him, a rarity among ballwriters. He'd start clacking away at his keyboard and you'd know what he was writing was better than what you were. And because it was Boz, you were OK with that. https://t.co/UHFC3tB5wh

I remember reading "How Life Imitates the World Series" by @ThomasBoswellWP shortly after college and thinking, man, this guy is really good. I'd like to do what he does…A master and, for me personally, an inspiration. Thank you Tom Boswell. https://t.co/OCsKpn4WaK

What I’ve always admired about Boswell’s work is how honest it was. He never pretended his columns were literature. Nor did he ever succumb to fake, hot take journalism. Tom’s final column captures his decency. He’ll be missed by readers and peers alike. https://t.co/sGHKvfuGh4

Fortunately, the Post‘s great archive provides the opportunity to go back and read decades’ worth of Boswell’s columns. It’s a treasure that warrants reopening and visiting repeatedly in the years to come. He also wrote five books during his career, including Why Time Begins on Opening Day and How Life Imitates the World Series. There are so many stories and characters to appreciate as a sports fan, so much craft in those pieces worth studying and emulating as a writer.

As Boswell said himself, this is bittersweet. But it’s an opportunity to celebrate a columnist and storyteller the likes of whom we likely won’t see again. And his work will continue to inspire excellent writing for years to come, a tremendous legacy to leave for sportswriting and journalism.