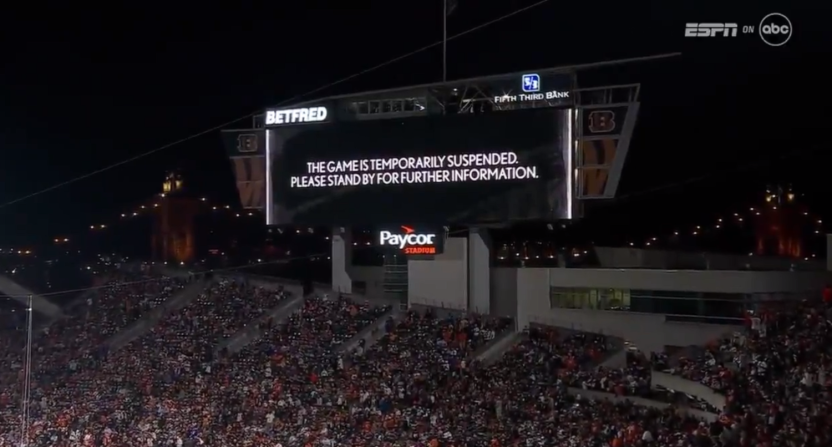 Damar Hamlin’s collapse on the field during this week’s Buffalo Bills–Cincinnati Bengals Monday Night Football game has spawned a lot of media discussion.  Some of the most notable may be on the divide between ESPN and the NFL around ESPN’s on-air mentions that the game would restart after a five-minute warm-up period. And that got a new angle Tuesday night thanks to a detailed Washington Post report on Monday’s events, from Adam Kilgore, Ben Strauss and Mark Maske.

First, a recap of the divide here. ESPN game announcer Joe Buck mentioned a five-minute warmup period and a resumption four times on that broadcast, and there were also mentions of this on ESPN Deportes and the Westwood One radio broadcast. But NFL executive vice president Troy Vincent said on a conference call Monday night that “it never crossed our mind to talk about warming up to resume play” after the injury to Hamlin. On Tuesday, both Buck and his company defended their mentions of that five-minute warmup, with ESPN saying they had “constant communication with league and game officials” and Buck saying rules analyst John Parry specifically got that information from league officials. Parry also appeared on-air himself 21 minutes in to the injury situation, and there discussed how the game was only “temporarily suspended.” So that’s led to a lot of discussion about who to believe. But this Post piece offers a potential middle ground where both Vincent and ESPN’s comments could be accurate:

Shortly after the ambulance left the field, Buck told viewers that the game would restart after a five-minute warmup period, based on information that had come from ESPN officiating analyst John Parry, according to a person with knowledge of the broadcast. During every Monday night game, Parry corresponds with the league’s officiating department about issues such as replay review decisions, then relays information to Buck and his analyst, Troy Aikman. But this decision had escalated beyond those with whom Parry typically communicates.

That last sentence is potentially the key. It makes absolute sense that Parry is in regular contact with the league officiating department during broadcasts. It also makes sense that that officiating department might relay a “five minutes” message. There have been mentions that five minutes is some level of “standard” procedure, in particular NPR’s “local TV station WCPO, which was carrying the game, noted that the five-minute warmup period is standard protocol after most delays” (however, that linked WCPO piece does not include that). It’s unclear if five minutes is particularly spelled out anywhere; it’s not in the 2022 NFL rulebook, and the injury timeout and referee timeout discussion in there is mostly about clock restarts, but there’s a mention of teams having to appear at least 10 minutes before a game for pre-game warmups, so five minutes seems like a possible standard for a restart (and that might be spelled out in a separate officiating procedures handbook or something).

If someone in the league officiating department did tell Parry “five minutes,” ESPN’s on-air discussion of this largely stands up. Of course, if there were no actual discussions of this amongst that higher-level team of Vincent, Aponte, Smith and Goodell that was making the actual decisions, it’s possible to criticize ESPN (and ESPN Deportes, and the Westwood One Radio broadcast) for relaying this report. But the broadcasters would have every reason to believe the league officiating department, and the information they got there seemed reasonable for them to relay (especially at a time where they were desperate for any update here). This just appears to have perhaps been a case where whoever in that department was communicating with the broadcasters overstated their own role in a resumption here, and that’s more of an error for that source than one for broadcasters in believing and relaying that information.

One small question mark is with Buck’s “As we said, they’ve been given five minutes to quote-unquote to get ready to go back to playing, that’s the word we get from the league and the word we get from down on the field” in his second of four on-air “five minutes” comments. The latter part doesn’t necessarily fit if “five minutes” was only mentioned by someone in the league officiating department to Parry. But it’s possible that sideline reporter Lisa Salters also heard something on “five minutes” and relayed it to the booth. And that could even have come from the officiating department talking to teams, or to the on-field officials, or even from a loop where someone with a team heard the first “five minutes” on the broadcast and spread it on the sidelines.

And if that is what happened, Vincent’s “it never crossed our mind” comment could be true. The Post piece suggests the key discussion on what actually would happen here appears to be the call or calls between Vincent, Aponte, Smith, and Goodell. And a coach told the Post their staff did not receive a five-minute message, and that they weren’t told anything until the coaches decided to take players to the locker room:

An assistant coach from one of the teams, who requested anonymity to discuss a sensitive matter, indicated no timetable for a restart was given to the coaching staffs and credited the head coaches for taking players off the field.

“Nothing was ever officially communicated like that,” the coach wrote in a text message. “I was up in the box, and we didn’t get much in the way of info. I think they were trying to figure out what to do, since it was so traumatic. And Sean and Zac, with input from players, decided to take teams to the locker room.”

Aponte does say later in that piece that “We remained in constant communication, as Troy said, with both teams, with medical personnel, with the game officials, with ownership. And we made decisions that we believed to be in the best interests of Damar’s status and the state of both teams’ players and staff.” But that “constant communication” may not have included any mention of the “five minutes” or of resuming play. And if that came from lower-level officials rather than this executive team that was actually making the decisions (in the end, the decision to suspend the game for the night, by rule, falls to Goodell), Vincent’s remarks saying they did not try to resume play could be accurate. Of course, there’s some reason for skepticism when it comes to public-facing comments from NFL executives made after they’ve been taking criticism, but the Post reporting here does provide a path where the comments from all of Buck, Parry, and Vincent are true.

Even in that case, though, there are still problems with the NFL’s approach to all this. First off, if “five minutes” came from someone who was not empowered to make that decision, that’s an issue for the league. And regardless of where it actually came from, the NFL deserves a lot of criticism for not quickly informing broadcasters there was no resumption plan, especially after the broadcasts started repeatedly mentioning five minutes. Yes, these high-level executives making the decisions were talking to each other, but they have a lot of people under them, some of who presumably were watching the broadcasts and could have told the execs what was being said there so it could be corrected. As publicist Gail Sideman wrote in a crisis communications analysis of this, the NFL has often reached out to broadcasts quickly on much more trivial matters:

— If anyone in the corner office heard (they likely did) play-by-play announcer Joe Buck say several times that teams would get five minutes to warm up before they resumed play and it was incorrect, NFL brass should have called ESPN’s on-site production truck immediately. NFL’s executive vice president for football operations, Troy Vincent, said that resuming competition wasn’t considered before the game was postponed. If not, why wasn’t producer Phil Dean, who would tell Buck to share with the public, notified? I’ve been in television trucks during games and the NFL has called for much less serious reasons.

There have even been some prominent seeming recent examples of that, like Cris Collinsworth‘s quick change of terminology around Tua Tagavailoa‘s past injuries after a commercial break:

And here's Cris and Mike Tirico after the commercial break (and presumably after a call from the NFL) clarifying that remark. (2/2) pic.twitter.com/y9G7GzBvgp

So, at the very best for the NFL, ESPN’s story is completely inaccurate and no one with the league gave the “five minute” information (which seems unlikely). The next-best case for the NFL is that the league had people communicating to broadcasters decisions they were not empowered to make, and that no one with enough power to correct that was informed of that until later. Worse still is if an early correction was possible and yet was not made.

None of those are particularly good looks for the league. And they probably speak to some policy and procedure changes that should be made to prevent a reoccurrence of anything like this. There also perhaps should be some discussion of finding a way to make the “suspended for the night” call earlier. But any of those options seem better than a irreconcilable split between Vincent’s post-game comments and what was said on the ESPN broadcast. An unbridgeable divide would mean one side or the other was lying; this report at least presents a pathway where that might not have to be true.