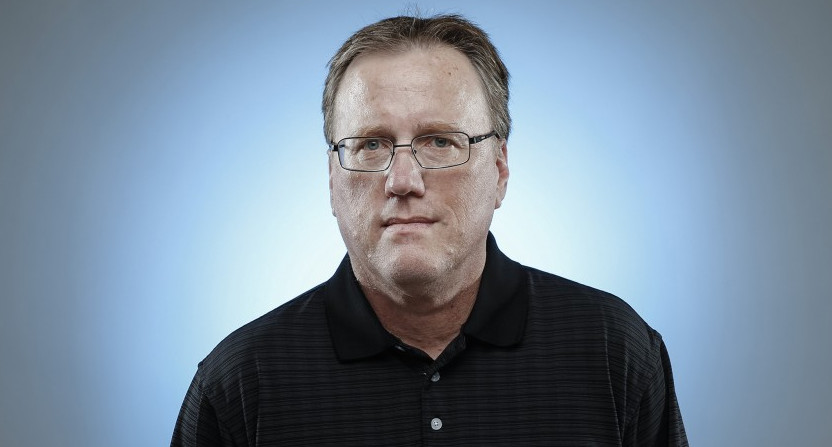 Chris Dufresne, who started at the Los Angeles Times working in the loading dock in 1976 and then spent 35 years at the paper as a sportswriter through 2015, passed away at 62 Monday night. As per a LAT obituary from Dufresne’s long-time colleague Sam Farmer, Dufresne died of undetermined causes while dining at home with his family, but had been awaiting results for “what appeared to be a late-stage melanoma recurrence.”

Dufresne covered all sorts of sports over his Times career, including the USFL, the Olympics, golf, and the Los Angeles Rams, but gained particular fame for his coverage of college football and basketball and his weekly “Rankman” column on those sports. He won several awards, including California Sportswriter of the Year from the National Sportscasters and Sportswriters Association in 2011. Farmer relayed several nice tributes to him:

“His writing, always rock-solid reporting, had this verve,” said longtime Sports Illustrated writer Austin Murphy, now of the Santa Rosa Press Democrat. “He was bracing, funny, a pleasure to read, and more of a pleasure to sit and tip a pint with.”

…“While I didn’t always love what he had to say about me or my program, I respected his opinion and his balanced approach,” said Rick Neuheisel, whose football career included coaching stints at Colorado, Washington and UCLA. “It was clear that he loved the game and worked hard to understand its nuances. As a coach, that’s all you can ask for from a journalist.”

Said Times colleague Bill Plaschke: “His stories … were must-reads nationally, and carried a resonance that helped define the current college football era. Duf’s hilarious weekly Rankman ratings were the cause of both laughter and outrage, and his weekly college football roundups were the stuff of poetry.”

ESPN’s Gene Wojciechowski wrote, when covering a college football game, “there was no better moment than when you walked into a press box, looked at the seating sheet, and realized that Chris Dufresne of the L.A. Times would be sitting next to you from kickoff to deadline filing. … He was revered and respected, of course, but most of all, he was liked — universally.”

After Dufresne took a buyout from the Times in 2015, he teamed up with former newspaper writers Tony Barnhart, Mark Blaudschun and Herb Gould to launch TMGCollegeSports.com, a subscription website dedicated to college football coverage. Gould posted a tribute to Dufresne that can be seen at Sports Illustrated (where TMG now lives as part of the Maven network):

I remember when Chris approached me with the idea of starting a free-wheeling college football website. Four old sportswriter buddies would gather in one place from the four corners of the country. Chris in L.A., Mark Blaudschun in Boston, Tony Barnhart in Atlanta, me in Chicago—and put on a show.

We would write what we wanted when we wanted. Chris was taking a buyout at the L.A. Times, but still wanted to write about the college sports scene that he loved. And he correctly had the feeling that Mark, Tony and I felt the same way.

It seems like we were just getting started. But then, I feel that way about Duf, as he was universally known. Sixty-two years old? This is cruel and wrong. And words can’t describe the empathy I feel for his wonderful wife, Sheila, who turned Chris’ TMG dream into reality, designing our website and guiding four old scribes through the modern digital obstacle course that went with it.

…He was cynical, a common trait among good newspaper people. But he also was gentle and understated. He was interesting, but he always was interested. He always had time for people. He had a great perspective on life.

Bladschun also posted a tribute to Dufresne at SI:

In a business where egos can run amok, often far out distancing the talent level , Duf was the opposite.  He never over promoted or did much of self promoting.

What he did do–better than most of us, was doing his job in a clear, entertaining fashion.

He was a college football writer, who turned his seasonal character of Rankman into a must read each week.

He was a feature writer with a human touch.

He was an Olympic writer who found the stories in sports people only cared about every four years.

Those tributes, and many more, show just how much Dufresne will be missed. Our thoughts go out to his family and friends.