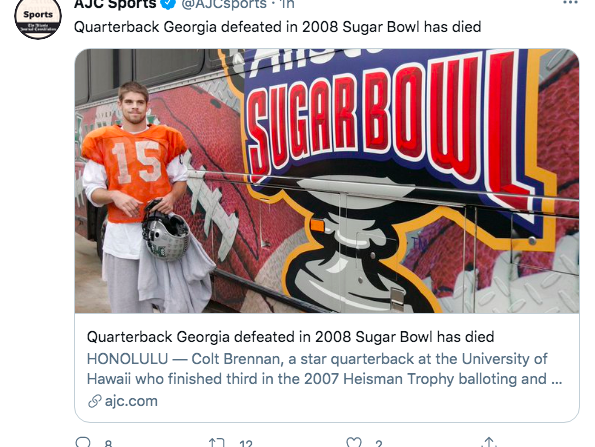 On Monday, former Hawaii quarterback Colt Brennan passed away at the age of 37. On Tuesday, many news outlets reported on Brennan’s death as the story went public. Most outlets went conventional with their headlines about the story and was respectful of the fact that a human being died. The Atlanta Journal-Constitution went in another direction and then made things worse.

After two hours, @AJCsports deleted the problematic tweet and posted another tweet linking the article. Although instead of mentioning Brennan by name, they went with the same “Quarterback in 2008 Sugar Bowl has died” headline as in their story.

I’m just speculating here but how the Atlanta newspaper got to this point was that they seemingly got too cute trying to make their headline unique for SEO reasons. They syndicated the article from the Associated Press, which hundreds of sites across the country have the rights to do that. So in their mind, while everyone has some version of “Hawaii QB Colt Brennan passes away” as a headline, The AJC instead went their own way with the regional headline to try and get clicks from the mostly Georgia-based readership.

That process, while inconvenient at times, works. Having said that, there are times to do it and times when you don’t, and you especially don’t do it when you’re reporting on someone’s death because it looks like you’re desperate for clicks and it comes across as being insensitive. Which is how many people felt in the replies to their tweet(s).

If you’re hellbent on using a crappy headline, how about instead of letting a bot generate your tweets for you while using said crappy headline, you have someone login on the @AJCsports account and actually create a tweet. Something like “Hawaii quarterback Colt Brennan passed away at the age of 37. Brennan’s final college game was against Georgia in the 2007 Sugar Bowl.” That would’ve saved a lot of embarrassment.