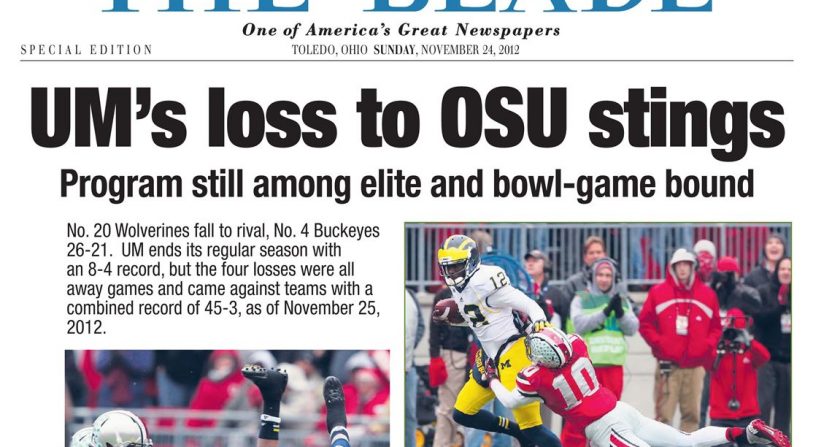 This morning, Toledo Blade sports writer Nick Piotrowicz took to Twitter to publicly share his growing frustrations with his employer. His tweets only tell a portion of the growing rift of distrust, low morale, and friction between the Blade’s sports department, editor Scott McNeish, and the higher ups who have signed off on controversial decisions,  fueling what has been called a quickly decaying, untenable situation. 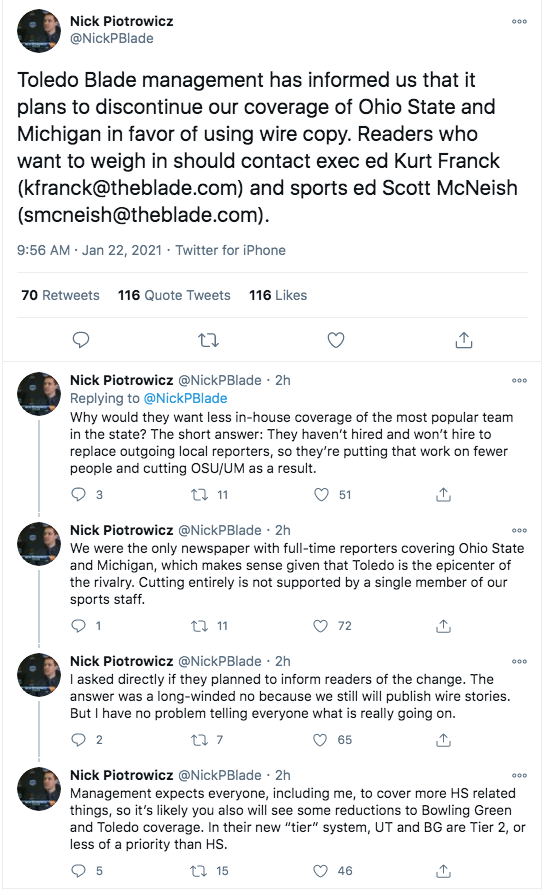 Tensions have been building for quite awhile.

In December of 2018, well respected sports editor Jeff Svoboda left the Blade to take a job with the Columbus Blue Jackets. Per sources, the Blade whiffed on quite a few internal and external hires before opting to bring in McNeish. At the time, his hiring was met with a very tepid reaction, including objections that McNeish had never actually held a beat coverage job, was coming from a much smaller paper located in Adrian, Michigan (population of around 20,000, more than ten times smaller than Toledo), and that McNeish would continue to live in Adrian and wouldn’t spend as much time cultivating the relationships needed within the Toledo sports community. Despite the lack of enthusiasm about McNeish, the situation was largely considered “manageable but not ideal”.

Things began to deteriorate this past fall when McNeish began to alter the roles of the staff. Prior to McNeish’s arrival, Brian Buckey had been tasked with covering the University of Toledo, Ashley Bastock covered the University of Michigan, and Kyle Rowland was covering Ohio State. McNeish sought to improve the paper’s coverage of Toledo and reassigned Bastock to cover Toledo, while Buckey was moved to the copy desk. Bastock had distinguished herself covering Michigan and was viewed by her peers as an up and coming reporter. Her reassignment drew criticism from both readers and others on the Michigan beat.

The Toledo beat has gained a terrific reporter in Ashley Bastock but what a loss for Blade readers who have appreciated her hard work covering Michigan football and basketball. I’m extremely disappointed to lose my front-row seat watching her work on a daily basis ??? https://t.co/CzNwsnqGjx

Two months later, Bastock left for the Blade for another paper. Sources say she viewed her change in role as a demotion, short sighted, and not well informed by leadership.

One day when I am ready (and quite honestly have the time) I will share more thoughts about all of this. I was obviously very much affected by these decisions towards the end of my time in Toledo.

This past season, with Bastock now covering Toledo, Michigan coverage was now absorbed by Rowland, the Ohio State beat writer. A quick glance at the Blade’s Michigan football section reveals that the bulk of recent stories are from wire service, which is to be expected when you have one reporter covering two schools separated by 200 miles going in opposite directions on the field. 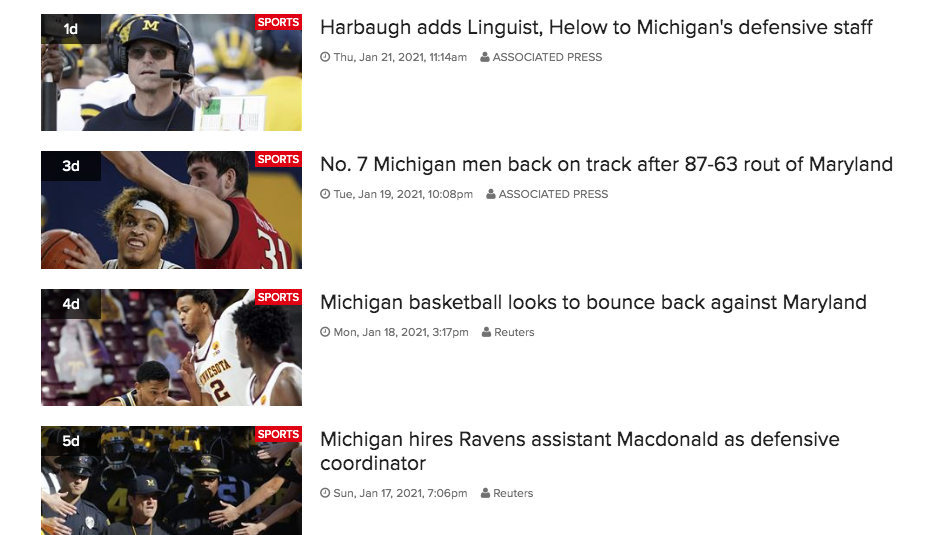 Rowland, who is considered by many to be one of the top Ohio State reporters in the country, did his best to cover both beats and press conferences done by Zoom certainly helped a bit. That said, the drop in coverage was noticeable, especially on the Michigan side, which suffered with Bastock’s reassignment and the lack of a full-time replacement. Rowland’s reward for working in the dual beat reporting role came in yet another reassignment, as McNeish looked to have Rowland fill Bastock’s two month role of covering Toledo, a reassignment that had already ran off one prized reporter.

A former sports staffer at The Blade, helped me distill the unique difficulty the paper faces in allocating their resources given the market they are in.

“It’s VERY hard to cover sports there. Because there’s nothing everyone loves. It’s not Cleveland and the Browns. Everything is split — OSU-Michigan, Toledo-BG, Detroit-Cleveland. And then the pro sports there are minor league, so it’s really hard to draw eyeballs to your work. It really makes it a challenge to decide how to staff things.

If I was sports editor, I would have fought tooth and nail to not eliminate OSU/Michigan coverage because they’re both very popular in Toledo, but the reality is they can be kind of expensive to cover, they’re not as local as other things, they take manpower, and the reality is digitally, you can’t compete with Eleven Warriors or MGoBlog or whatever. So I get why as a paper you’d consider backing off those beats when resources are finite. But it’s also backing away from something your readers care about, and it makes it look like you’re raising the white flag as a company.”

But it wasn’t just Rowland and his new Toledo beat who was informed of a new direction in their role. In an email sent out Wednesday, McNeish explained a new tiered system of coverage that made high school sports a top priority for almost the entire sports department.

To make our new direction visibly easier to understand, we are categorizing our content with a tier system. Our direction moving forward is to use our staff for as many Tier 1 and Tier 2 stories as possible.

Note: Dave Briggs and Matt Markey are exempt from this.

■ With high school being a top priority, high school coverage is being added to every reporter’s job description starting Jan. 24. That means every reporter still has their designated beat(s), but anyone, not just Steve or Mark, can be assigned any high school content on any working day. Adjustments to schedules will be made when necessary.

■  This also means every reporter, not just Steve and Mark, is eligible to do weekly stats, spotlight athletes, write All-Blade stories/capsules, and compile season previews for football or basketball.

■  This also means everyone is eligible to cover high school state finals and/or championships. Using stringers for those is the last option.

■  Dave Briggs and Matt Markey are exempt from this.

The reaction to the new tier system was universal outrage, and a subsequent Zoom call did little to quell concerns. Managing Editor Kim Bates and City Editor Mike Brice attended the call and were vocal in both supporting the new tier system and backing McNeish’s vision going forward.

The new direction was the last straw, and one that the staff believes goes against the preferences of readership and plain common sense. It was clear to the staff that McNeish had no feel for the sports scene in Toledo and the readership’s coverage preferences. One individual with insight into the decision succinctly explained that “The Blade is underestimating who they are. They aren’t some local podunk local paper who should be concentrating on high school sports. It’s a larger paper in a medium sized metro area.”

Multiple sources called the situation untenable, and some of those feelings extend beyond just the lack of confidence in McNeish. Earlier this month, the Blade’s newsroom held a byline strike in the wake of the Capitol siege, feeling that ownership had massaged the paper’s coverage to distance Trump’s connection to the insurrectionists. This is one of many reported incidents highlighting the growing tension with the newsroom versus leadership and ownership.

Awful Announcing reached out to McNeish and Bates, but has yet to hear back. Given the level of acrimony and distrust between the sports staff the editorial decision makers, it seems clear that one way or another, there will be additional changes. Whether that results in the Blade reversing course in some of these decisions, more staff members leaving as Bastock did, or changes in the paper’s leadership structure, it’s quite clear that the status quo cannot endure these feelings made public.