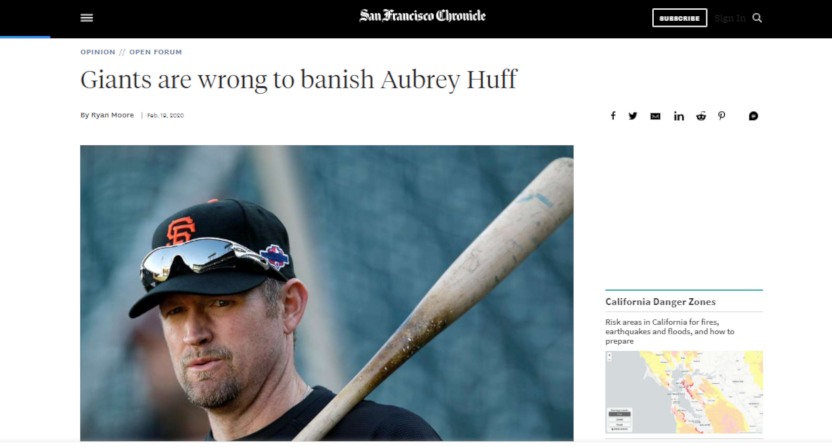 Newspapers have a long history of running opinion pieces from those not on staff, but that can create a lot of controversy. The latest one along those lines comes from The San Francisco Chronicle, which amid the hullabaloo about the Giants not inviting Aubrey Huff to their 2010 World Series team reunion, decided to run an opinion piece from Washington, D.C.-based “Writer/Songwriter/Actor/Social Media Strategist” Ryan Moore titled “Giants are wrong to banish Aubrey Huff.” But that piece only lived for a few hours Wednesday (it lives on in a cached version here), and was eventually replaced Thursday by a “Note from the editorial page editor” which reads as follows:

An Open Forum piece posted Feb. 19 was removed after its main premise – that former San Francisco Giants player Aubrey Huff was being banished from an on-field ceremony because of his support of President Trump – was overtaken by Huff’s acknowledgement that he was not told that by Giants management.

Here’s how the piece from Moore (who identifies himself as a Trump supporter both in the piece and in his Twitter bio) specifically stated that premise:

According to Huff, Giants CEO Larry Baer said the board did not approve of Huff’s tweets or his support of President Trump. Huff’s support of the president of the United States should in no way be relevant to his participation in the 2010 team reunion. The majority of the players from the 2010 team are not from California. Many of them are from the 30 states that put Donald Trump in the White House. 62.9 million people voted for Trump in 2016 and it’s a safe bet that Huff was not the only member of the 2010 team who voted for Trump, or who now supports Trump.

Funnily enough, at least part of Huff’s acknowledgement that he was not told that appears to have come from another piece in the Chronicle. That piece, where Chronicle Giants reporter Henry Schulman spoke to Huff, was published Thursday. Huff told Schulman he believes it was his support of Trump that saw him not invited (rather than the Giants’ listed reasoning of “multiple comments on social media that are unacceptable and run counter to the values of our organization“), but that the organization did not specifically tell him that:

Two days after the Giants issued a statement saying they would not invite Huff to a 10-year reunion of the 2010 World Series championship team in August, he reiterated his belief that he was singled out not because of a handful of tweets that many viewed as misogynistic and threatening, but because he’s a Trump supporter.

Huff acknowledged that Giants President and CEO Larry Baer did not specifically tell him that when he phoned three weeks ago to relay a decision that management made in consult with the Giants’ board of directors.

In fact, Huff said, Baer was “vague and standoffish” when pressed on which tweets upset the Giants. Huff said when he asked Baer if his Trump backing was the cause, Baer paused before answering and remained vague. From that, Huff inferred that his suspicions were correct.

So, yes, Huff may believe that his support of Trump was what saw him not invited, but “According to Huff, Giants CEO Larry Baer said the board did not approve of Huff’s tweets or his support of President Trump” is factually incorrect following those remarks from Huff. So taking down that piece makes sense at that point. But this piece never should have run in the Chronicle in the first place, and pulling it gave Moore an excuse to start ranting about “cancel culture” and “censorship”:

It appears my piece published for 5 hours in the San Francisco Chronicle today about cancel culture, censorship and @aubrey_huff was taken down due to cancel culture and censorship. https://t.co/xQYhcbTXw6

Where Moore is correct is that Huff quite likely isn’t the only member of the 2010 team who voted for or supports Trump. And if that had been a stated reason for not inviting Huff to the reunion ceremonies, there could be an argument here; a professional sports team specifically saying that support of a particular political candidate is a reason to not invite someone to an event would go well beyond what’s usual, and would create a lot of debate.

But that’s not what the Giants said at all. And it seems more likely that it was other Huff tweets that were considered to be “unacceptable and run counter to the values of our organization,” from proposing kidnapping Iranian women to saying he was training his kids to shoot in case Bernie Sanders becomes president because “knowing how to effectively use a gun under socialism will be a must.” In fact, MLB.com’s Maria Guardado wrote Tuesday in a piece on the Huff news that “The Giants made clear that Huff’s exclusion was not spurred by his political views, but rather the misogyny and obscenity he’s expressed on multiple occasions on Twitter. ”

Also, while the Huff decision was reportedly made and relayed to him earlier this month, further reasons to not invite him to this celebration have popped up since then. In particular, this week saw Huff go off on new Giants’ coach Alyssa Nakken. Here’s what he tweeted Sunday:

And on Tuesday, Huff delivered a radio attack on Nakken and female coaches in general, saying “I don’t believe a woman should be in men’s pro sports…There’s so many more people, especially men, who grind it out who deserve that spot more than she does.” Most organizations probably wouldn’t support honoring someone who’d made those kind of remarks about one of their employees, and that employee might have some grievance issues if they did. So the case for the Chronicle to run Moore’s piece Wednesday was already pretty weak. And it’s notable that beyond the unsubstantiated claim about this being about Huff’s support of Trump, that piece also included Moore claiming that Huff’s tweets were unremarkable and that no one would have complained about them 20 years ago:

I would argue that it’s this type of progressivism that is in fact toxic. Does Aubrey Huff say and tweet some things that I would never personally say or tweet? Sure he does. But for God’s sake, he’s a professional athlete.

Has everyone on the Left completely lost their sense of humor? Locker room talk is now completely inappropriate and is toxic masculinity? Progressives want men to act like women now? It is not yet illegal to be crude and vulgar but I’ll bet most progressives would like it to be illegal and certainly want to ban anyone who is crude and vulgar from anything and everything. Twenty years ago, no one would have complained, or raised an eyebrow at anything Huff has said.

Running this piece was a remarkably dumb idea from the Chronicle in the first place, especially with it making a factual claim (“According to Huff, Giants CEO Larry Baer said the board did not approve of Huff’s tweets or his support of President Trump.”) that had no link or references, was specifically contradicted by the team’s statements at the time, and was later contradicted by Huff’s comments to their own reporter. And then pulling this piece got Moore to go off on the aforementioned “cancel culture” and “censorship” rant; apparently pulling a piece that’s now been factually refuted by both sides is “censorship” and “cancel culture” now. But Moore tweeted Thursday that conservative website Human Events is going to republish it Friday, so those looking for his factually-debunked claim that the Giants told Huff this was about his support of Trump should be able to find it there shortly.

In the meantime, this goes to show some of the potential dangers of running op-eds from those who don’t work for the paper in question. Yes, op-eds come with a disclaimer that the views involved don’t represent those of the paper, but that’s a distinction that’s not always clear to a wider audience. And papers bear a responsibility when they promote takes to their audience, whether those are from internal columnists, associated papers, or outsiders like Moore. Promoting questionable takes is bad enough, but promoting ones that actually contradict the facts is worse. And that led to the Chronicle looking particularly silly here.