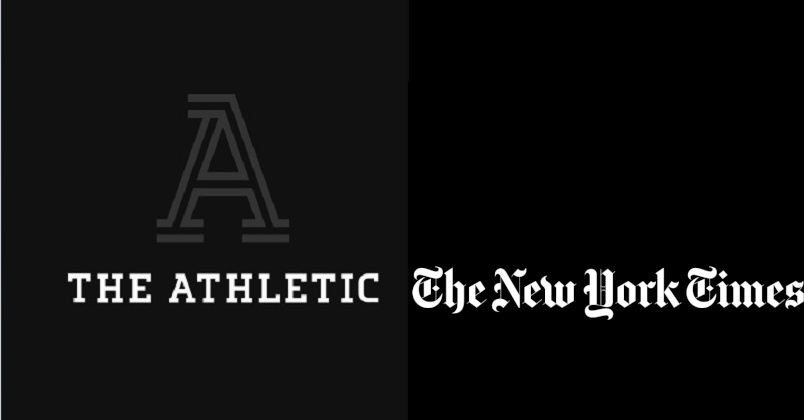 The New York Times‘ purchase of The Athletic (which saw serious talks start in May 2021 and ended with an actual acquisition this February) has led to some interesting discussion about what’s next. In May, a NYT earning call saw talk of ad sales at The Athletic and bundling subscriptions, things they’re both now implementing in some fashion. (In particular, they recently opened The Athletic up for those who already subscribe to the Times.) And in June, there was debate around the Athletic’s changes to their social media policies on politics. Now, the talk of at least potential big changes has gone further still.

That’s thanks to a new Washington Post feature from Ben Strauss. That piece sees discussion of a wide range of NYT-Athletic integration. And amongst that, there’s discussion around one specific part, how Athletic reporters have been told not to identify themselves as from the Times:

NYT writers are complaining about Athletic reporters "introducing themselves as Times journalists."

"One Athletic staffer, who had snapped a photo in front of the Times building in Manhattan and called it his new office, was asked to take it down."?https://t.co/W1doDVNvcz

Here’s more from Strauss’ piece, which is worth reading in full for its detailed examination of this:

The Times has started to promote the Athletic on its homepage and in its Twitter feed, which has sapped morale among the sports department of around 40 to 50 people, according to multiple staffers, who spoke on the condition of anonymity to discuss internal company business. (The Times declined to confirm how many staffers were on its sports desk.) The sports staff has had a series of meetings with higher-ups at the Times, including Perpich and executive editor Joe Kahn, asking questions about how work is promoted and how and whether they are supposed to compete with the Athletic on stories. This summer, the Times and the Athletic ran identical stories about a Yankees pitcher in the span of a few days.

Times sports staffers have also asked repeated questions about standards at the Athletic, the Times staffers said. The Times has created a team to examine Athletic policies and, going forward, will limit or at least need to sign off on journalists authoring books with players they cover, as some British soccer reporters have. And some Athletic reporters chafed at the Times implementing restrictions on political donations and commentary on social media, as Defector reported.

…If the Athletic’s newsroom were to unionize, it would almost certainly be its own bargaining unit, separate from the Times newsroom. And Times management would want it that way, rather than grow the current bargaining unit by hundreds of members. That is another reason that the Times would never want Athletic staffers to be able to say they are Times sportswriters, according to a person familiar with the Times-NewsGuild dynamic. Since the Times is committed to investing in the Athletic as a key tentpole of its subscription offering, one obvious way to cut some of its sports coverage costs, multiple staffers said, would be to shrink the Times’s sports desk, not through layoffs but by not filling jobs that come open.

The Times declined to comment on whether it planned to maintain the current size of its sports desk.

The bargaining unit discussion there is perhaps especially notable, and that’s specifically relevant to the eventual “Always identify yourself specifically as a representative of The Athletic (and not the New York Times)” policy the Times settled on. As Strauss notes, there were significant unionization discussions after the Wirecutter acquisition, which eventually saw the Wirecutter unit reach a deal with management last December.

It makes sense that any Athletic unionization would involve their writers as a separate unit. And it makes sense for Times employees (and particularly Times sports employees) to try and maintain the distinction between those two departments, especially if they’re worried their own staffing level may be cut. On that front, though, one quote in Strauss’ piece from former Times sports editor Jason Stallman (now helping the company with this transition) stands out: “The Athletic is trying to get the attention of hardcore sports fans. The Times is targeting general interest readers who are curious about the world. Yes, there will be some overlap of those Venn diagrams, but they are generally not competing.”

And that seems generally fair, and generally accurate on what these publications are doing. Much of what’s currently in the Times sports section is not in The Athletic, and vice versa. But there are three things worth watching there down the road.   One is what happens when there are stories both sides are chasing, especially around big events like this fall’s World Cup (which both sites are sending notable contingents too). Another is what happens with resource allocation (Strauss notes that Athletic NBA beat writers in particular have been given only a total travel budget of $2,100 for the remainder of 2022, likely meaning they can’t go on every road trip). And the last is if this does wind up in any of the NYT Sports downsizing many in this story seem to fear. We’ll see what happens with all that.