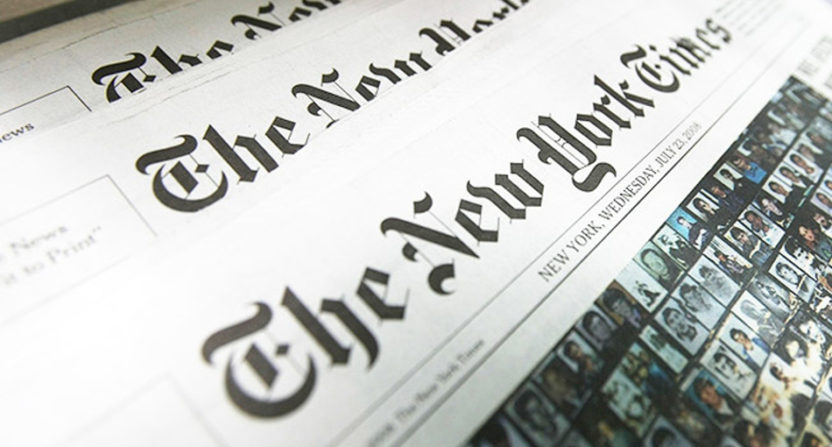 On June 15, the New York Times published an article titled “Michael Phelps Is Not Going to the Olympics, but His Wake Is,” an examination of the legacy that the most decorated Olympian of all time has left behind in the world of swimming. Penned by sports reporter Karen Crouse, the piece is a glowing description of Phelps and the way he is helping the next generation of U.S. swimmers hoping to follow in his wake.

“Five years into retirement, Phelps has exchanged isolation for outreach, sprinkling instruction and advice like the pope blessing his flock with holy water,” reads the article. “As a mentor, he has found a way to pull this U.S. team along in his wake without getting wet.”

The piece might not have stood out too much, given the obvious timing in the run-up to the Tokyo Summer Olympics. However, anyone who visits the article now will see an editor’s note, dated Tuesday, July 13, atop the page.

“After this article was published, editors learned that the reporter had entered an agreement to co-write a book with Michael Phelps. If editors had been aware of the conflict, the reporter would not have been given the assignment.”

To which some might say, so what? Perhaps this isn’t a big deal in the grand scheme of things, but the fact that Crouse has a financial stake in Phelp’s ongoing story and the much-needed visibility that will help promote his book, writing a NY Times article that acts, in theory, like free PR for that book, walks a very gray ethical line for the Gray Lady.

In an opinion piece of the Washington Post, Eric Wemple noted that the relationship between Crouse and Phelps was first mentioned on July 9 by Pat Forde in a Sports Illustrated article on Phelps.

Phelps was moved by tennis star Naomi Osaka’s recent comments on her mental health, and he’s made himself available as a resource for many in the swimming community to discuss their struggles. There is more to come: Phelps is working on a book with Karen Crouse of The New York Times that he says goes into greater detail about his struggles outside the pool.

Crouse didn’t really hide the fact that she was working with Phelps on a book, even if it wasn’t something mentioned in the NY Times article.

grateful mostly that @MichaelPhelps is sharing his story because he is helping SO many people by doing so. But also to be a small part of it https://t.co/uUbjkghuLz

Wemple says he asked the NY Times if they would be taking disciplinary action against Crouse beyond the editor’s note. A spokesperson told him that “As the editors’ note makes clear, the arrangement was a conflict of interest. This was a significant lapse in judgment. We are reviewing this matter and will take appropriate action.”