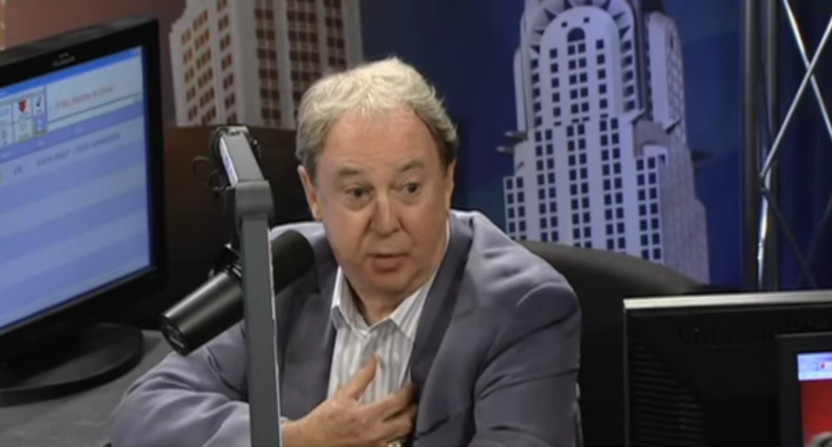 Last month, Bill Madden (a New York Daily News contributing columnist who previously worked for the paper full-time) made waves with a report about Orioles’ GM Mike Elias being investigated for pension fraud over the violation of a MLB rule that doesn’t appear to actually exist, a report MLB responded to as “simply false.” That saw no update or correction. Madden (seen above on Mike Francesa’s WFAN show in 2013) and the Daily News have now followed that up with a mind-boggling error that suggested the Philadelphia Phillies lost their entire estimated franchise value last year, but at least he and the paper bothered to change that after the fact this time (albeit with no acknowledgement of the correction). Here’s a screenshot of what Madden’s “MLB players face a bleak winter as reality of pandemic revenue losses set in” column initially looked like when it was first published Saturday:

Note that “nearly $2 billion this year” at the bottom? That figure is instantaneously absurd to anyone who follows professional sports in general, much less MLB in particular. In April, Forbes’ Mike Ozanian and Kurt Badenhausen estimated the Phillies’ entire franchise value at $2 billion  (eighth in MLB) as part of their annual franchise rankings. And as many noted, the Phillies’ year-to-year expenditures are nowhere close to $2 billion. Even if they’d had their full regular costs (which they didn’t thanks to a shortened season and no fans in the stands) and none of their normal revenue (which they didn’t; they still received some revenue from national and local media deals and other streams), they wouldn’t have lost $2 billion.

How absurd is that number? Well, Baseball Prospectus’ Jarrett Seidler noted that the team’s payroll was actually around $161 million. And as per that Forbes piece from April, the Phillies get the fourth-highest local media revenue ($112 million) annually of any team; they didn’t get all of that this year thanks to the shortened season, but they made more in local media revenue than most clubs. And in a reply to Seidler, Baseball Prospectus’ Rob Crain noted that the team made $73 million in operating income last year and spent $319 million in operating expenses, so the worst off they could be with no 2020 income and full 2019 costs (again, neither of which was the case) would be a $319 million loss. That’s still less than one-sixth of the loss Madden claimed for them, and attributed to comments from Middleton.

Funnily enough, after all this, the NYDN actually did update this story, with that figure now reading $145 million (a more feasible number, and one less than one-tenth what Madden initially reported). But there’s no note of correction attached to the piece. Here’s what those paragraphs looked like as of 8 p.m. Eastern Saturday:

Yeah, that’s a little more realistic. Of course, it still may not really reflect the Phillies’ actual numbers from this year; it’s being used to argue that teams shouldn’t spend money on free agents, after all, so the higher the number cited there, the more ownership can cry poor and decline to spend. But it’s at least a number within the realm of possibility, unlike the initially-published piece.

And what’s really funny here is that both Madden and the Daily News should have been well aware that the number in the initial piece was ludicrous. Even if you don’t pay particular attention to sports or to MLB, the idea of a MLB team losing $2 billion this year is insane. And Madden knows that well; in fact, he himself threw out a $186.1 million number for the Phillies back in October (in what really was a very similar “Owners say they’re broke, so believe them, players!” column). Maybe read your old pieces before you go around running absurd figures?

It’s not a great look for Madden to be so boldly and publicly wrong twice in just over a month. And it’s not a great look for the Daily News, which was previously in the news this week for the revelation from former staffer Charles McDonald that his collected observations and quotes from Jets’ practices were used without attribution by Jets’ writer Manish Mehta to make it look like Mehta still had access to the team. And now we have them running an insane figure in a column, then quietly changing it with no acknowledgement of the correction. Seems fine.