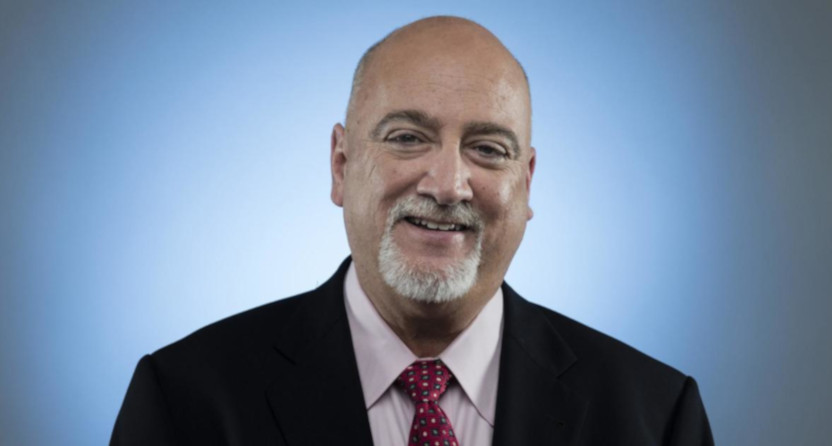 There’s long been discussion of “no cheering in the press box” in pursuit of journalistic objectivity, but it’s interesting that that idea has not frequently translated to “Don’t root for a specific city.” And it’s funny that we’ve often seen journalists who would not say that they support a particular team decide to support a particular city where they write, even to the extension of bringing up city-on-city results from a completely unrelated sports event. The latest case there comes from Bill Plaschke of The Los Angeles Times in a column published Friday with the headline of “Rams vs. 49ers will end like Dodgers vs. Giants — with an L.A. triumph“:

And, yes, absolutely, the same ending.

The Rams will beat the 49ers like the Dodgers beat the Giants, only it will be decided long before the final pitch, and there will be no whiny finish.

No check swings here, only one big hit.

Plaschke (seen at top in a LAT headshot) is an interesting journalist, as there have absolutely been times where he’s been able to rise above his status as a local hot take artist to deliver something worth reading. In particular, he wrote a notable book on a high school team impacted by the Paradise Fire (one that now may become a movie), and he discussed his personal battle with COVID-19 last summer. Nothing here is suggesting that we should throw the entire person out. But it is definitely interesting that he’s using a city-rooting appeal to try to draw links between Giants-Dodgers and 49ers-Rams, clashes in different sports between different ownership groups that have next to nothing in common.

And this is a funny thing in general. It’s rather fascinating that a lot of old media people decided that it was inappropriate for a writer or columnist to reveal that they rooted for a specific team, but to be fine with displayed rooting interests when they’re about the city as a whole. Of course, that doesn’t mean this will come to pass; it’s notable that this past October, Plaschke penned a “Dodgers were finished until Game 3 comeback. Now it’s the Braves who are on the ropes” piece. Here are some highlights from that:

The Dodgers will start Max Scherzer and Buehler on regular rest in Atlanta if they can just win one of the next two games here. Advantage Dodgers.

Yeah, no. The Braves won that series in six games and advanced to the World Series, which they won in six games. So it’s notable for those interested in the outcome of Sunday’s 49ers-Rams clash that Plaschke has a significant record of not being right.

At any rate, though, it’s definitely funny to see a Los Angeles-based columnist bringing up Giants-Dodgers like it has any relation to 49ers-Rams. If the Rams bring out Clayton Kershaw to play quarterback, we’ll have to revise this, but that seems unlikely. At the moment, it’s certainly interesting that a city’s main newspaper thinks it’s worth devoting column space for a “This happened in baseball, so therefore it will happen in football” piece. From this corner, that does not particularly seem worth a subscription.