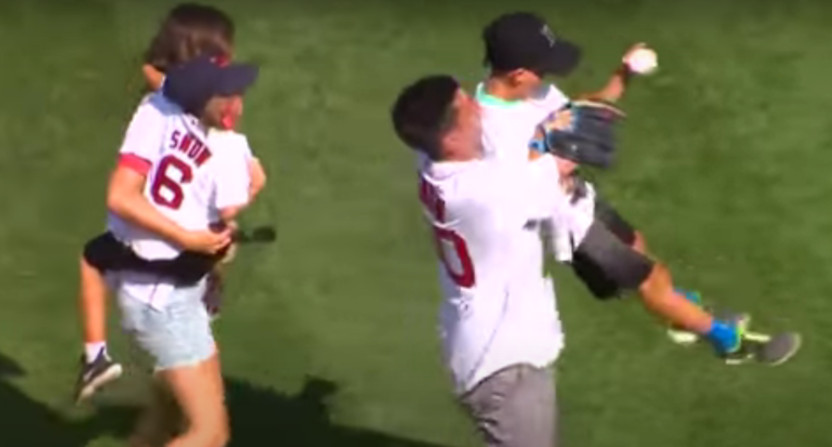 Calgary Flames’ assistant general manager Chris Snow has been fighting amyotrophic lateral sclerosis (ALS, or Lou Gehrig’s disease) for years, including with an official diagnosis in December 2019 that projected he’d only have six to 12 months to live. Snow has managed to battle well beyond that, though, and he’s inspired many along the way. Some of that was seen in the #trickshotforsnowy effort many Canadian media members and athletes took part in last summer.

One particularly notable thing for Snow was throwing out a first pitch for a Red Sox game at Boston’s Fenway Park alongside his family on Aug. 12 this year. Now, his wife Kelsie has penned a remarkable piece in the Boston Globe about that moment, looking back at the time when both she and Chris were covering that team for the paper. The piece is worth reading in its entirety, but here are a couple of highlights:

When I was 21 years old, I fell in love at Fenway Park.

I didn’t meet my husband in the stands or the beer line or during a shared smile over “Sweet Caroline.” Instead, we fell in love in the press box.

In the summer of 2005, I was a 21-year-old intern in the Globe sports department, and Chris Snow was the 23-year-old, newly minted Red Sox beat writer. We first met at the White Horse Tavern on Brighton Avenue in Allston, where my fellow Globe intern and roommate for the summer, Adam Kilgore, introduced us. It wasn’t long before Chris started driving me to Fenway. Adam noted subtly, “Snow has never offered me a ride to work.”

Last month — 16 years, two kids, and one terminal diagnosis later — we went back. We walked the hallways, hugged writer friends, and stood in front of the cameras instead of next to them. I pointed out the media dining room to Cohen, 10, and Willa, 7, telling them their dad and I had some of our first “dates” there in between filing pregame stories and first pitch.

…We stood on the first base line for the national anthem, and I watched Cohen and Willa standing in front of us, singing along, their hats pressed against their hearts. I put my arm around Chris. I told myself, in the way that you do when you are aware of how precious moments like this are, to be present, to remember, to soak it all in.

The anthem ended and our picture showed up on the Jumbotron. I listened to the PA announcer say “Melrose native Chris Snow” and tell his story, our story. Then I watched the people watch Chris. It’s a privilege to witness a miracle unfolding every day in front of your own eyes, and that’s what Chris is — a miracle. As we walked to the mound and all around the stadium, people stood to cheer, I knew they understood that, too.

Here’s video of Snow throwing out the first pitch there, from Boston ABC affiliate WCVB:

There are countless stories of relationships in the sports media world that haven’t worked out, but that maybe makes the Snows’ story all that more impressive. They’ve been together across three cities (Boston, Minneapolis, and Calgary), and across dramatically different jobs (with Chris starting as a media member and then moving into hockey operations, first with the Minnesota Wild and then with the Calgary Flames). And now they’re pushing on through an incredibly tough diagnosis, and one that has already caused a lot of pain in his family; at the time of his diagnosis, his father, two uncles, and a 28-year-old cousin had already passed away from ALS. But Snow’s Twitter feed remains a remarkable source of optimism:

A while back ⁦@SteveGleason suggested I keep a gratitude journal. To refer to on the hard days. I haven’t, but I thought of that just now. Few things are better than a day that looks like fall but feels like summer. It’s borrowed time. Just like life. pic.twitter.com/7IqqLBbkLq

And he had a lovely tweet about this piece from his wife, too:

And to think she asked me whether the @BostonGlobe would even want this. So grateful to have the former Globe intern I fell for tell our story. ❤️ https://t.co/48DDv23u7C pic.twitter.com/TwMneomjUG

There are certainly lots of challenges ahead for the Snow family. But the last two years have also shown an amazing level of support for them, from both the sports media community and the professional sports community. Hopefully that will continue going forward. Until then, Kelsie Snow’s piece here is well worth a read, and it illustrates what it can be like to have a loved one fighting such a tough battle.