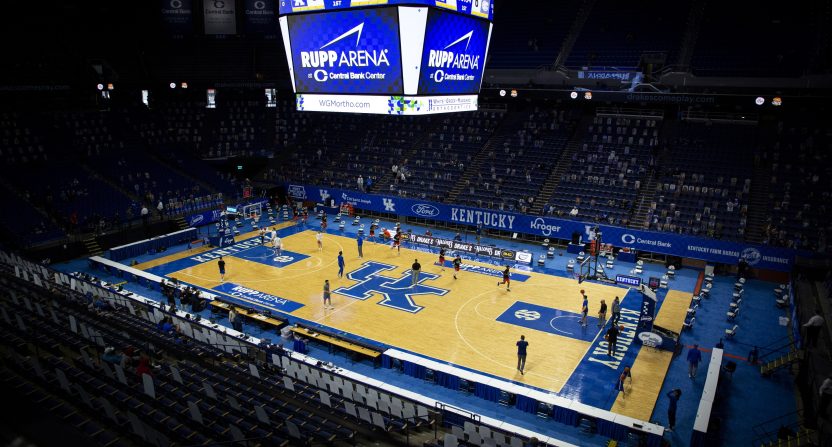 Here in the Commonwealth, there’s nothing bigger than the University of Kentucky basketball team. Outsiders might see this as hyperbole, but it’s (mostly) true. People care passionately and irrationally about their Wildcats. The desire to know every detail is insatiable.

For 41 years, Jerry Tipton chronicled the Bluegrass State’s blueblood program for the Lexington Herald-Leader. That remarkable run is over.

Tipton, the Kentucky men’s basketball reporter since the 1981-82 season, officially retired last week. It’s the end of an era and the beginning of a new one.

Ben Roberts, who covered recruiting previously for the newspaper, now takes over one of college basketball’s most prestigious and competitive beats.

When we talk about sports, we often speculate on how difficult it will be to replace an iconic coach or player. Try filling the shoes of an iconic scribe.

Tipton, 70, is a member of the U.S. Basketball Writers Hall of Fame and Kentucky Journalism Hall of Fame.

But it wasn’t just writing about the magical moments that set Tipton apart. Tipton became a legend by simply doing his job to the best of his ability every day. Beat reporting requires an extraordinary time commitment and dedication. Tipton exemplified those qualities.

Of course, most fans don’t know or appreciate this. It’s not all fun and games. You often have to chase down rumors. You have to confront people who may not want to talk to you. You have to meticulously sort through all kinds of information and misinformation. Being a sports reporter can be the hardest job in journalism. You work long hours at night and over weekends. That’s why most people on a beat don’t last long. It’s easy to burn out.

For Tipton to reach 41 years in an industry that has rapidly declined is incredible. According to the Washington Post, 2,200 local print newspapers have closed since 2005, and the number of newspaper journalists fell by more than half between 2008 and 2020.

Tipton wasn’t just a survivor. He thrived, delivering the news to an audience that craved his knowledge of Kentucky basketball. His readers might not have always agreed with him, but they respected him. He wasn’t afraid to ask tough questions. Calipari knows.

"This is a media day, not coach day." pic.twitter.com/R6Pf718dbn

Tipton was also respected by his colleagues and competitors.

Rick Bozich of WDRB-TV in Louisville, KY wrote that Tipton was the “first media guy in the arena. Last media guy to leave. Game after game. Season after season. Coach after coach — from Hall to Sutton to Pitino to Smith to Gillispie to Calipari. Tipton chronicled all of them — the championships and the stumbles. He did it in a town where some media people dress in team colors and wear Kentucky buttons. Tipton never did that.”

Others praised Tipton too when news of his retirement came out in late May.

End of an era in Lexington: Jerry Tipton, the tireless UK basketball beat writer for the Herald-Leader, is retiring at the end of June. Jerry was never afraid to ask the hard questions, no matter who was the coach.

Jerry Tipton’s retirement marks the end of multiple eras for Kentucky basketball. The Lexington Herald-Leader’s institution has been remarkably prolific, often profound and has maintained his enthusiasm and curiosity longer than much younger writers. Happy trails, Jerry.

In his farewell column for the Herald-Leader, Tipton wrote: “‘Work,’ which always seemed a misnomer, was watching ultra-talented players play and highly regarded teams compete. As a bonus, the setting could be a consequential game that further galvanized already zealous readers. And every so often, it felt like witnessing history.”

Nobody was a better chronicler of that history than Tipton. Here’s wishing him a happy retirement.