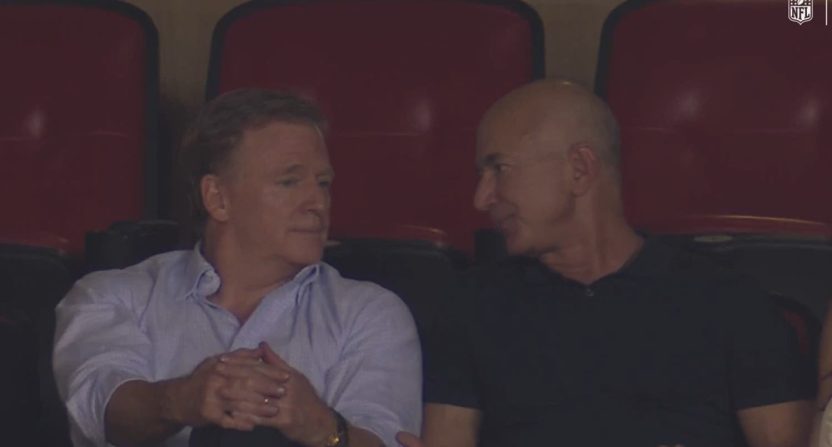 Amazon founder Jeff Bezos is a large figure in sports and media on several levels, with two of those being his ownership of the Washington Post and his reported interest in buying the Washington Commanders. According to a report from Josh Kosman of The New York Post, though, those two things may wind up being in conflict. And, as per Kosman, Bezos (seen at right above with NFL commissioner Roger Goodell on a Thursday Night Football broadcast in September) may sell the Post in order to convince Commanders’ owner Dan Snyder (who has long had grievances with that paper’s reporting on him and the team) to sell the NFL team to him.

Here’s more from that report:

Does Jeff Bezos love football more than he loves newspapers? That’s a question getting tossed around the nation’s capital as its NFL franchise hits the block.

Chatter is growing that Amazon’s billionaire founder is looking to clear the way for a purchase of the Washington Commanders by selling the Washington Post — with speculation boosted last month by leaked video of publisher Fred Ryan disclosing layoff plans at an unruly town hall meeting.

…Last week, Bezos stoked fears about looming layoffs at the Washington Post during an awkward visit to the newsroom. A source close to the situation said Bezos told the paper’s senior staff in private meetings that he had no plans to sell the paper.

Nevertheless, one logical suitor believes the Washington Post is for sale and plans to bid, a source with direct knowledge of the situation said, declining to name the suitor. A second source who buys and sells newspapers said he also has heard the paper might be up for grabs.

“I think Bezos’ people could go to Dan and say as a gesture of goodwill, ‘We are selling the paper,’” a source close to the situation said. “I think that would go a long way with Dan.”

There are, of course, many necessary grains of salt to consider here. One is the debate over if the Post is actually for sale, with Kosman’s piece also noting Bezos has not made that clear and has not retained a bank to explore offers. A second is if Snyder would actually turn down a higher offer from Bezos in favor of someone else he likes more (and how the NFL, which likes to maximize franchise values, would react to that). A third is if selling the Post would actually improve Bezos’ standing with Snyder. None of that is a clear yes, and DC sports columnist Rick Snider (of 106.7 The Fan) explored much of that in a reaction video Monday:

Rick Snider’s Washington says a report Bezos will sell the Post as part of his Commanders bid is nonsense. Gimme two minutes. pic.twitter.com/VE5wXNG5Jg

However, as Snider notes there, it is quite conceivable that Bezos could sell the Post. And it is quite conceivable that he could buy the Commanders. Whether or not there winds up being a causal link between those two things is up for debate, and there could also be causal links beyond “Snyder dislikes the Post.” For example, if Bezos did buy the Commanders and did not sell the Post, that paper’s coverage of the team going forward would come under huge conflict-of-interest scrutiny, and many parties involved might not want that. At any rate, though, it’s definitely interesting to read these sources’ comments to Kosman that the Post might be for sale, and that that might help Bezos buy the Commanders.