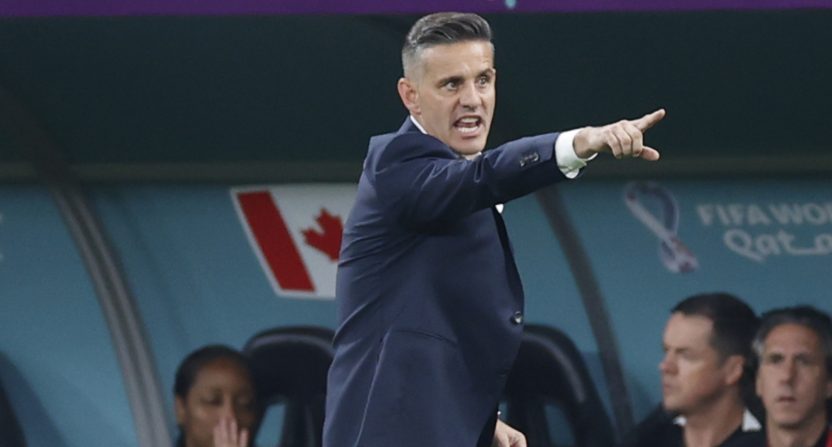 Following Canada‘s 1-0 loss to Belgium in the 2022 FIFA World Cup Wednesday, Canadian manager John Herdman was asked in a live on-pitch interview with the BBC what he told the team in a passionate post-match speech. He responded with “I told them we belong here, and we’re going to go and f*** Croatia” (Canada’s next opponent):

Canada's John Herdman after his side's hard-fought 1-0 loss to Belgium: "I told them they belong here. And we're going to go and F Croatia. That's as simple as it gets." The fiery 47-year-old maanger is pure CONCACAF Thunder, with a terrific haircut ??pic.twitter.com/24k8k78Zp8

On Thursday, when asked about that by Croatian media, Herdman clarified that he doesn’t have anything in particular against Croatia and means “no disrespect to the Croatian team and Croatian people,” but said “At the end of the day, it’s a mindset that Canada’s got to have if we’re going to have three points against one of the top teams in the world.” And that led to quite a cover response from Croatian tabloid 24sata (the highest-circulation newspaper in the country) Friday:

Croatian tabloids seem quite unforgiving towards Herdman, putting him on the cover despite Dalić's claim that 'Croatia will speak on the pitch'.

"You have the mouth (tongue)", this one says, next to the, well, stripped Herdman. "But do you have the balls as well?" pic.twitter.com/Z7b4Ncdomk

Now that’s a strategic maple reserve. This, unsurprisingly, led to lots of discussion in the Canadian soccer world. Some highlights of that:

That’s not a very flattering picture of John Herdman ? I think they’ve mixed up photos. This was his entry into the worlds sexiest man competition. ? #Can #CanMNT #WorldCup2022 @footy_prime btyb @NorthStarBet https://t.co/2HUoCaFxEu

Intentionally or not, what John Herdman has done is straight out of the coaches handbook: take attention off his players before a big game. Nobody is talking about Davies missed penalty, Jonathan David's disappearing act, the hunt for that elusive first goal, etc. I like it. https://t.co/PadtD69ebV

People soon forget the time Sir Alex Ferguson ran around the Trafford Centre naked the day after the Beckham boot to the face saga. No one did distraction better than Fergie… until now. https://t.co/lpG9RJoIg4

Those last couple of comments on Herdman (seen above during the Belgium match) skillfully using this to move the conversation on from that loss feel apt. And the 24sata response here only helps further with that. And the “balls” discussion is particularly funny, as some of Herdman’s comments in the initial remarks to his team that started all this were specifically emphasizing balls:

We’ll see if the Canada-Croatia war of words and images escalates any further ahead of their 11 a.m. ET match Sunday.