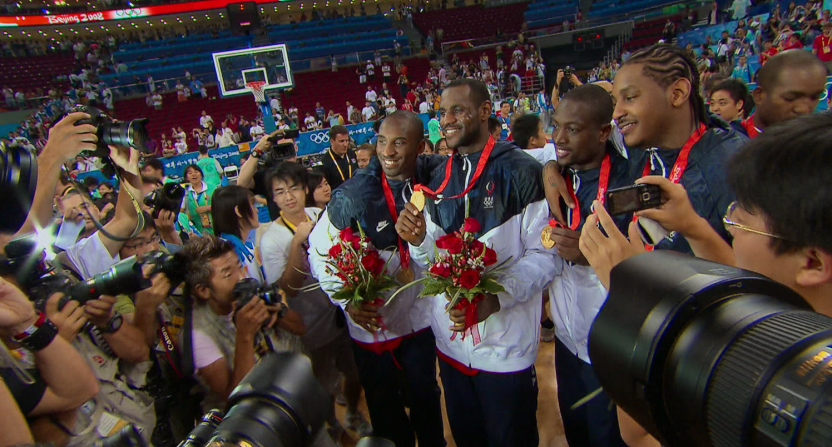 Netflix’s The Redeem Team documentary is supposed to be about the 2008 US men’s Olympic basketball team and how it restored the honor of American hoops by recapturing the gold medal. For the most part, it delivers in recounting the tale. But the focus of this documentary, executive produced by LeBron James and Dwyane Wade, is Kobe Bryant.

According to The Redeem Team, directed by Jon Weinbach, you can’t tell this story without discussing the redemption of Kobe Bryant. Seeing Bryant’s old interviews is both enlightening and slightly eerie. The footage of a young Bryant and an even younger LeBron sitting together and talking about the Olympics will always be fascinating. It’s a time capsule of excellence because of their stature in the game then and how their influence continues to echo today.

It’s still hard to believe that Bryant passed away tragically in January 2020. His accidental death looked like it would be the biggest news story of the year until the pandemic hit. America grieved his absence because so many watched him grow up from a phenom to a five-time champion. He was popular because his Los Angeles Lakers teams were so often in the NBA Finals.

As noted in The Redeem Team, Bryant’s reputation took a sizeable hit in the mid-2000s. Bryant was the guy blamed for running off Shaquille O’Neal, resulting in O’Neal being dealt to the Miami Heat in 2004 and ending one of the NBA’s greatest 1-2 punches of all time. Bryant was the one who publicly demanded a trade in 2007 from the only franchise he had ever played for. The documentary does not mention the 2003 sexual assault allegation against Bryant. The details of that accusation make Bryant’s legacy complicated because of what we know and don’t know.

All those things combined to tarnish Bryant’s previously stellar reputation.

The Redeem Team explains why Bryant and USA basketball needed each other. Both were looking to change the narrative on the biggest stage possible.

Although Kobe and the Lakers had just reached the NBA Finals thanks to the acquisition of Pau Gasol, they lost to the Boston Celtics, including an embarrassing 131-92 defeat in the closeout game. Team USA was dealing with its own embarrassments in international play, culminating in the 2004 Olympic semifinal loss to Argentina.

The Redeem Team, boosted by interviews with players James, Wade, and Carmelo, and Los Angeles Times columnist Bill Plaschke, provides plenty of context for this epic collapse. There was plenty of blame to go around. But there was also the realization of the dawning of a new age.

The world had caught up with us.

America was going to change its approach. This documentary goes deep in walking viewers through the involvement of Jerry Colangelo as the director of Team USA basketball and Mike Krzyzewski as the coach. The archival clips of uncensored Krzyzewski are great. Any hardcore college basketball observer will tell you that the expletive-spewing Krzyzewski is the real Krzyzewski. Not the polished version on television.

Krzyzewski reveals why it was necessary to recruit Bryant for Team USA. At that time, Bryant was known as a selfish player. However, he was also hyper-competitive, a champion, and someone with something to prove.

Those qualities in many ways made him an ideal leader. One of the best anecdotes in The Redeem Team is about the players coming back to the team hotel in the wee hours of the morning after partying in Las Vegas. Just as they’re entering the lobby, they see Bryant on his way to the gym. No staying out late for him. He was all business. Soon the rest of Team USA followed Bryant’s example by joining in on his early workouts.

The Redeem Team casts Bryant as the hero. You can’t deny his impact. He scored 20 points in the gold-medal-winning game against Spain. He helped restore Team USA to prominence. He improved his image. And he went on to lead the Lakers to back-to-back NBA titles to bring his championship total to five.

But what also stands out in The Redeem Team is how Bryant, often viewed as a loner, found camaraderie with his teammates. Perhaps that’s the real redemption story.

The Redeem Team is available to stream now on Netflix.

[Top production still from the IOC, courtesy of Netflix]