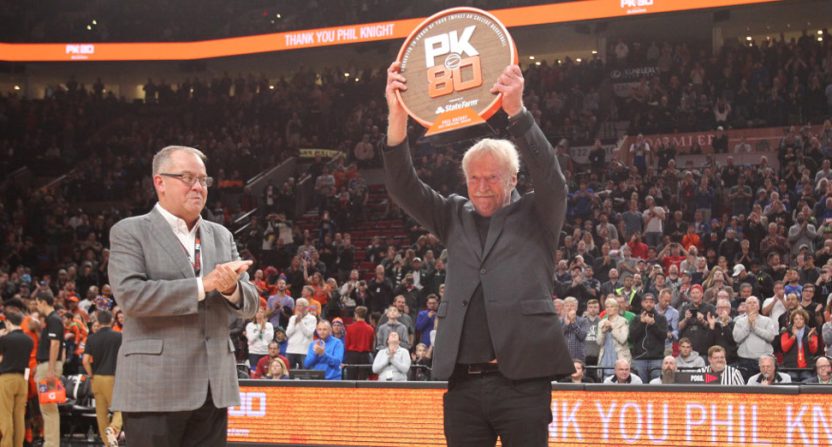 The latest sports-related documentary to be announced is a Netflix biopic on Nike founder Phil Knight. The company has optioned Knight’s best-selling 2016 autobiography Shoe Dog, and they have some heavy hitters involved. For starters, the documentary is going to be produced by Knight (seen above when his 80th birthday was honored with an invitational NCAA basketball tournament last November) and famed director and producer Frank Marshall, who’s been an executive producer on everything from Raiders of the Lost Ark through Jurassic World and Jurassic World: Fallen Kingdom, whose Kennedy/Marshall company (with wife Kathleen Kennedy, currently the head of Lucasfilm) has produced everything from Seabiscuit to the Bourne series, who’s producing the Five Rings Films series for Olympic Channel, and who directed the 2012 30 for 30/ESPN Films documentary “Right To Play,” on that charitable organization and founder Johann Olav Koss.

Netflix’s announcement mentions that Knight and Marshall met in an unusual spot; on the Back To The Future films.

Marshall and Knight have a relationship dating back to the 1980’s, when they met during the production of Back To The Future.

Quote from Frank Marshall: “Ever since our collaboration on BTTF and being a runner myself, I’ve always been fascinated by Phil’s story and how the company came to be. It’s an amazing tale about what the path to success really looks like, with its mistakes, struggles, sacrifice and even luck. It’s about how a company can grow with the right people, dedication, a belief in the power of sport and a shared mission to build a brand that would change everything.”

Marshall was an executive producer on that series, and it makes sense that Knight was involved considering the prominence of (for example) self-lacing Nikes in Back To The Future 2. One of the actual shoes used in that 1989 film sold for almost $100,000 at auction earlier this month, and Nike actually brought out a version of the Nike Mags seen in the film in 2011 (with only 1,500 pairs) and then again in 2017.

Anyway, it’s pretty interesting that that connection wound up leading to this. But that’s not Marshall’s only interest in running; in fact, he was involved in founding the Rock N’ Roll Marathon, and he’s run 15 marathons, including the Boston Marathon (he also produced last year’s documentary on the 2013 Boston Marathon bombings). And Marshall’s not the only one on this project with experience covering sports and sports-adjacent topics, as the screenplay will be written by Golden Globe and Emmy-winning writers Scott Alexander and Larry Karaszewski, known for their work on The People v. O.J. Simpson: American Crime Story and more.

A Knight biopic could certainly be interesting. He has quite the story of rising from selling shoes out of the back of his car to leading Nike to be the world’s biggest shoe and athletic apparel company. And there could be plenty of sports connections explored along the way, from Nike’s various marketing campaigns and sponsored athletes to Knight’s involvement with the University of Oregon and USA Track and Field. Beyond the specific sports sides to this, there’s also lots of interest out there in shoes and shoe culture, as well as in Nike’s growth. So it seems like there will be a significant audience for this. We’ll see how it turns out.