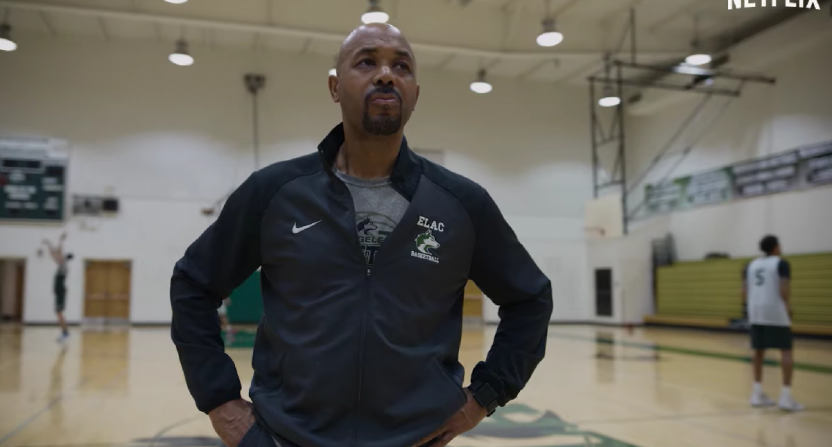 The upcoming edition of the series expands the scope of the show by focusing on basketball (giving us the utilitarian title: Last Chance U: Basketball), following the 2020 season for the East Los Angeles College Huskies, a junior college program.

Netflix released the teaser trailer a few weeks ago, and today we got our first extended look at the ELAC players and coaches featured LCU: B.

The team behind Last Chance U is tackling a whole new ball game.

Here’s our Ian Casselberry setting up the show’s arc from our post on the teaser trailer:

A public community college, ELAC’s basketball team is filled with former Division I players and recruits pursuing an opportunity to revive their careers and earn a spot at the top level of college hoops (and perhaps beyond). But the 2019-20 season for prep and college basketball teams was affected at all levels due to the COVID-19 pandemic.

How COVID-19 impacts the Huskies as they pursue the best record in school history and an elusive state championship will surely be a big part of the story told over Last Chance U‘s eight episodes. (OK, you could use Google to find out how the season ultimately ends. That would seem to take away some of the fun. But some viewers might like knowing that sort of thing before watching.)

In addition to a change of scenery and sport, the focus on basketball could make for an even more fulfilling show. The smaller roster compared to football means the show may be able to offer a more holistic view of the team, while the head coach’s impact and direct interaction with every player in basketball is also very well-suited for this format.

If you’re interested in checking it out you won’t have to wait long: the entire season premieres next Wednesday, March 10th.