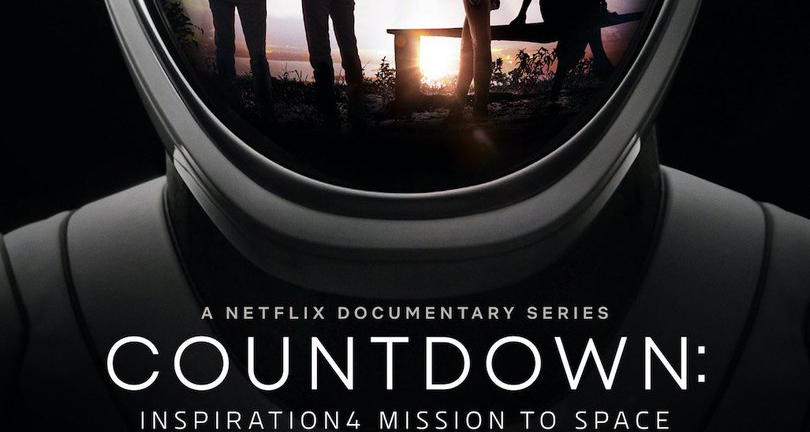 Netflix’s five-part docuseries Countdown: Inspiration4 Mission To Space, covering the Inspiration4 flight from September 16-18 (the first orbital spaceflight with only private citizens aboard, done as a charitable effort for St. Jude’s Hospital), has more sports connections than you might think. To start with, director and executive producer Jason Hehir is known for his sports work, including the Emmy-winning The Last Dance, fellow 30 for 30 installments The ’85 Bears, Bernie and Ernie, and The Fab Five, plus HBO/Ringer Films’ Andre The Giant, and much more. Hehir told AA in an interview last week that his sports work, especially his work on 24/7 for HBO, was crucial to putting together this  kind of quick-turnaround project, and even played a role in its inception.

“I was contacted by a friend of mine named Gabe Spitzer who’s an exec at Netflix [director, nonfiction series],” Hehir said. “He was my production assistant when I worked with HBO Sports. I produced [some installments of] 24/7 about two boxers leading up to a fight, I did [Oscar] De La Hoya – [Floyd] Mayweather and Mayweather – [Ricky] Hatton. And he was my PA. So we came from that background of tight-turnaround, real-time documentary. On April 1, he sent me a link to a New York Times story about the Inspiration4 and introducing the astronauts and said ‘Call me when you have a minute, let’s discuss.'”

“He said they’d acquired the story and they’d planned on doing a six-part documentary that was going to air in about a year. And both of us started immediately finishing each other’s sentences with ‘Why don’t we do this as a 24/7, as a real-time doc, and instead of leading up to a fight, do it leading up to a rocket launch? And we can turn this around within a week of them getting back to earth, a feature about this week of their lives, and then do four episodes leading up to it.'”

“So we agreed to do that. And then, once all the i’s were dotted and t’s were crossed, we were rolling cameras by a month later, in May. So I spent the summer with these astronauts going all over the country with them in their training, and it’s been a blur since then.”

Hehir said this stood out as a potential documentary given the stakes, as space travel still carries a lot of risks.

“I think that any good doc has two elements, and any good story really has two elements; characters and stakes. The characters in this, just by the fact that they’re willing to go to space and literally risk their lives on this mission, are going to be extraordinary just by the fact that they agreed to do it, that they signed up. And then the stakes, of course, are literally life and death. So we had a huge head start there.”

“Obviously, there’s inherent drama in sports, and all of us who are sports fans and the athletes themselves can tell you that it feels like life or death, and we try to convey that when we do movies about sports. But it is palpably different. I’ve been to Super Bowls, I’ve been to NBA Finals, I’ve been to World Series, and I’ve been nervous about those things, biting my nails and on the edge of my seat when my team is involved. But it is a vastly different experience to watch a rocket launch with four people who have become your friends, this controlled bomb going off underneath them and launching them into space.”

Hehir said it was also interesting shifting from sports documentaries, which are generally about person vs. person conflict, to a person vs. nature conflict.

“You try to have a protagonist and an antagonist in any story that you tell, and believe me, the antagonist here is nature. Nature’s undefeated. I think what inspired me about it was the ingenuity and the innovation and the strength of the human spirit to actually get off the planet and see the planet from that perspective, which only a handful of other people have ever seen it from before.”

He didn’t have a strong space background before this, but found the topic a worthwhile one to dive into.

“It was new territory for me. I knew nothing about space in April of this year and I still know very, very little of what there is to know, but it was very exciting for me to work on something a little bit different than what I’d done in the past.”

Hehir said this particular series was also notable there, as it wasn’t following career astronauts, but rather people outside of NASA and Space Force. He said that necessitated a different approach than what he’s used for his sports documentaries.

“They are not on the surface extraordinary, and that inspires me. I’m always interested in the de-iconization of icons, whether you’re talking about Michael Jordan or Andre the Giant or Mike Ditka or the Fab Five, people who are kind of two-dimensional in our imaginations culturally, I’m always interested in who the person is behind that caricature.”

“These people were not icons; they were de-iconized from the beginning. I’m always fascinated by ordinary people doing extraordinary things, and you can’t find a better example than that with these people signing up to get in a rocket and go to space, and having to learn what astronauts learn. They went through all of the exact same training as NASA astronauts, except they did it in a much quicker period of time. The amount of training they had to do, physically, mentally, the amount of studying they had to go through was extraordinary.”

Hehir said that was particularly notable with Hayley Arceneaux, the 29-year-old St. Jude’s physician assistant (and cancer survivor herself, and the daughter of famed Louisiana sportswriter and journalism professor Howard Arceneaux) who became the first astronaut with prosthetic leg bones. Hehir said when he first met her, Arceneaux knew less about orbital spaceflight than he did, but she threw herself into training and became a remarkable member of the crew.

“To see her the day they launched, they went through a rehearsal and read a script, it’s in episode five where they’re doing a thing called ‘chair-flying,’ they pretend they’re in space and they’re calling out all these codes, she sounds like a Top Gun pilot. Because she had mastered everything that they put in front of her.”

Hehir said the team’s successful landing wound up being quite emotional, as their meeting with their families came on a site once used for analyzing the 2003 Columbia disaster.

“The most extraordinary moment of this project for me was that on Sept. 18, the night they came back, they reunited with their families at a hangar at Kennedy Space Center. And it was the same hangar where the Columbia space shuttle was reassembled so they could figure out what happened. It was almost poetic; they’re tearfully reuniting with their families at this site.”

He said the moments after that were notable too, as that led to his team getting access to the footage the four astronauts here (Jared Isaacman, Sian Proctor, Christopher Sembroski, and Arceneaux) shot in flight. And that footage was remarkable and new.

“After they reunited, they had to go away for medical testing. So we were in that convoy with our cameras. And when we arrived at this building, which was strictly off-limits [to the general public]; it’s part of the Space Force base at Kennedy Space Center. So there’s security all around, and someone walks up to the car, and knocks on the window. I roll down the window, and they hand me a pouch with four cellphones, the cellphones that were in space with these astronauts just two hours before.”

“And we started sifting through what they had shot, and this was the first time that anyone had ever seen 4K footage of the Earth from 585 kilometers up. It was stunning. And to think that we were the first human beings to ever see this footage, that was extraordinary. I will never, ever forget that moment.”

The work of the Inspiration4 team made a big impact on people on Earth, too. Along those lines, Hehir captured this moment of Michelle Obama calling Proctor and the crew:

While much of what Hehir has done recently is further-after-the-fact documentaries like Andre The Giant and The Last Dance, he said the tight turnaround deadlines here were much more like his 24/7 work more than a decade ago. And he said the two types of documentaries are widely set apart, but both of them have their advantages.

“It’s much different. It’s like playing two different sports. In a way, the concentrated deadlines are grueling; I’m in bed as I talk to you right now, just because I’m exhausted. But there’s a certain liberation in that you know when it’s going to be over. On a project like The Last Dance, that went on for over a year more than we thought it would last.”

“So it’s one thing when someone says ‘Sprint to that stop sign, sprint to that finish line, and then you’ll be done,’ versus on some of these longer projects, it’s like ‘Sprint as fast as you can and we’ll tell you when you’re done.’ That can be quite the mindfuck, when you don’t know when you’re going to be able to relax and exhale.”

Hehir said the tight turnaround here was important for his team, too, as he and producer Jake Rogal both have significant life events ahead this month.

“We always knew this thing was going to launch, weather permitting, on September 15. They were going to get back to Earth, if everything went well, on September 18. And we were going to turn it around in about 10 days and have it all done. Our finish line was the end of September. And I am getting married in three weeks, and Jake, my main producer Jake Rogal, is having a baby the day I’m getting married. So we needed to be done, because we have other stuff going on as well.”

As for what’s ahead for Hehir, he said he has true crime and music projects ahead at the moment, but he’ll always be interested in returning to sports.

“If I’m lucky enough to get opportunities to do sports projects, that will always be something that I’m passionate about. I came from a sports family, my dream was to make sports movies, so I hope to never stop doing that. We do have several projects lined up; there’s a true-crime project I’m about to start, there are several music projects I’m about to start. The Last Dance was a gift in a lot of ways, not the least of which was it opened a lot of doors outside of sports. It gave me some opportunities I’d been hoping to get for a long time. So we’re hopefully going to embark on a lot of new and exciting stuff.”

The full Countdown: Inspiration4 Mission To Space is now available on Netflix.