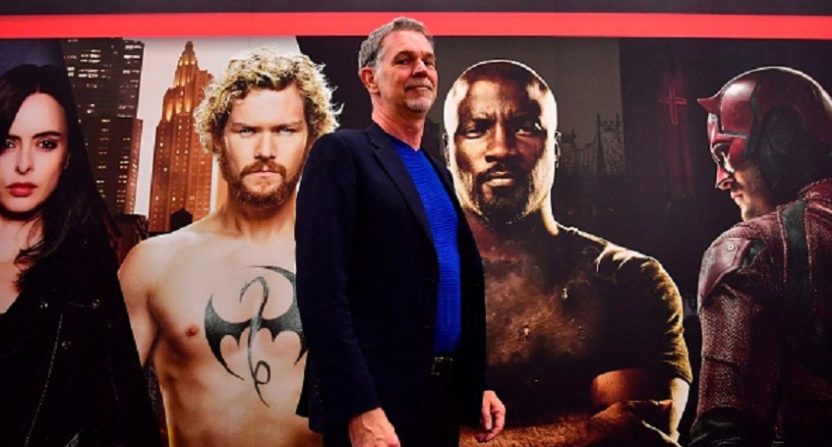 Streaming live sports has become a big deal for many technology companies, from Verizon to Amazon to Twitter to Facebook to YouTube. One company that’s consistently said they’re not interested in live sports is Netflix, though, with CEO Reed Hastings (seen above last March) saying last June that live sports wasn’t a fit for the company thanks to its lack of afterlife relative to other programming and that they wouldn’t bid for NFL rights because “we believe we can earn more viewing and satisfaction from spending that money on movies and TV shows.”

Since then, though, many analysts have projected that Netflix will eventually try to make a sports play, with some even citing the success of sports documentaries on the service like Icarus (which won the Oscar for Best Documentary earlier this month) as proof they should dive into sports further. But Hastings is holding firm, saying at Netflix Labs Day last week that the moves by Facebook and YouTube to explore live sports and news won’t tempt Netflix to follow:

As for live sports and current events broadcasting, an area of interest being explored by the likes of Facebook and YouTube, Hastings said:

“To follow a competitor? Never, never, never. We have so much we want to do in our area, so we’re not trying to copy others… There’s lots of things we don’t do. We don’t do news, we don’t do sports. But what we do do, we try to do really well.”

Despite all the talk from the outside about Netflix and sports, there are plenty of reasons it doesn’t make sense for the company. For one, there’s the lack of afterlife and long tail; much of Netflix’s strategy relies on picking up content that people will consume not just when it comes out, but also months and years later. Live sports in general don’t really deliver that. Beyond that, the sports model isn’t really bingeable in the way much other Netflix content is (once a game ends, you can’t just jump to another game featuring that team), part of the lessened opportunity to change the sports experience with a streaming platform (something Hastings talked about last year, saying “It’s hard to transform sports with the internet…the internet doesn’t yet add much value to the sports experience”). But even more importantly, there’s Netflix’s opposition to putting advertising breaks in their programming, something Hastings spoke about during the same event:

Hastings stressed his opposition to “chopping up” the site’s movies and TV shows to accommodate commercials.

“Having a great experience… vastly outweighs the fact that one company is gaining a lot of influence,” he said, alluding to Netflix’s market dominance, now under renewed threat from rivals Amazon Prime, Hulu and Disney (bolstered by its recent multi-billion dollar takeover of Fox).

Hastings is seemingly prepared to forego the lower prices and increased revenue advertising would bring and is putting his money where his mouth is, investing $8 billion in original programme-making in 2018 alone.

The advertising is perhaps the key here. Other streaming services can use ads during the broadcasts to offset the cost of live sports rights, and as with live sports on conventional TV, those ads have the advantage of being relatively “DVR-proof” and being more difficult to avoid than ads on non-sports content. But with Netflix going ad-free on all of its programming and relying on subscription fees instead, sports isn’t really an advantage for them. And the inability to recoup part of the sports rights costs from advertising makes those rights arguably less valuable to them than competitors like Facebook or Twitter that can do that. (To say nothing of the likes of Amazon, which can charge a subscription fee the way Netflix does, sell advertising on the streams, and then make even more money by selling sports-related products to those who watch the streams.)

So while Netflix is a behemoth in the entertainment space, and while they’re competing directly or indirectly with many tech companies that are diving into live sports, it’s understandable why live sports may not hold the same appeal for them. That doesn’t mean they’ll stay out of the sports world entirely; in fact, Icarus‘ success may well inspire them to take a further look at sports stories they can tell (and they may have further incentive to bolster their sports documentary lineup now that the 30 for 30 series has left for ESPN+). They’ve found some success in the space with the likes of Last Chance U and Team Foxcatcher, and they may well continue that. But Hastings keeps saying that they’re not going to pursue live sports, and there are good reasons to believe him.