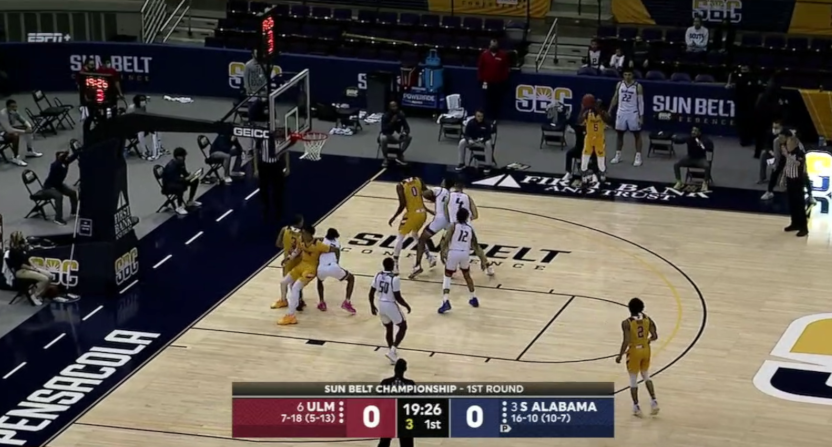 Sports sometimes feature great calls of spectacular highlights, and they sometimes feature great calls of spectacular bloopers. Friday night’s first round of the Sun Belt tournament saw the latter, with a game between the Louisiana-Monroe Warhawks and the South Alabama Jaguars featuring an absolutely terrible  shot (from three-point range, wide open, with the shooter double-clutching on getting it off) off the top of the backboard with a call that summed it up well. Here’s that shot, from Warhawks’ guard Marco Morency, which came with three seconds left on the shot clock:

The “Wow, what was that?!” really does come with an appropriate amount of disdain for how bad that shot was. And the subsequent just-the-facts play-by-play of “A shot to beat the buzzer, high off the backboard. That will be a shot-clock violation” was appropriate too. As per Daniel Ormsby’s Eye on Sky and Air Sports listings, the scheduled announcers for this game were Matt Stewart and Nate Ross, with the “What was that?” appearing to come from analyst Ross (cross-checking with his voice on previous highlights). His commentary here was gold. And this did see a whole lot of Twitter discussion as one of the worst shots ever:

IS THIS THE WORST SHOT OF ALL TIME OH NO pic.twitter.com/Ci5vuoeQzQ

This is the worst shot I have ever seen pic.twitter.com/3zdU3gX0Rl

me playing 2K for the first time in years without reading the instruction manual https://t.co/JDHF6j5qyJ

LMAO this the worst shot of all time I can’t believe it pic.twitter.com/HMY0GaVKiY

wait how did he do that with no one near him

That really is a good question. That’s going to be a highlight that will live in infamy for a while. At least it got a good call. And, for the record, ULM lost 80-72, so at least they won’t have to try to continue in this tournament while being roasted for that shot.