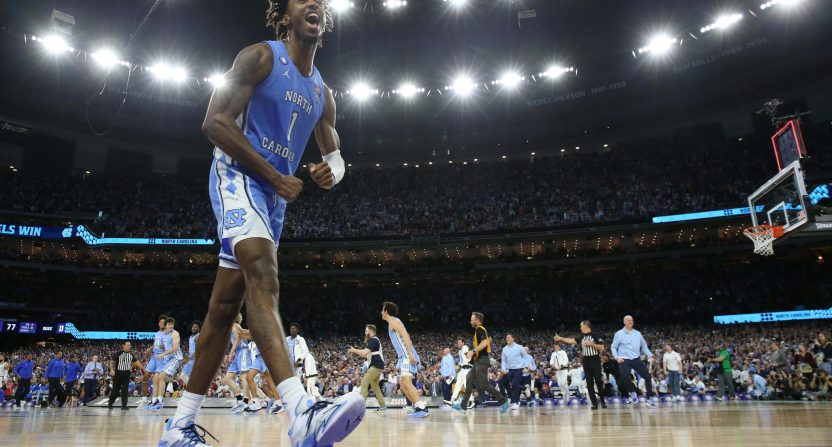 Ratings for the 2022 NCAA Tournament ahead of Monday’s National Championship Game between Kansas and North Carolina jumped 12 percent from 2021. The expected bonanza of a Duke-UNC semifinal and Coach K farewell delivered on the floor with an 81-77 thriller that had those in the Caesars Superdome buzzing with talk of greatest game ever.

Early returns from the television audience suggest the matchup met the hype, too.

The UNC/Duke game was the second most-viewed college basketball telecast in the history of cable television.

So how does college basketball capitalize on this success seven months from now when the 2022-23 season tips off?

Coaches have long been the stars of college basketball, dating back as least as far as to the UCLA dynasty under John Wooden. The retirements of Roy Williams and Mike Krzyzewski in consecutive years might create a power vacuum, but the potential influence such big names wield won’t necessarily diminish.

On the contrary, Kansas coach Bill Self — one of the men best-positioned to replace Coach K as the sport’s most prominent figure — sees both as integral to improving college basketball’s future.

“The best way to help college basketball is to get ideas and have people involved that understand college basketball,” Self said. “A lot of times, it can’t be from within the profession. So you have a couple of recently retired guys that have been as good at this as anybody that’s ever done it. I could see them playing a big role in us moving forward in a positive way.”

Regardless of whether Williams or Krzyzewski takes some kind of role molding the game behind the scenes, each left a massive void in basketball’s spotlight.

It’s a void that players, not coaches, can and should fill.

Coaches are the architects of programs and their success and the figures fans instantly associate with their teams. I attended college in Tucson, a city that probably would have made the late Lute Olson king if it didn’t deter from his guidance of the Arizona basketball program.

However, players are ultimately who attract audiences.

A problem college basketball has during its regular season is that typically, the players attracting the attention from a media perspective are those blue-chip freshmen who arrive on campus as surefire draft prospects, only sticking around long enough to fulfill their NBA-mandated age requirements.

The negative impact on the college TV product is twofold. First, these players don’t stay long enough to attract viewers for any reason beyond their draft potential. They might be the biggest names at the college level, but they aren’t necessarily the best players yet, so viewers are encouraged to tune in more for what could be than what is.

National championships in recent years have been dominated by veteran rosters, highlighting something of a basketball paradox. The best talent rarely lasts until they’re upperclassmen, but the most successful teams are heavy with upperclassmen and thus lacking in premier talent.

College hoops arguably peaked as a television product in the 1980s thanks to standout players who made their names over the decade before revolutionizing the pros — players like Jordan and Ewing; Hakeem Olajuwon, who reached three Final Fours at Houston; David Robinson, whose 1986 and 1987 NCAA Tournament performances with Navy are the stuff of legend; Mookie Blaylock, the driving engine of Oklahoma’s uptempo offense.

Top teams flourished with top talent, which made for a more exciting brand of basketball.

The second negative element is high roster turnover, which lends itself to sloppy play. Cohesive basketball’s beauty is evident in the experienced Kansas and North Carolina teams that meet for the 2022 national championship.

“One of the keys to college basketball is going to be how to get old and how to stay old,” Self said. “We’ve been fortunate that we’ve been able to do that the last couple of years.”

Some of the players in the title game who have had some time to develop and build chemistry, like Ochai Agbaji and Caleb Love, have grown into stars. College basketball having more talents like them who remain in school only benefits the game collectively.

But giving them reason to remain is critical.

The extension of the NBA draft withdrawal deadline has made some noteworthy, positive impacts on improving the quality of college basketball. The most prominent example may be former Oklahoma standout Buddy Hield, who — after testing the waters in 2015 — returned to Norman for a phenomenal senior season.

Hield starred that 2015-16 campaign in a Big 12 shootout with Kansas that was both entertaining and a ratings winner for ESPN.

Incentivizing standout prospects to stay in the college game longer must be a priority, which means offering more slices from the billion-dollar pie that comes primarily from TV rights.

The new rules on name-image-likeness implemented last summer address the financial motivations that might send a player who is on the fence about returning to college off to the NBA.

Armando Bacot, who shined in North Carolina’s semifinal win over Duke, is a testament to NIL’s impact. He gained sponsorship from Jimmy’s Seafood last summer.

Should he opt to return to Chapel Hill for his senior season after a Final Four performance that made him an instant Tar Heels legend — he grabbed 21 rebounds against Duke and returned to the floor after a nasty fall, a modern-day version of Willis Reed’s famous 1970 NBA Finals Game 7 — Bacot will likely have plenty more sponsorship opportunities.

It’s a symbiotic relationship for the athlete and the athletic department, as Bacot described.

“NIL’s been great, being able to go to a school like North Carolina with such a big brand definitely has a lot of advantages to it,” he said. “It’s been really cool to experience that and be able to make money.”

An Associated Press report from this year’s Final Four has athletes on major-conference teams making an average of $100,000 in the near future.

And so far, payment for the entertainment they provide and uptick in applications to the universities has not been the bogeyman threatening the student-athlete ideal critics feared. Bacot’s an example.

He noted that he had to keep his celebration of the win over Duke short to complete a project for his ESS 323 course.

In addition to changing with the times off the court to keep top players, college basketball must embrace a more modern game on the court as well.

In the 1970s, the NBA brand of basketball was methodical and physical to the point of being sluggish. College hoops, meanwhile, innovated. High-flyers dazzled, players like David Thompson, who won a title in 1974 at NC State. Superb shooters like Notre Dame’s Adrian Dantley got buckets en masse, and New York streetball legend James “Fly” Williams became the proto-Cinderella star for Austin Peay in the vein of Fennis Dembo or Steph Curry.

It’s not a coincidence that the NBA’s popularity skyrocketed once it adopted a similar style, thanks in large part to established college stars like Larry Bird, Magic Johnson and Michael Jordan bringing that fresh approach to the pros.

But the NBA’s rising profile at the end of the ‘80s didn’t come at the expense of college basketball. The amateur game continued to innovate with coaches like UNLV’s Jerry Tarkanian and Arkansas’ Nolan Richardson turning aggressive defense into high-scoring offense, while Arizona’s Olson and others embraced the introduction of the 3-point line in 1986.

The style of both college basketball and the NBA began to slow at the turn of the millennium. But while the NBA made changes to return to an offensive-oriented game that’s more palatable for the viewing audience — and, frankly, more cool — college has been slow to follow suit.

This NCAA Tournament and Final Four suggests that could be changing.

Of the quartet to play in New Orleans, three ranked No. 28 or better nationally in scoring offense: North Carolina at 78.1 points per game; Kansas at 78.4; and Duke at 80.1. Of the top eight seeds in the Tournament, six ranked in the top 25 of scoring offense nationally.

Philosophies shifting to something more closely resembling the modern pro game may become the trend — and a new generation of coaches with NBA experience like North Carolina’s Hubert Davis will be at the forefront.

“The most difficult scout [-ing report] to prepare [is] for a team that had a big guy that had the ability to stretch the floor off of ball screens or in transition,” Davis said. “And so instead of me stressing going through the scout about how do we defend this guy, how do we play ball screens, how do we match up with them, do we put a small, do we put a big — it would be great if we had one of those guys.

“Then just talking about where basketball is today,” he added. “For me, from an offensive standpoint, it’s fun when you have spacing and balance and a combination of ball and player movement.”