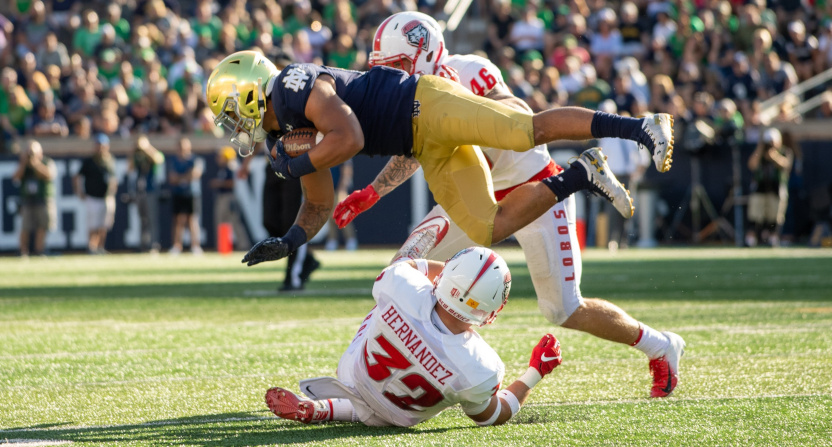 The Week 3 college football schedule didn’t have a ton of extremely compelling matchups, with zero clashes between teams in the AP Top 25 and only three top 25 teams losing (#18 Michigan State at home against Arizona State, #21 Maryland on the road against Temple, and #24 USC in overtime on the road against BYU). Moreover, eight of the nine top 10 teams in action (#10 Michigan had a bye) won by 24 points or more, with the only exception being #9 Florida (which recorded a 27-21 road win over Kentucky despite losing starting quarterback Feleipe Franks). And all of that didn’t make for good ratings. Paulsen has a breakdown of what happened at Sports Media Watch, and the key takeaways are that while Fox saw some good numbers, just about everyone else saw year-over-year losses.

Let’s start with Fox, which pulled in a 2.5 overnight for #6 Ohio State’s 51-10 road win against Indiana, Fox’s featured “Big Noon Saturday” game. That marked the highest rating in that noon ET window (and the third out of three weeks so far where Fox has won noon), although #13 Penn State’s 17-10 home win over Pitt on ABC was close behind with a 2.4.

Update: While Fox won in overnights, ABC pulled ahead in final viewership with an average of 3,196,000 viewers to Fox’s 3,048,000. Still, there wasn’t a comparable game on Fox in that slot last year, and they won the 18-49 demographic (1,025,000 to 980,000), so they can still be happy with that one. Ohio State-Indiana also served as a good lead-in for the Arizona State-Michigan State game, which was up 163 percent from what Fox aired in the mid-afternoon window last year.

The ratings news just about everywhere else wasn’t great. The Alabama-South Carolina game on CBS pulled in a 3.1 overnight, the highest rating of the weekend, but that was a 16 percent drop from the 3.7 they got for LSU-Auburn in Week 3 last year. (Understandable, as that was #12 vs. #7 and wound up being a one-point LSU win; this was #2 vs. unranked, and Alabama won by 24.) It was even with Tennessee-Florida in this slot in 2017, though, which was a matchup of #22 and #25. And while this was the best number for the first SEC on CBS game of the season since 2014, Paulsen notes that that franchise opened in Week 1 or Week 2 for the last four years, weeks where they didn’t have the top SEC game.

The real rough rating came for NBC’s coverage of #7 Notre Dame’s 66-14 home win over New Mexico, which pulled in just a 1.1. That’s the lowest for a Notre Dame home opener since at least 1997, and below the previous low of 1.2 they recorded for a home opener against Temple in 2017. That game kicked off at 2:30 p.m. Eastern, so it faced competition from the end of the noon games and then the 3:30 p.m. starts, which included Alabama-South Carolina, Stanford-UCF and USC-BYU.

Speaking of USC-BYU, that pulled in a 2.2 and provided a year-over-year boost for ABC, but their Penn State-Pitt game before that fell eight percent (even if it eventually won noon in viewership) and their primetime coverage of #1 Clemson’s 41-6 win over Syracuse drew a 2.6 (a drop of 47 percent from 2018’s Ohio State-TCU game). And at ESPN, the evening Florida-Kentucky game drew a 2.0. That was down nine percent from Alabama-Ole Miss last year. However, ESPN was happy to point out that it was the best number on cable, and one of their network’s best ratings so far this year:

None of these numbers are necessarily all that bad, especially considering that the slate of games didn’t look great to begin with and that there weren’t a ton of upsets. But the year-over-year declines are notable, and they illustrate that this Week 3 was rougher for the networks than the same week in 2018.