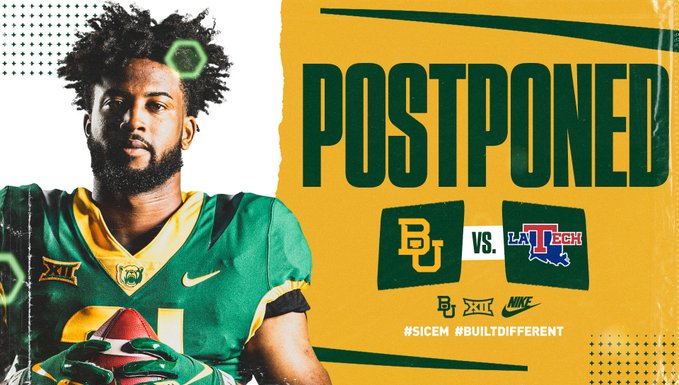 The college football schedule has changed dramatically over the past few months, with some conferences opting to still play out-of-conference games, some going conference-only, and some opting not to play at all this fall (at least not for the moment). But even after the schedule looked a little more locked in, there have still been big changes, with the past few days seeing four different Week 2 games postponed or cancelled. SMU-TCU (originally set for Friday) was officially postponed (and likely cancelled for 2020) last Friday, while Tulsa-Oklahoma State (originally set for Saturday) was officially moved back a week Monday, and Louisiana Tech-Baylor (which was set to be Fox’s featured Big Noon Kickoff game Saturday, and their season debut of that now-two-hour preview show) was officially postponed Tuesday. Yahoo’s Pete Thamel broke that news, and the schools later confirmed it:

Source: Louisiana Tech and Baylor are postponing their game scheduled for Saturday. Louisiana Tech had an outbreak of positive COVID tests in the wake of Hurricane Laura, as 38 players tested positive. Prior to Laura, they’d had just one positive over three weeks amid 350 tests.

That’s three games involving Big 12 teams (TCU, Oklahoma State, and Baylor) that have gone down in the past few days, with both SMU-TCU and Baylor-LA Tech originally set for Fox’s networks (FS1 and Fox respectively) and Tulsa-Oklahoma State set for ESPN’s networks. There also have been a few further Week 2 games postponed or cancelled in the past few weeks, including UCF-FIU (postponed August 13) and Marshall-East Carolina (postponed August 14, marking the third date change for that game). So the 2020 college football schedule continues to undergo significant change, as this tweet from Athlon Sports’ Bryan Fischer illustrates:

The evolution of the Week 1 schedule in the Big 12: pic.twitter.com/MitE2KVGC3

We’ll see if there are further changes ahead, and we’ll see what Fox decides to do with that suddenly-vacant noon Eastern slot on their broadcast network.

Update: Fox’s Bruce Feldman tweeted that their featured game in the noon slot will now be Arkansas State-Kansas State. It was originally scheduled for 3:30 p.m. Eastern on FS1:

#KState's season opener this Saturday against #ArkansasState will be moved to a noon ET kick and will be televised nationally on FOX. (Since the LaTech-Baylor game in that time slot has been postponed due to the COVID outbreak at LaTech.)

That’s also notable in the Big Noon Kickoff implications, as that pregame show has often focused on spotlighting the network’s noon matchup. Now, they’ll be spotlighting a much different matchup than they’d initially planned.

Beyond the Big Noon Kickoff change, this is definitely a pretty reduced schedule of games with Big 12 teams for Fox and ESPN. And it’s worth keeping in mind that Missouri State-Oklahoma, one of the more notable remaining games, will be a $55 pay-per-view. And with the Big 12 being one of just two Power Five conferences playing at the moment (the ACC is also playing this week, while the SEC plans to start September 26, and the Pac-12 and Big Ten currently don’t plan to play this fall, although that could change in the latter case), the CFB matchups will continue to be pretty limited this Saturday.