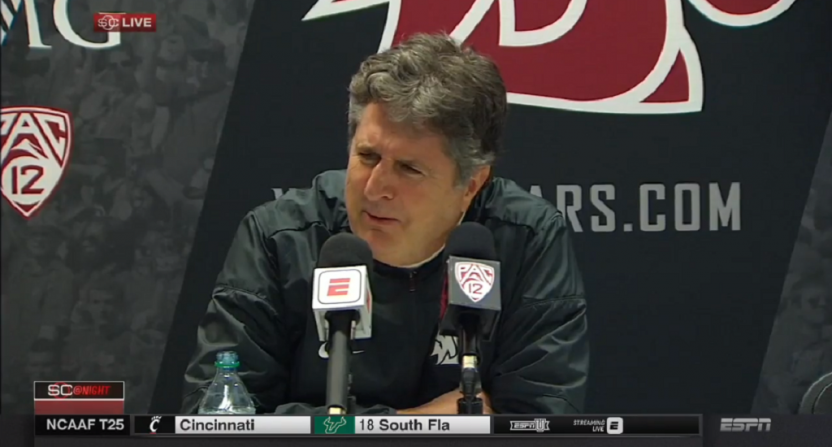 Washington State Cougars’ football coach Mike Leach has always been known for some quirky perspectives, from his love of pirates to his thoughts on everything from Australia to Daniel Boone, but he maybe took that to a new level Sunday. On Sunday evening, Leach tweeted out a video purporting to show former U.S. president Barack Obama advocating for a new world order, along with a caption asking for comment:

Listen to this. Text your thoughts. There is a lot of disagreement on government, so I think that an open discussion is always in order. Tweet your thoughts. Maybe we can all learn something. https://t.co/7IwZ0kxuw8

The problem is that this isn’t actually an accurate video. As Jason Kirk notes at SB Nation, the speech in question involves Obama speaking in Belgium (and not to the conspiracy-theory-magnet Bilderberg Group, as the video claims), and it’s heavily edited from the actual video and transcript to make Obama look bad. Here’s Kirk’s relaying of the actual speech, with the parts emphasized in the video seen in bold:

Your Majesties, Mr. Prime Minister, and the people of Belgium — on behalf of the American people, we are grateful for your friendship. We stand together as inseparable allies, and I thank you for your wonderful hospitality. I have to admit it is easy to love a country famous for chocolate and beer.

Leaders and dignitaries of the European Union; representatives of our NATO Alliance; distinguished guests: We meet here at a moment of testing for Europe and the United States, and for the international order that we have worked for generations to build.

It was here in Europe, through centuries of struggle — through war and Enlightenment, repression and revolution — that a particular set of ideals began to emerge: The belief that through conscience and free will, each of us has the right to live as we choose. The belief that power is derived from the consent of the governed, and that laws and institutions should be established to protect that understanding. And those ideas eventually inspired a band of colonialists across an ocean, and they wrote them into the founding documents that still guide America today, including the simple truth that all men — and women — are created equal.

But those ideals have also been tested — here in Europe and around the world. Those ideals have often been threatened by an older, more traditional view of power. This alternative vision argues that ordinary men and women are too small-minded to govern their own affairs, that order and progress can only come when individuals surrender their rights to an all-powerful sovereign.

So yeah, that video is not relaying a true speech or its intended meaning, and it’s not a great thing for a college football coach to tweet. But beyond that, Leach tweeted that he wants an open discussion, but then shot down everyone who tried to tell him the video was fake:

Your thoughts are what? I didn’t say anything

I didn’t attack anyone. I asked what people’s thoughts on the statements and ideas were. This is not very confusing. Say your piece. I’m posting a quote. Prove your point

So, your thoughts on the statements are what? Agree or disagree? How do you see it differently?

Prove it. I just retweeted it.

You know this why. You are special to this site, because finally you’re going to unlock this whole mystery. Oh, btw, I forgot to ask, what are your thoughts?

Please expand. I think we are getting somewhere. There is only a media bias against Obama and no one else. I feel safer already

This is certainly unusual behavior for a college football coach, and it raises a bunch of questions. And it’s not great timing, with the Cougars coming off a 9-4 campaign and a third-straight winning season; they’re looking to prove they’re a consistent threat in the Pac-12, not have their coach answering questions about a conspiracy theory video. At least Leach isn’t claiming the earth is flat, though. We’ll see where this goes from here.