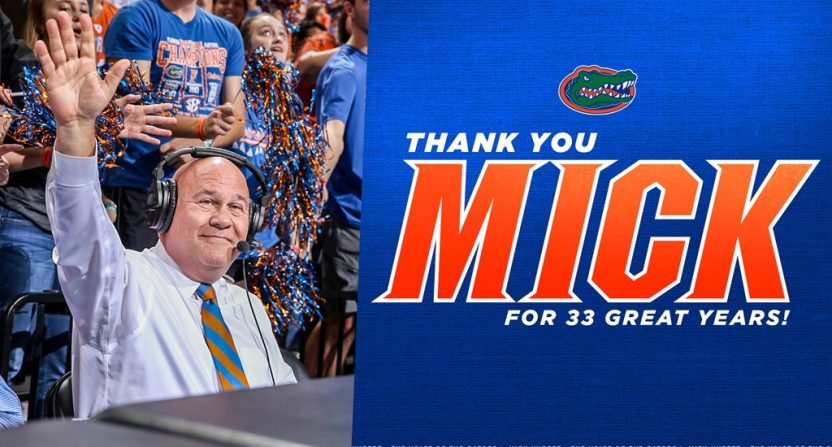 After more than three decades as the voice of the Florida Gators, Mick Hubert will step away from the microphone.

Hubert will hang it up after a Florida baseball series, ending a run of 33 years and thousands of games across multiple sports, especially football, men’s basketball, and baseball.

Obviously Hubert’s run at Florida coincided with some fantastic years for all three of those programs, with three national titles in football, two in men’s basketball, and one in baseball .

Via the University of Florida:

“That’s going to be it,” Hubert said. “This wasn’t the end of a five-year plan. I don’t know if I can explain how I knew, but I knew. I had been considering this for a little while. I just had to do some praying about it and enjoy every game.”

“Five years ago, I’d probably told you I was going to do it until I was at least 80,” Hubert said. “That was five years ago. A couple of years ago, I started changing. I had a change of heart. Only God can change a person’s heart. I’m just being obedient right now.”

Hubert said he can’t identify a specific moment when he decided to step away from behind the mic that defined his professional career. He said it’s more of a feeling that now is the right time, a place he reached through his strong faith and discussions with his wife and their pastor. Judi retired after 32 years as a kindergarten teacher at Oak Hall in May 2021.

Congratulations to Hubert on a hell of a run in one place. Those jobs are rare in broadcasting (or in any industry now, really), and Hubert was the voice for a lot of Florida fans during some incredible high points across multiple programs.

[University of Florida/image via UF]