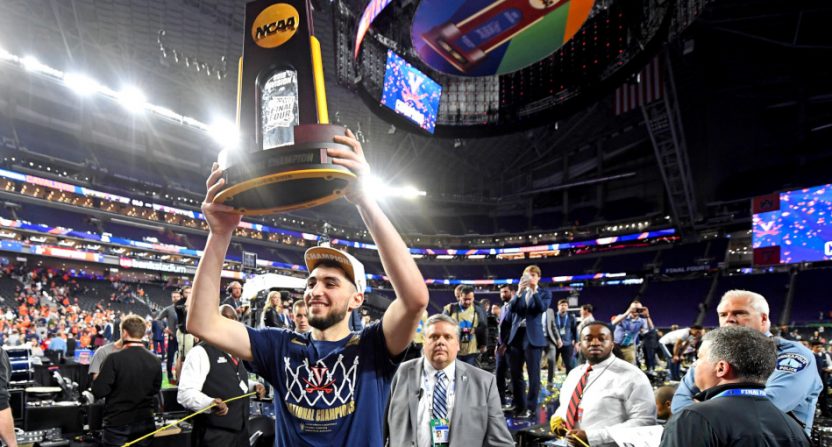 The Virginia Cavaliers picked up the NCAA men’s basketball national championship Monday night with an 85-77 overtime win against the Texas Tech Red Raiders, and that win wound up proving a lot of very confident sports pundits wrong. This tournament came a year after Virginia became the first-ever #1 seed to lose to a #16 seed (the UMBC Golden Retrievers), and that loss in particular sparked a lot of hot takes on coach Tony Bennett, his defensive system, and the Cavaliers’ program as a whole. And the takes didn’t stop there, rolling on into this tournament, during this tournament, and even just ahead of this title game.

Let’s look at some of them, from oldest to newest:

The loss that ended Virginia’s season at 31-3 leaves one question that must be addressed.

Is Bennett an expert at building teams for the long haul of the ACC season, but less so in preparing a team for the short haul of the highly pressurized NCAA tournament?

With each piece of additional evidence, it’s difficult to draw any other conclusion.

Now, the Cavaliers are in the record book for the wrong reason. They’re being bashed by columnists and talk-show hosts who insist they’re better built for the four-month grind of a regular season than the do-or-die, single-elimination NCAA tournament. And given Bennett’s recent track record (143 wins over the past five seasons, but no Final Fours), it’s hard to argue.

That loss also led to a Change.org petition to fire Bennett, which only had 11 signatures as of Tuesday. But there were also pieces from The Ringer to Deadspin to FanSided pointing out that Virginia’s focus on defense and a slow tempo made them perhaps more susceptible to upsets than the average team, with all wondering to some degree about the merits of Bennett’s system. And while it’s probably true that a slow-paced system can increase the potential for upsets if your shots don’t fall and if you’re matched up against a hot three-point shooting team like UMBC, that doesn’t invalidate the overall system.

But given last year’s failure, a lot of people were very skeptical of Virginia heading into this year’s tournament. And even long before this tournament. Let’s go to our next clip:

“Ugh. He’ll never win a championship with this team, though. They can’t play offense. Here’s the bottom line. There’s going to come a game in the tournament where they need to make a shot and get a shot and they can’t get it. I think they’re very defendable. I don’t like them, I don’t like them offensively at all.”

Moving on to this year’s NCAA tournament itself, let’s consult ESPN’s Stephen A. Smith on what he thought of the Cavaliers Monday before the title game:

April 8, 2019: Stephen A. Smith, ESPN: “College basketball is taking a major hit without Zion in the title game”:

Smith says “I just didn’t want to see Virginia, and I don’t want to see Texas Tech for the same reason. These two teams are elite defensively, they know how to shut teams down. …When I look at Texas Tech play defense the way they did against Michigan State, I just think they’re going to do the same to Virginia tonight. Unfortunately, I expect a very ugly, low-scoring game that’s going to be in the 50s, maybe barely. I could see Texas Tech winning this somewhere along the lines of 55-51 to win the national title.”

Smith continued with the stylistic criticisms later on his radio show:

The 85-77 score wound up being the highest-scoring title game since 2000, and tied for the 11th-highest-scoring title game of all time. And even the pre-overtime score of 68-68 wasn’t far from the norm, beating the 2015, 2014, 2012, 2011 and 2010 title games, for example. Oh, and these kinds of criticisms aren’t a new thing for Smith. Last year, before the NCAA Tournament even began, his long-running criticisms of Virginia were summed up in a Charlottesville Daily Progress article:

Virginia has been called boring by some, including Stephen A. Smith, who said he hopes the Cavaliers lose in the first round of the tournament so that they “won’t ruin games” for the rest of the tournament. Well, maybe Smith should go watch the Knicks and tell us how much fun he’s having.

Smith also got delightfully called out by the Cavaliers’ Ty Jerome (seen above with the trophy) Tuesday after their championship win.

Smith’s far from the only one who’s criticized Virginia, as the other clips here show. But he’s one of the most prominent, and it’s very funny to see him getting trolled by Cavaliers’ players. We can file his takes on this with his amazingly-bad NBA Finals predictions, his thoughts on Hunter Henry versus Derrick Johnson, and  “European players can come to the NBA at 17.“