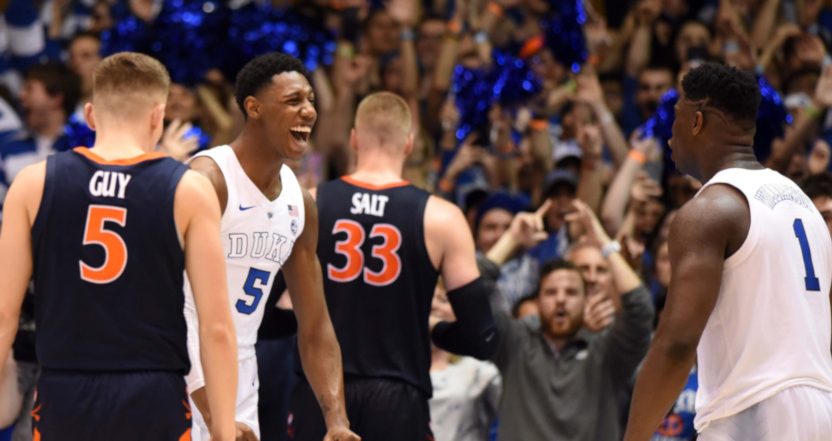 Duke’s 72-70 win over Virginia Saturday evening drew some remarkable ratings. As per an ESPN release, the 3,764,000 viewers that broadcast averaged was not only the top college basketball game on that network this season, but the top game on any network this season.

Here’s more on that and how it fits into the wider context of ESPN college basketball ratings:

Saturday’s top-5 matchup between then-No. 4 Virginia and No. 1 Duke delivered a Nielsen reported audience of 3,764,000 viewers, making it the most-watched college basketball game across all networks this season. The audience peaked at 4,980,000 viewers in the telecast’s final minutes of the game.

Season-to-date, men’s college basketball on ESPN and ESPN2 is up eight percent. ESPN networks have aired the 44 most-viewed games on cable, including seven of the top 10 across all networks.

Those are pretty impressive numbers. And the strong ratings for Virginia-Duke (especially at the end) may have also helped to bolster ESPN’s first UFC Fight Night on ESPN+ prelims, which aired immediately afterwards (8:15 – 10 p.m. Eastern) and averaged a 1.4 rating, the best Fight Night prelims rating on cable since at least 2013 (not entirely surprising given ESPN’s larger distribution and viewership relative to FS1).

Here’s more on how it did in terms of viewership:

There is a little adjustment upward in the UFC on ESPN prelim ratings: Average was 2.08 million, with peak of 2.3 million. Was 3rd in total 18-34 viewers behind Duke-UVa and Lakers-Rockets. Median age 42, 4 years younger than ESPN average

Having a high-rated basketball game lead into that probably helped, even if some MMA fans were annoyed about it pushing the televised prelims back (there were previous preliminary fights on ESPN+). And it’s also notable that ESPN saw other strong college basketball ratings Saturday, with Kentucky-Auburn averaging 1,878,000 viewers and Wisconsin’s win over then-undefeated Michigan averaging 1,650,000, both top-10 ESPN CBB broadcasts this year. A good lineup of live sports rights continues to be a pretty strong recipe for networks.