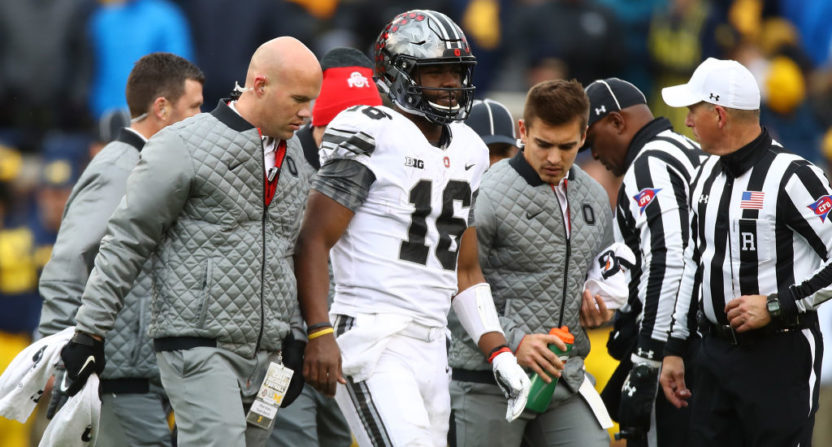 Although Ohio State survived at Michigan on Saturday to remain alive in the College Football Playoff hunt, it did so without starting quarterback J.T. Barrett. Barrett was abruptly announced out with a knee injury, and after in postgame press conferences he and coach Urban Meyer revealed the injury actually occurred when a cameraman collided with Barrett before the Buckeyes’ offense took the field and twisted the quarterback’s knee.

In a video obtained by TMZ, a fan at Michigan Stadium captured Barrett limping on the sideline after the alleged collision. The video does not capture the actual incident, but you can hear the fan who took the video exclaiming, “The cameraman just ran into J.T.’s leg.”

The witness who sent the video also gave TMZ a description of the cameraman in question:

The witness also says the perpetrator had already run away from the collision site by the time he got his phone back up and running … but ID’d the photog as a white guy in gray and yellow gear who was carrying a “medium-sized camera.”

Barrett supposedly wasn’t the only player who had issues with folks on the sideline during Saturday’s game. Running back Mike Weber claimed he got dinged up by a cameraman as well.

Apparently Mike Weber was also dinged up by a camera guy on Saturday in Ann Arbor. Was told this happened during the game.

Michigan’s sideline situation is without question the tightest/most uncomfortable of any B1G stadiums I’ve worked in. pic.twitter.com/mZoZRvS8FH

Fortunately, Barrett’s injury does not appear to be too serious. He’s probable for the Big Ten Championship Game against Wisconsin next week.