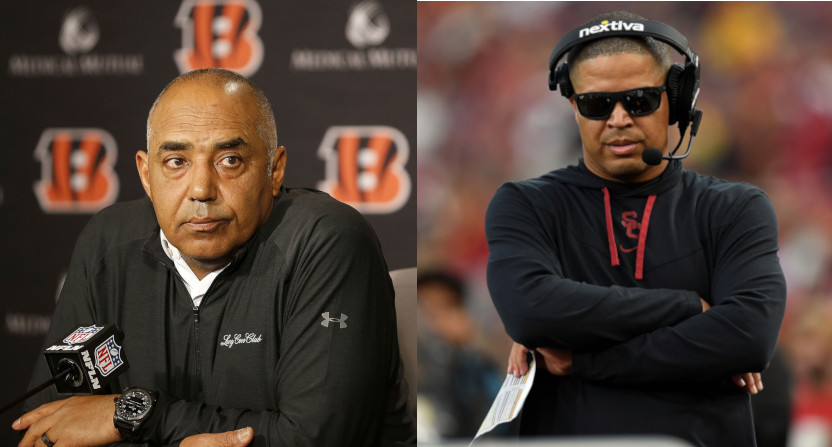 There’s a long history of Wikipedia vandalism around sports events, but the latest thing here seems particularly unusual for not having any real connection to either news or obvious jokes. That would be an edit to the USC Trojans Football page, which listed former Cincinnati Bengals head coach Marvin Lewis (seen at left above in his final Bengals’ press conference in 2019) as USC’s interim coach for most of the day Tuesday. (The actual interim coach is Donte Williams, seen at right above, who took that role on Sept. 13 after Clay Helton was fired. And he has a current record of 3-3, unlike the 2-1 listed on his page or the 2-1 listed for Lewis on USC’s page.) Here’s a screenshot of that page from 5:30 p.m. Eastern Tuesday, more than three hours after the change was made from Williams to Lewis (see further discussion of that below; you can also click to embiggen the screenshot):

Lewis is currently a special advisor to the head coach (Herm Edwards) at Arizona State. And while he made some slight news Monday (he and fellow former NFL head coach Jeff Fisher were named as head coaches for the 2022 NFLPA Collegiate Bowl), it’s quite unclear why anyone would want to list him as the current head coach at USC. He didn’t play for USC (he played at Idaho State), and while he coached in college from 1981-91 at Idaho State, Long Beach State, New Mexico, and Pittsburgh, he never coached at USC. And he hasn’t really been flying around the coaching search rumors lately, especially not at the college level. But, as per Wikipedia’s handy edit history function, an anonymous user made that edit at 2:19 p.m. Coordinated Universal Time (UTC, GMT-0, the time zone Wikipedia uses; that translates to 10:19 a.m. Eastern), and unilaterally put Lewis into the interim HC role at USC.

What’s also great about Wikipedia is that they provide the IP address even for those who edit without logging in, and you can see other contributions from that address. In this particular case, this is the only article that person has touched (as a not-logged-in user from that specific IP address; IP addresses can change, and people can use different IPs addresses).  And WhoIs and WhatIsMyIPAddress searches both put that IP address in southeastern Virginia (one says Portsmouth, one says Norfolk). IP geosearching is often not precise, as those results indicate, but it does at least give an idea of what region someone’s coming from. It’s not clear why someone in Virginia felt the need to swap in Lewis for Williams on the USC Football page, but they apparently did.

Interestingly enough, a much more regular Wikipedia editor also touched this page later Tuesday. But they didn’t change the Lewis part of the page, possibly because they didn’t notice it. That editor is Pvmoutside, who does a lot of work shifting “future opponents” to current on CFB team pages, and that’s all their edit here (at 5:10 p.m. ET) did.

Of course, this isn’t the most significant thing in the world. As noted above, Wikipedia vandalism happens, and usually doesn’t last too long before someone corrects it. And this isn’t a particularly impactful Wikipedia change; no one’s going to think that Lewis is USC’s head coach because of this, unless they legitimately don’t know who’s in that role and don’t do any further research. By comparison to some of the actual giant problems that have shown up on Wikipedia over the years, such as Joe Streater being falsely attached to the Boston College point-shaving scandal and numerous news organizations then citing that as fact, this is small potatoes.

But much like some of the fun that can come from tracking Wikipedia edits from government accounts (see some US, UK, and Canadian examples), it’s interesting to see what people care about changing on the site. And it’s fascinating that someone in Virginia took the time to go to the USC Football page and name Lewis as their interim coach, and did so apparently without any particular news about either USC football (other than former coach Clay Helton getting the Georgia Southern job) or Lewis (other than the news of his Collegiate Bowl gig from Monday).

As of 5:50 p.m. Eastern, Lewis was still listed as the USC interim coach on that page. We’ll update this post when someone corrects USC’s interim coach from Lewis back to Williams.

Update: This was finally fixed at 3:04 a.m. UTC Wednesday, or 11:04 p.m. Eastern Tuesday night, by another anonymous user who appears to be in Guam. Our hats go off to them.