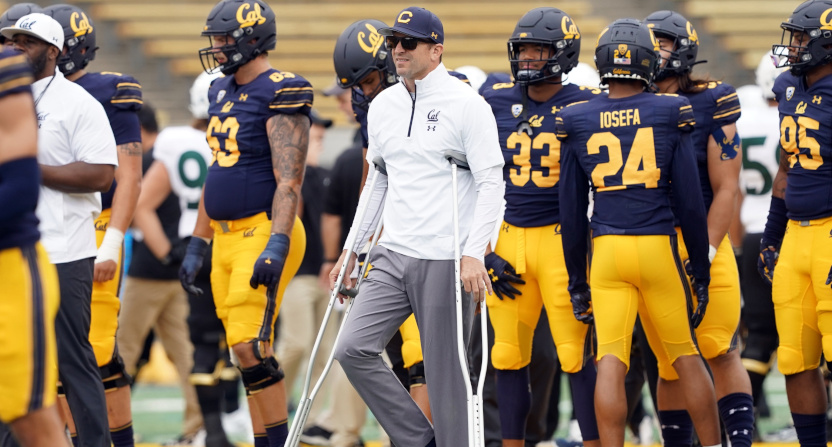 The 2020 college football season, played in a pre-vaccine era, saw a ton of postponements and cancellations over positive COVID-19 tests, as did many other sports in 2020 and some in 2021. But the 2021 CFB season had been free of postponements or cancellations at the FBS level until this week. That streak ended Tuesday, though, with the news (first reported by Jon Wilner of The (San Jose) Mercury News and later confirmed by Cal athletics) that the California Golden Bears’ home game against the USC Trojans this coming Saturday (which was set for FS1 at 2:30 p.m. ET) was officially postponed:

Game Update for Cal Football vs USC this Saturday.

Update: Brett McMurphy of The Action Network later reported the game has been rescheduled to Dec. 4:

USC at Cal has been rescheduled for Dec. 4

A big part of what’s going on here is that the COVID-19 policies and procedures at Cal, and in the city of Berkeley, remain much more stringent than almost anywhere else in the U.S., and they seem to be much tougher than anywhere else with a major sports team. This led to the Golden Bears (head coach Justin Wilcox and members of the team are seen above during a Sept. 18 game against Sacramento State) only having an estimated 42 scholarship players last week in a 10-3 road loss to Arizona, which gave the Wildcats an edge in ending a FBS-high 20-game winless streak. And that’s an important part of why so many Cal players have been lighting the school up on Twitter over this. Here’s some of that, from DE Luc Bequette and QB Chase Garbers:

UHS told us we could be arrested for refusing to test as vaccinated individuals with no symptoms. If I understand correctly, I can go to San Francisco, steal a bunch of items in a Walgreens, and not be arrested. However, if I refuse a test in Berkeley, I can be… https://t.co/dfCiELikMi

And this illustrates part of the issue with current COVID-19 protocols in college sports in particular, where so much is left to the individual universities, and where the universities are highly affected by their local municipal governments’ decisions. Other sports are still somewhat seeing issues with different rules between jurisdictions, including issues for Canadian teams (which led to some teams trading away unvaccinated players, and to several Canadian teams playing at least part of their 2020 and 2021 seasons in the U.S.) and issues for unvaccinated players in vaccination-required cities like San Francisco and New York. But seeing where a team plays make a big difference for it in terms of testing protocols is unusual at this point.

It’s definitely notable that this has now been rescheduled. If it hadn’t been, that might have affected USC more than Cal. The Golden Bears are 3-6 overall, and their bowl chances are slim to none. But the Trojans are 4-5, and they can still make it to bowl eligibility at 6-6; however, their other remaining games (hosting UCLA and hosting BYU) seem tougher than their date with the Golden Bears. So there was a strong incentive for them to find a way to make this up.