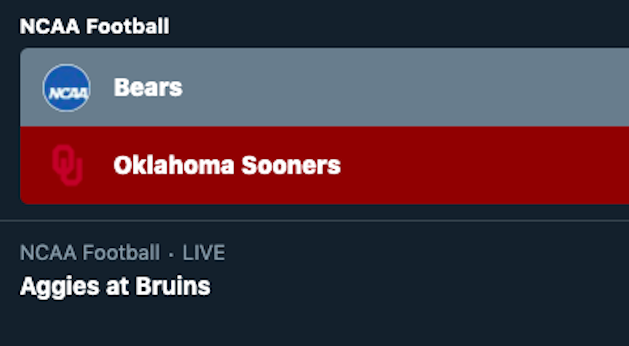 For once, “fake news” was the appropriate thing to say for any college football fan who logged onto Twitter on Saturday morning.

If you didn’t know any better, you’d have been shocked and surprised to realize that major college football was starting up again today. You might have even had a moment where you’d convinced yourself if was true. There have been so many changes and cancellations, revisions and retractions, and rumors and runarounds, that it was entirely possible that it hadn’t occurred to you that the Oklahoma Sooners were kicking off the college football season against the Missouri State Bears (or, the “NCAA Bears,” at least) while the UCLA Bruins were ready to throw down with the New Mexico State Aggies, amongst many other games.

Thanks for the kick to the gut, Twitter pic.twitter.com/JQRFQTZ4FR

(But wait, didn’t the Pac-12 cancel its season? GUESS NOT BECAUSE TWITTER TOLD ME IT’S HAPPENING RIGHT NOW!)

(Hold on…UCLA decided to play at 9:00 a.m. local time? STOP TRYING TO DENY IT, COLLEGE FOOTBALL IS BACK!!!)

But alas, turns out that you can’t trust giant, faceless social media platforms run on algorithms after all. Despite what Twitter’s trending topics would have had you believe, there is no FBS college football happening today. Yes, college football is back, but the only game on the docket is Austin Peay vs. Central Arkansas and that’s not happening until 9:00 p.m. this evening. 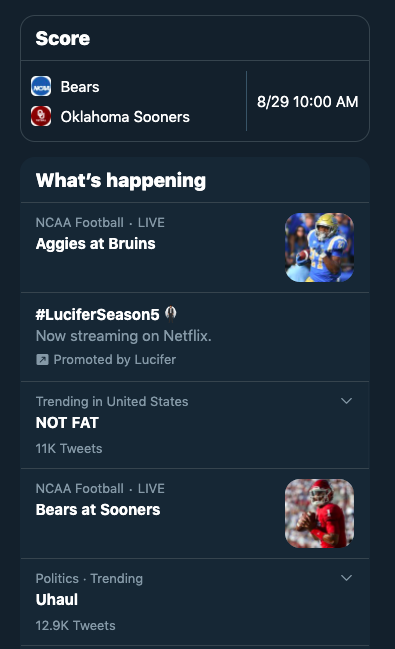 If you look at the 2020 college football schedule as it would have stood, all of those games would have been played today if not for the deadly pandemic that swept the nation and world and caused mass cancallations of all major sports and just about every other major event where large groups of people could gather.

So there was a time when all of these game would indeed be happening today. So when these games got cancelled, someone over at Twitter probably archived them or just straight-up forgot about them altogether. You know it must have been a while ago too because some of the photos that come with each game feature players who aren’t even those teams anymore, like Oklahoma’s Kyler Murray.

Twitter is playing with our emotions by promoting these college football games that aren't happening. pic.twitter.com/zg2ImLWr8c

It’s also a little strange that so many of the games are Pac-12 games that appear to be happening at 9:00 a.m. PST. Not quite sure how that would have worked or even been set up. Not that fans of those teams would have complained right now…