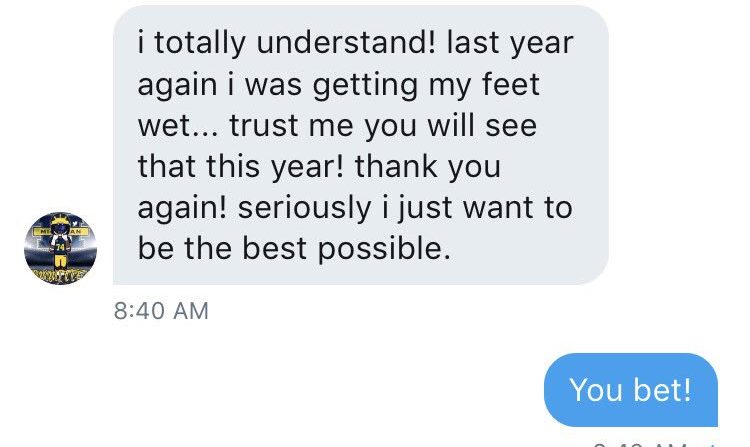 The life of a top high school recruit is more stressful than many sometimes stop to realize. While the value of a college scholarship may not be truly appreciated by a number of recruits out there when the time comes to make a decision, there are plenty of others competing on the football and practices fields and in the gym and on the courts that understand that receiving a scholarship is truly to be appreciated and only comes with hard work years in advance.

Recruits are also able to read as much coverage about themselves as they have ever have been exposed to in a growing recruiting industry, and sometimes they may not read the most flattering reviews of their recruiting stock. When reading something that came across a tad negative, one recruit didn’t bash ESPN’s Tom Luginbill and look to make a statement about the recruiting analyst.

Instead, he reached out to ESPN’s football recruiting expert and asked for some clarification on what was written and looked for a way to take that constructive criticism and use that to elevate his game.

Impressed by the way the exchange played out, Luginbill shared screenshots of the conversation from his phone and used that to demonstrate the maturity exhibited as a lesson for all potential recruits.

Luginbill did his best to protect the identity of the player, but the college football community on Reddit determined the recruit contacting Luginbill is a recent Michigan commitment, Chris Hinton. According to the 247 Sports composite ranking, Hinton, a strong defensive end and offensive tackle in high school, is the top-ranked strong defensive end in the nation in the Class of 2019, and the fourth-best recruit overall in the state of Georgia.

It is good to see a young player who is in the middle of his high school career do what he can to get some outside coaching on his own, and fortunately for him, Luginbill was more than willing to lend his words of advice. This is the power of social media today, where a kid can reach out to anyone and get advice on what he can do to improve his outlook.

I am now curious how many times Luginbill and other recruiting analysts get this kind of interaction from prospects, but I have to imagine Luginbill’s DMs might start to see a few more messages sent his way by high school players looking for any advice they can receive.