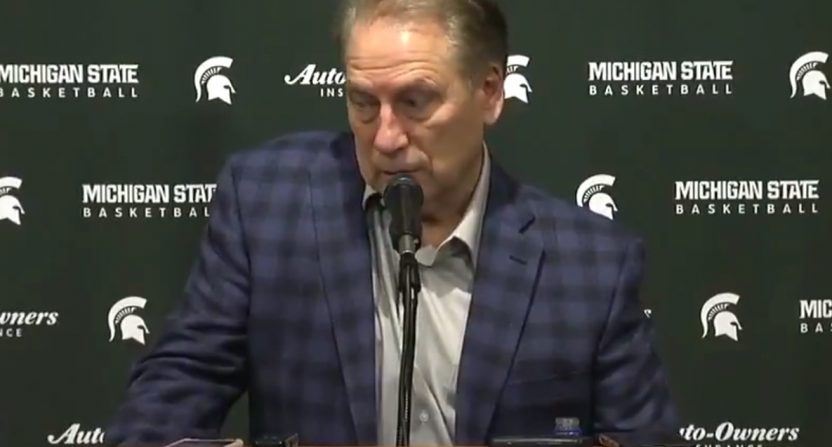 Hours after head football coach Mark Dantonio announced his retirement (amid possible impending scandal), the Spartans basketball team lost at home to Penn State, 75-70. It was Michigan State’s second consecutive loss, following a one-point defeat at Wisconsin Saturday, and first loss at home this Big Ten season. The Spartans previously lost to Duke at the Breslin Center in early December. The defeat dropped Michigan State to third in the Big Ten standings with an 8-4 record (16-7 overall).

After acknowledging that his team contributed to its own defeat with turnovers, missed layups, and second-chance points, Izzo then directed his criticism at the Spartans’ Twitter following.

"If there's any Michigan State people out there that are abusing some of my players on that freakin' Twitter…I'm sick of it."

“I’m gonna tell you something, guys, and I really mean this from the bottom of my heart,” Izzo said during the postgame press conference. “If there’s any Michigan State people out there that are abusing some of my players on that frickin’ Twitter… I’m sick of it. OK? I’m sick of dealing with what I gotta deal with on that.”

Izzo didn’t specify any players that Twitter criticism was being directed toward, surely cognizant that naming names might lead to further focused social media abuse. Though he did mention “a kid who’s been a 3.7 student who’s done more for this university than most of those people have.” Perhaps that could mean any of the players on Izzo’s squad. But it’s more likely that fans are going after a star player, maybe Cassius Winston. Winston scored 25 points, but missed a free throw and three-pointer toward the end of Tuesday’s loss that essentially clinched the outcome.

“It sure wasn’t his fault,” said Izzo.

Cassius is clean. 🥶@MSU_Basketball is coming down to the wire vs. Penn State on BTN.#BTNStandout x @AutoOwnersIns pic.twitter.com/PPOU6GJr7a

“I’m pretty proud of the 550,000 living alums,” the coach continued. “And it’s despicable, some of the things that have gone out there about some of our guys that have given more to this program than most of those alums or most of those people sitting behind a chicken keyboard.”

Izzo’s rebuke toward Spartans fans on social media comes a week after Duke coach Mike Krzyzewski reprimanded Blue Devils fans at Cameron Indoor Stadium for taunting Pitt coach Jeff Capel, a former Duke star. The circumstances may have been different with Krzyzewski taking issue at Duke fans insulting “one of us,” but it was a very public demonstration of dissatisfaction toward supporters. After Izzo’s remarks, perhaps other college basketball coaches will speak out against social media abuse directed toward their players.

Once upon a time, criticizing college players was frowned upon. Don’t insult kids who are still teenagers or barely in their 20s. As Izzo said, direct outrage toward the coaches. They’re the ones who are paid big money, they’re the ones leading and tutoring young men. But social media has obviously changed that sentiment. Athletes are more accessible than ever, thanks to social media, but that’s opened the window for fans to direct abuse from afar that they’d never voice in person.

Unfortunately, we’ll probably see even more of that Wednesday with high school kids taking criticism and insults for announcing where they choose to play football on National Signing Day.