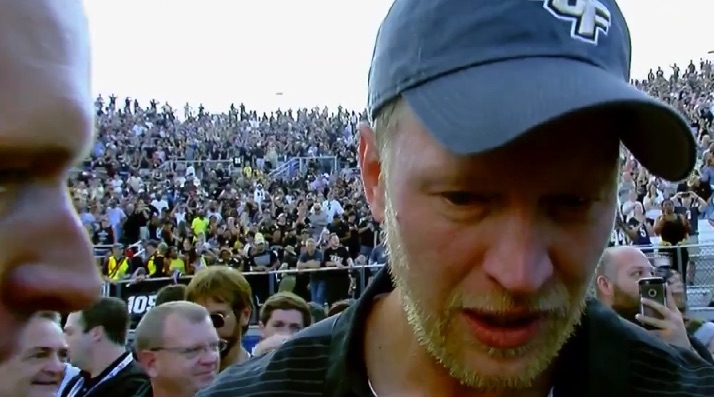 Sports media observers had some fun on Saturday, chuckling over ESPN’s Steve Levy crediting “our own” Brett McMurphy (who was laid off by the network in April) with reporting news that UCF coach Scott Frost had agreed to return to his alma mater and become Nebraska’s new head coach.

But with that news breaking as UCF was playing Memphis in the AAC championship game (eventually winning 62-55 in double overtime to complete an undefeated regular season), ESPN was placed in a rather awkward position. Frost was coaching UCF and had an obligation to those players, while the telecast had to focus on the game at hand. But the developing news about Nebraska was unquestionably a story, arguably taking priority over what was happening on the field.

So when sideline reporter Todd McShay got a few moments with Frost after the game, he naturally asked about what the bigger story was. Sure, it took away from UCF’s victory and put Frost in an uncomfortable position, looking as if he was abandoning his team for bigger and better things.

UCF head coach Scott Frost refuses to acknowledge reports that he has accepted the #Nebraska job.

Frost repeating “I want to go celebrate with my team” could be the 2017 version of Rasheed Wallace’s “Both teams played hard.” ‘Sheed would be proud.

However, as SI.com’s Richard Deitsch wrote in a column on the subject, McShay would not have been doing his job had he not asked Frost about accepting the Nebraska job. Had he not done so, it would’ve been the first thing critics and fans (other than UCF fans, perhaps) seized upon. This very post might have been about that instead. A reporter doesn’t want to appear to be shirking from the moment, and as Deitsch points out, networks like ESPN want to produce clips for news purposes.

Was there any reluctance to put Frost on the spot in the immediate afterglow of his team’s victory? Deitsch talked to the telecast’s producer, Josh Hoffman, about that and the answer was emphatic:

“Todd and I were in complete agreement on that. This was like any decision I made during the course of a game whether it is a replay, graphics or a camera shot. You make a decision about the person sitting at home. What do I want to see? What do I want to hear? If I am sitting at home watching that game, what do I want to ask Scott Frost. Given that we had just said he had reportedly accepted the job at Nebraska, we felt like it seemed like an obvious thing to ask. It was not a difficult decision from my standpoint. What would be your reason for not asking it?”

That’s it exactly. Even if the timing seemed awkward and UCF fans (along with coaches and executives) felt that it was taking away from a huge victory for the Knights, the question had to be asked. To not do so would have been ignoring the figurative giant pink elephant standing behind Frost as he was on camera.