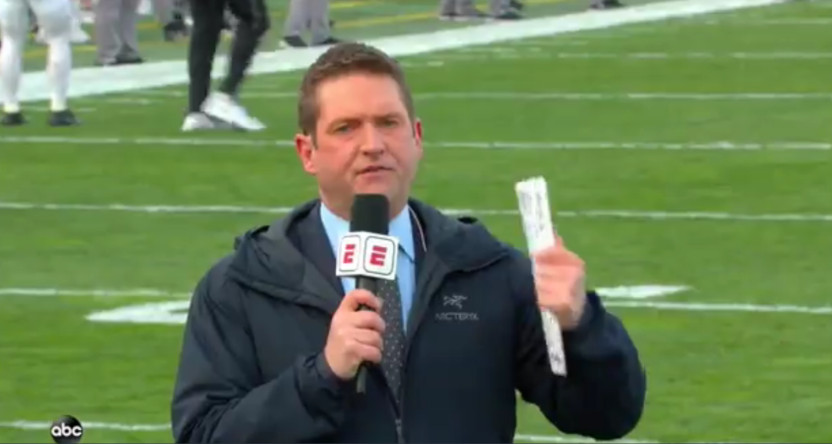 ABC’s coverage of Wisconsin-Northwestern Saturday saw something unusual, with field analyst Todd McShay (working the game alongside Sean McDonough, Todd Blackledge and Molly McGrath) leaving the broadcast partway through. In the second half, McDonough said that McShay had left the broadcast due to illness. But even McShay’s on-air hit opening the broadcast seemed off:

Todd McShay's opening comments on the Wisconsin-Northwestern broadcast. (He was later taken off the broadcast thanks to illness.) pic.twitter.com/ehWKzqXJpN

No. 19 Northwestern went on to beat No. 10 Wisconsin 17-7, a notable result. And that marked the first time the Wildcats had beaten an AP Top 10 opponent by 10 or more points since 1959. But the situation with McShay was certainly odd for those watching on TV.

McShay already faced one notable health situation this year, missing ESPN’s NFL draft coverage in April while he was recovering from COVID-19. We don’t yet know anything about what happened to him Saturday, but we’ll update this post if we receive more information on that.

Update: Richard Deitsch of The Athletic passed along comment from ESPN PR Sunday afternoon that they had nothing further to share at that time.

For those who asked about Todd McShay, who left yesterday's broadcast of Northwestern-Wisconsin due to illness.

Via ESPN PR: "We don’t have an update to share at this time."