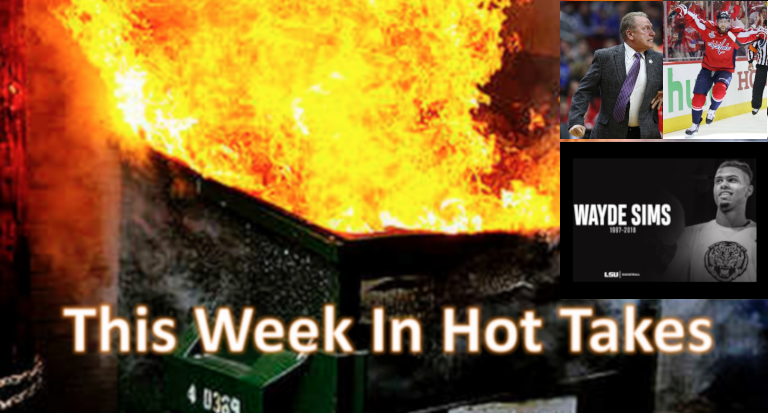 Welcome to another edition of This Week In Hot Takes. This time around, we’re breaking down the hottest takes from March 22-28.

5. Don Cherry calls Evgeny Kuznetsov a jerk three times over Kuznetsov’s bird celebration: For the third straight week, 85-year-old Sportsnet analyst Don Cherry shows up here. This time, though, he wasn’t going after the Carolina Hurricanes’ celebrations, or Swedish players on opposite teams who dare to talk to each other. But he managed to combine elements of both of those bad takes on Hockey Night In Canada Saturday, continuing his long streak of bashing European players by criticizing Washington Capitals’ Russian center Evgeny Kuznetsov for Kuznetsov’s flapping-bird celebration (starting around 5:10 here) after he scored a game-tying goal late against the Tampa Bay Lightning (Tampa Bay would go on to win in overtime):

“Watch the jerk here now after he scores a goal. This is a very important game here. This is like the two best teams here. Now he does the jerk thing like this. Now watch the overtime goal Hedman gets.

As noted before, it’s quite funny that Cherry has made an entire career out of look-at-me antics, takes and suits, and yet has a problem with any player expressing themselves. But hey, at least he didn’t make it explicitly about nationality here, the way he did when he bashed Kuznetsov back in January, saying “You do not make fun of a team when you score. You play the game. That’s the Canadian way. You listen to me. Don’t listen to anybody else.” Anyone who listens only to Cherry is going to have a very deluded perspective on life.

And sure, the Lightning went on to win, but the Capitals got a point thanks to Kuznetsov’s goal. And it’s not exactly proven that the Tampa Bay goal came from anything Kuznetsov did, and particularly not his celebration. But Kuznetsov had a good response to Cherry later this week:

“If he want to say something, he can call me or he can meet me, but to call me jerk on TV doesn’t make him look good, you know? But whatever he said, my parents teach me a lot of good things when I’m young, and I’m not going to say anything bad about a guy who’s much older than me.”

…You know, that’s what hockey should be for, for fun. Fans like it, and you know, the way [Cherry] talk, it doesn’t make him look good, right? If he thinks he’s good, he should check his record when he was coaching in the CHL and that’s it, he should shut his mouth.”

For the record, Cherry’s CHL record was 11-47-10 in one season as the Mississauga Ice Dogs’ head coach in 2001-02. Oh, and he refused to draft European players during his first couple years as part owner and general manager there (before his coaching role), eventually reversing that after his team only won three games in 2000-01. Oh, and his NHL coaching record (from 1974-80) is better at 250-153-77, but his tenure in Boston infamously ended with a too many men penalty, so he’s got that going for him. And since then, he’s been loud and obnoxious on TV, ranting about players he doesn’t like. Who’s the real jerk here?

You and Don Cherry have both criticized the Hurricanes’ postgame celebration — he called them a “bunch of jerks” and you called it “peewee garbage stuff” — but has any of it started to grow on you?

No. No. I think it’s embarrassing. I’m not going to change my view on it. I think it’s getting worse. The more choreographed and elaborate it is, the more embarrassing it is to me. The first couple were kind of spontaneous and I let it go. Now? I think it’s absurd. And by the way, I think Don and I speak for 85 percent of the fan base in Canada. I think the average Canadian can’t stand it.

Yes, the 63-year-old American Burke truly speaks for “the average Canadian,” and not all the Canadians who have praised and enjoyed that celebration and criticized Cherry for bashing it. Burke and Cherry do maybe speak for the average old, white Sportsnet analyst, but that’s about it.

3.  John Kincade asks “What moved them to the head of the line?” about Buccaneers’ female coaching hires: There have been more women getting chances to work as NFL coaches recently, and the Tampa Bay Buccaneers were the latest on that front, announcing the hires of assistant defensive line coach Lori Locust and assistant strength and conditioning coach Maral Javadifar this week. Naturally, some media members had to bang the “How dare you hire some different!” drum, including Atlanta radio host John Kincade of 680 The Fan:

Coach, are they they most qualified candidates for those positions? Please explain. What moved them to the head of the line? https://t.co/11dR7Ei8oh

First off, low-level NFL coaching hires have traditionally not been all about merit (if a true meritocracy is even possible, which it probably isn’t; it’s tough if not impossible to remove bias entirely), but have often included coaches’ sons, friends of friends and so on. In subsequent replies to this, Kincade said he’s criticized coaches’ sons’ hires too, which, fine, but that doesn’t make it any less of a bad take to be bashing these hires this way.

And both Locust and Javadifar absolutely have experience comparable to many hires at this level. Locust played semipro women’s football for four years, was the defensive line coach for the AAF’s Birmingham Iron, and served as a defensive coaching intern with the Baltimore Ravens last spring, while Javadifar has a doctorate in physical therapy from New York Medical College, completed a sports physical therapy residency at VCU, and has previously worked as a physical therapist and performance trainer.

Those are qualifications that wouldn’t raise many eyebrows if the hires in question happened to be men. And hires at this level wouldn’t have drawn any comment if they happened to be men; few people notice hires of assistant DL coaches or assistant strength coaches. But because they’re women, the bad-take brigade had to weigh in. To answer Arians’ question of “their gender’s different — who gives a shit?”, the answer is pundits like Kincade.

2. Mike Bell says Tom Izzo critics don’t know how “to make eye contact” or “shake hands like a man,” “I weep for our future”: Speaking of Atlanta radio hosts, there’s another one with a hot take this week. The world saw a whole lot of back and forth on Michigan State coach Tom Izzo’s on-court confrontation with freshman Aaron Henry, which Izzo defended by saying Henry wasn’t doing his job; critics pointed out that the NCAA insists it isn’t a job and that there’s a huge power imbalance between Izzo and Henry, while some players said it wasn’t a big deal and some media members argued that too much was made of it. But the real hot take came from 92.9 The Game’s Mike Bell, who decided to use this…to lob a bunch of general shots at young people?

Of course some people want to make a big deal over Izzo yelling at a player. The same people who can't get off their iPhone, don't know how to make eye contact, shake hands like a man, or know how to enter an elevator or merge. I weep for our future.

1. Dean Blevins says “Unless I missed it and somebody died, there is no such thing as a ‘tragic start’ for LSU,” ignoring that someone did die: Moving over to Oklahoma City, CBS affiliate KWTV sports director Dean Blevins proved why you should read an article before sending a snarky tweet about it:

Unless I missed it and somebody died, there is no such thing as a "tragic start" for LSU, or any team. Tragedy is kids getting shot in Chicago … or those with cancer. However … that ending was special. @news9 https://t.co/3eNHBSTBH8

Uh, yeah, the “tragic start” there was referencing the September death of junior forward Wayde Sims in a shooting outside a party. As the article pointed out. But no, Blevins couldn’t be bothered to read that before getting in his two cents about the supposed misuse of “tragic.” (And the bringing up of gun violence in Chicago is such a terrible trope at this point.) To his credit, Blevins did later apologize:

Sincere apology regarding the 'tragedy.' I hate it when people describe a sporting event as 'tragic' … and only saw the tweet that didn't include the part of about the fatal shooting. My bad … and prayers to those impacted. https://t.co/F09ImaVrVy

But he still provided our hottest take of the week.