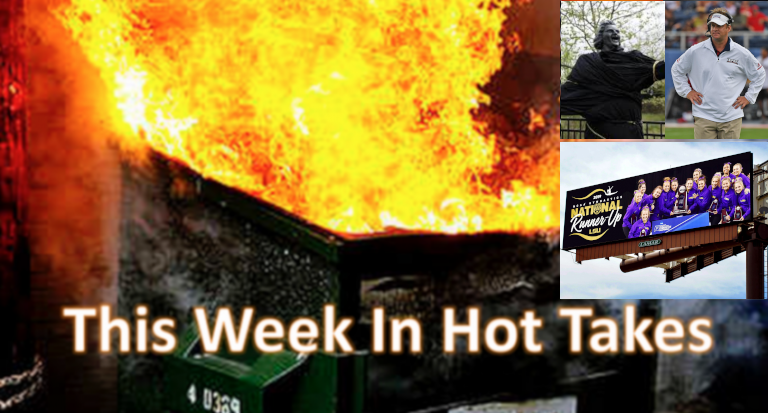 Welcome to another edition of This Week In Hot Takes. This time, we’re looking at the hottest takes from April 19 to 25.

5. Peter King and Mike Florio wonder how Kyler Murray “will handle adversity at the next level” because…he won too much? The lead-up to the NFL Draft is always full of curious reasons to knock prospects, and one of the most curious in a while came from NBC Sports’ Peter King and Mike Florio. King started this with comments on Kyler Murray in a mock draft posted Monday:

I do want to give you one cautionary tale on Kyler Murray, assuming he is picked here. Over the last seven years of football—three years of varsity high school football, a short one-year stint at Texans A&M, sitting a year at Oklahoma after transferring, mostly sitting in 2017 behind Baker Mayfield, and starting last year at Oklahoma—Murray has started 60 games. He is 57-3. Who knows if he starts right away in the NFL? But in the NFL, he could lose more starts in a month than he lost in the previous seven years. It’ll be interesting to see how Murray adjusts to adversity. Not sure he’s ever had much of it, at least in football.

Florio then endorsed this in a “great point” tweet, and in an article of his own:

Kyler Murray has had it easy in football. Very easy.  Maybe too easy.

Peter King points out in his latest Football Morning in America column that Murray has started 60 games over the last seven years. He has won 57, and he has lost three.

“[I]n the NFL, he could lose more starts in a month than he lost in the previous seven years,” King writes, and he’s right. And the question then becomes how will Murray handle adversity?

He probably won’t be able to handle it like he did after losing to Texas during the regular season, when a “good game” gesture from Longhorns quarterback Sam Ehlinger morphed into a perceived diss that echoed into the late-season rematch.

Florio goes on to make the valid point that Murray (the ninth overall pick in the 2018 MLB draft by the Oakland Athletics) does seemingly have a more compelling alternative sports option than most players, and that if things get really bad for him in the NFL, he might wind up walking away and choosing MLB. Okay. And yes, playing for a currently-bad NFL team like the Arizona Cardinals (who selected him first overall in the end) will be a change for Murray from his success as a starter in high school and college.

But “not sure he’s ever had much of it” on adversity seems foolish, considering that Murray’s initial college (Texas A&M, not “Texans A&M” as King writes) didn’t work out for him (the Aggies chose Kyle Allen as a starter over Murray, which, great move there; Allen went undrafted in 2018, but saw some time with the Carolina Panthers last year), that he had to sit out a year in 2016 thanks to that transfer and that he didn’t get to play much in 2017 thanks to the emergence of Baker Mayfield. All of that seems like at least some adversity. (To say nothing of the challenges Murray faced last season, like rebounding from that loss to Texas.)

And more importantly, while quarterback win-loss records are a bad stat that often says more about the team than the player, and aren’t a great thing in isolation to praise a player for, they feel like an even sillier thing to criticize someone for. You’re literally saying “He won too much,” and implying that these concerns wouldn’t exist if the player in question had lost a few more games. Also, many top college players come from good high school teams, and many top draft picks come from good college teams, so this is a “criticism” that could be levied against a lot of prospects. But it suggests that the analyst in question hasn’t found anything more meaningful to criticize.

4. Chris Torello says “there are no transfer portals in real life,” later apologizes with “dumbest tweet of my existence”: There have been a lot of NCAA coaches complaining about players transferring, and last Friday saw Florida Atlantic’s Lane Kiffin (who definitely never left one job for another, not in the middle of the night or anything) join that crowd. And that of course spawned some media reactions, with a lot of people dunking on Kiffin but some agreeing with him.One of those agreements came in particularly ridiculous fashion, from Chris Torello (a sports anchor for Tampa Bay’s Spectrum News 9 and Orlando’s Spectrum News 13). He’s since deleted the tweet, but here’s a screencap:

As many pointed out to him, “real life” is full of much less restrictive transfers; if you’re not a student-athlete and want to work at a place closer to an ailing relative, and that place wants you, there’s no regulatory body that would say “Sorry, no.” And much of the rest of the workforce often leaves one job for a better opportunity without being accused of being “mentally weak.” Even NCAA coaches manage to “transfer” all the time, regularly leaving jobs for better situations. To his credit, Torello apologized and admitted the error in his thinking:

I still wish more young people would stick it out at their school.

But yes what I said was like “ultimate” brain fart.

There are worse moments than a transfer portal tweet on here haha so I’ll take my small pound of flesh and move on. https://t.co/IfpmLygsH4

Next NFL CBA needs to make "voluntary" workouts mandatory. A player is essentially a company employee on a 7-8-figure salary. It's OK to say he should go to work 10 months a year.

Benoit then got dunked on by a bunch of NFL players and other media members:

We are waiting for your next ignorant comeback.. we have time

It’s possible to debate a CBA proposal to make those workouts mandatory. As mentioned above, there are numerous players who can’t really take the option to skip these workouts for fear of losing their job, thanks to the various ways the teams and owners have managed to undermine the “voluntary” part here. And agreeing to make these workouts mandatory could potentially be a bargaining chip used in exchange for other gains for the players’ association. But that’s a decision for the players’ association to make.

The real hot take here comes from Benoit’s suggestion that “it’s ok” to make players work more, and that they’d only work 10 months out of the year under this proposal. As many responses to Benoit noted, staying in the NFL is a year-round job as it is, one with a hefty physical toll, and even not attending a team-run minicamp doesn’t mean the player’s not working. There’s a good reason that players have bargained for those minicamps to be voluntary; there’s a significant gain for quite a few players from that. It’s not “ok” to just force them to give that up because a NFL analyst thinks they should work more, and if they do give that up, it should be in exchange for other gains. To his credit, though, Benoit did eventually backpedal a bit and say he’s open to both sides of the argument:

2. Will Cain defends Kate Smith’s “That’s Why The Darkies Were Born” and “Pickaninny Heaven”: The New York Yankees pulled Kate Smith’s version of “God Bless America” from their rotation this season. This week, the New York Daily News reported that the move was made after accusations of racism against the singer (who died in 1986) over World War Two-era jingles like “Pickaninny Heaven” and “That’s Why The Darkies Were Born” (with lyrics about “colored children” fantasizing about a place with “great big watermelons” and “someone had to pick the cotton. … That’s why darkies were born.” respectively). That led to a whole giant debate, and to the Philadephia Flyers not only axing Smith’s version of the song, but also covering and planning to move her statue. And while even the likes of Mike Francesa understood the rationale for that move, ESPN “balance-bringer” Will Cain decided to argue that it’s unfair to move away from Smith’s songs now because…racist lyrics were socially accepted at the time of these recordings.

“It’s an absolute and utter fool’s errand to go back through history, decades, someone who’s been passed away for 30 years, incidents that occurred eight decades ago, and apply modern historical standards to something you can almost reach a century. I’m suggesting that your standard, yours, only requires a handful of people to be a little outraged to go back and tear statues down. And I’m telling you that by your standard, President Obama’s statues would not stand today when it comes to gay rights, and that is asinine.”

As Stephen A. Smith (for once the voice of reason) points out in response to Cain, “That’s easy for you to say, because you’re not the offended party.” And yeah, it’s not a great look for Cain to claim that no one else should be offended by Kate Smith’s songs and that teams should continue to embrace her just because he isn’t offended by this. It’s not about if he’s offended or not; if people actually targeted by these lyrics have a problem with them and have a problem with teams continuing to associate with someone who recorded them (and many do have a problem with that), that seems much more important than what Will Cain thinks.

1. Darren Rovell criticizes LSU’s gymnastics team for celebrating their second-place national finish with a billboard: Action Network pundit Rovell has dropped plenty of controversial takes over the years, and he picked a particularly unusual hill to take a stand on this week; not only criticizing LSU’s gymnastics team for billboards celebrating a second-place finish at the national championships, but saying “No, you can’t put up a billboard for coming in second.”

No, you can’t put up a billboard for coming in second. https://t.co/wxDPqBNzNr

Well, first, they can and they did, Darren; you may be a fan of making up rules for everything, but even you don’t follow those. Beyond that, second-place finishes and below are celebrated all the time; in the Olympics, there’s a ton of publicity for those who win silver or bronze medals, and all sorts of teams celebrate divisional championships, conference championships, College World Series appearances, Final Four appearances and beyond. Also, this billboard is not just a celebration for the athletes involved, who accomplished remarkable things (including Sarah Finnegan, who won the AAI award as the country’s top senior female gymnast), it’s also thanking the fans who supported them at home meets. And, as gymnastics writer/analyst Lauren Hopkins pointed out, Rovell himself has celebrated far, far more insignificant accomplishments:

The guy saying second-best-in-the-nation LSU doesn’t deserve a billboard? He placed 21,463rd in a marathon and got the shoes he ran it in plated in gold. https://t.co/QFiZ0gJDRw

Although, to be fair, it is somewhat impressive that Rovell finished a marathon when you consider his running form:

Yes, those are definitely the top-tier athletic skills of someone with great credentials for telling athletes and teams what they can and cannot celebrate.

Honorable mentions: Tony Grossi for “Hey Odell, where are you?”, Robin Miller for “Sorry, Tiger, these are the real comeback stories.”