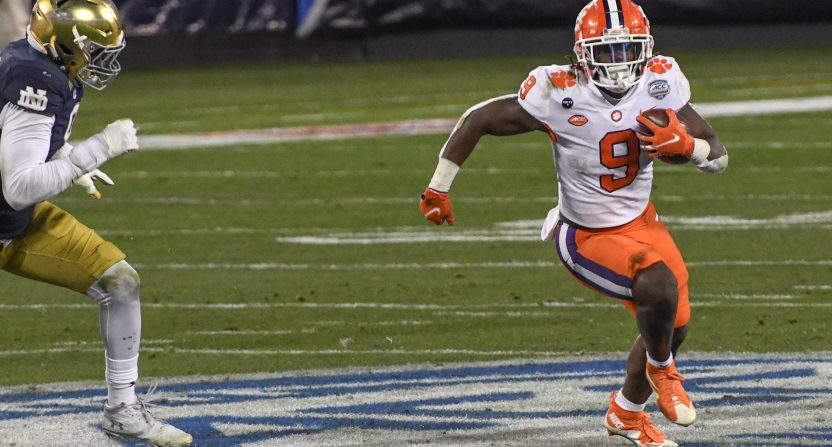 In a 2020 that has been anything but normal, college football’s Championship Saturday provided the latest twist. That twist didn’t come in the results of the games, but instead, the start times. The SEC Championship moved into primetime from its usual mid-afternoon slot. The Big Ten title game jumped from primetime to noon. The Conference USA and MAC Championships moved from Saturday to Friday. The ACC title game moved from primetime to mid-afternoon, while the American title game went the other way. The two title games that didn’t move timeslots were the Big 12 (remaining at noon) and the Mountain West (staying in the mid-afternoon, though earning a promotion from ESPN to Fox).

On Friday night, the MAC championship drew 875,000 viewers on ESPN. That’s up 144% from last year’s game, which drew 358,000 million viewers on ESPN2 at noon on Saturday. Over on Fox, the Pac-12 title game drew 3.847 million viewers, down 34% from last year’s game (5.856 million on ABC). The Conference USA championship aired on CBS Sports Network, which is not rated by Nielsen.

There were also several non-championship conference games that took place on Saturday. The only one of those to top a million viewers was Texas A&M vs Tennessee, which drew 1.663 million viewers at noon on ESPN.

So of the eight title games, five were down compared to last year’s game, and those five were all down by more than 30%. The three games that were up increased by at least 140%.

I think the most telling sign regarding college football viewership in 2020 is that Clemson-Notre Dame, way back in Week 10, is still the only game of this season to draw at least ten million viewers and one of two prior to Championship Week to top seven million viewers. Last year, there were eight going into Championship Week (including Ohio State-Michigan, which was cancelled this year) and another three on Championship Saturday. This year, the rematch between the Tigers and Fighting Irish couldn’t even top ten million, let alone hit the 13 million mark posted by both LSU-Georgia and Ohio State-Wisconsin last year.

The audience for top-level college football has disappeared this season, and that is quite worrying for the sport and its TV partners (most notably, ESPN) going into bowl season. Are fans going to be excited for yet another dose of Clemson-Ohio State and Alabama-Notre Dame in the College Football Playoff? If the viewership for the regular season is any indication, probably not.