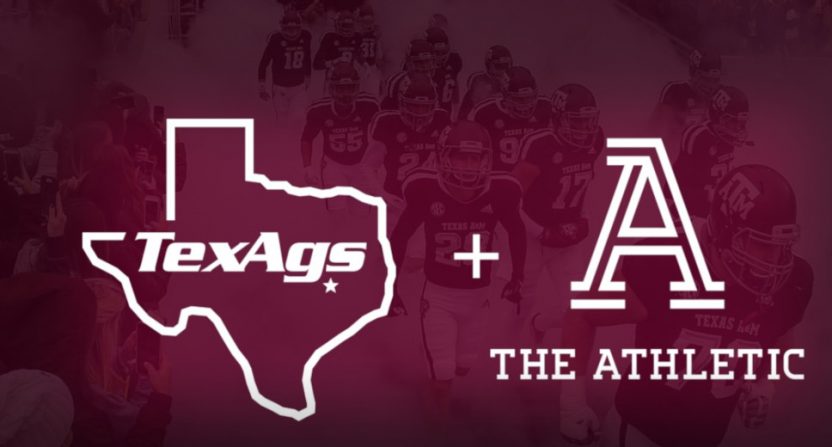 One of the notable questions about The Athletic’s expansion of their college football beat coverage is how they’ll do in a market that already has a lot of popular team-focused subscription sites (in addition to Rivals and Scout/247 sites, there are also plenty of independent ones), and what their entry will mean for those sites. We got an interesting answer to those questions Tuesday, as The Athletic has now partially joined forces with an independent team coverage site, the Texas A&M-focused TexAgs.com. Both outlets will now provide some of their coverage (but not all of it) to the other one. Here’s more from the TexAgs piece on that:

As we near kickoff of the 2019 college football season, we have a new opportunity to offer TexAgs Premium subscribers access to selected premium content from The Athletic. This partnership will enable us to provide our community some exciting new coverage of the national college football and basketball landscapes, the NFL draft, and more.

The Athletic continues to prove itself an exceptional source for sports coverage of all kinds, announcing another expansion of their national college football reach Monday. TexAgs is excited to fill that role in The Athletic’s coverage of Texas A&M by also providing them with a regular selection of our content.

“I think it’s awesome because TexAgs knows everything about Texas A&M,” said Andy Staples, college football writer for The Athletic. “I know you guys know everything that’s going on at Texas A&M, and that’s really what The Athletic is about is owning a beat. There wasn’t anyone else we could go to where we say, ‘We own this beat.’”

The model and mindset of The Athletic is a natural fit for a cooperative relationship with TexAgs, and we are excited about the opportunity to both provide our subscribers new content from some of the best in the business and grow the reach of our coverage of Texas A&M athletics.

“We at The Athletic know Aggies fans are fired up about Jimbo Fisher and the coming season,” The Athletic’s editor-in-chief for college football Stewart Mandel said. “We’ve long admired the quality of TexAgs’ coverage, and this partnership should be exciting for both sites’ subscribers.”

That piece also mentions that there are more details to come, but that the main change for existing TexAgs subscribers will be the ability to read some Athletic content on TexAgs. So that will be useful to those who have a TexAgs subscription and not an Athletic one. Similarly, it’s only “a regular selection” of TexAgs content that will appear on The Athletic, but that will be useful for those who have Athletic subscriptions and are looking for some Texas A&M coverage there. And it could be particularly useful for fans of teams set to play the Aggies; they’re probably not looking to subscribe to a Texas A&M site, but they might be interested in doing a bit of research on an upcoming opponent, and this could be a way to do that under The Athletic’s umbrella.

It’s interesting to see this kind of move, as The Athletic’s actions so far have often seen them competing with others rather than partnering with them. They’ve hired a ton of writers from other outlets (local newspapers in particular, which has produced some backlash), and co-founder Alex Mather even said in a 2017 New York Times interview that the plan was to “wait every local paper out and let them continuously bleed until we are the last ones standing” and “suck them dry of their best talent at every moment.” (He later apologized for his tone and walked that back a bit, but the message of fierce competition still largely stood.) They have proven willing to hire writers who also work for video outlets (including Ken Rosenthal, Jay Glazer and Bruce Feldman with Fox and Shams Charania with Stadium), but that’s a bit different; that gives them some big names, and those writers’ video work isn’t really competing with most of what The Athletic is doing.

However, this sort of partnership does seem to make some sense for both sides. TexAgs has been running for a couple of decades and has a massive staff, and they’re popular and widely-read by Aggies’ fans. By making this kind of deal, The Athletic can bring in some top Texas A&M content for their subscribers. And as Staples notes in the interview quoted above, they can now make a claim to owning the Aggies beat, even if that’s through a partnership rather than just directly hiring a top writer.

Meanwhile, partnering with The Athletic seems like a better outcome for TexAgs than directly competing with them, and the ability to put some Athletic content on TexAgs might provide their subscribers with some extra value. It’s going to be worth keeping an eye on how a partnership like this works on the subscriber side, though; will TexAgs lose some subscribers who only want some of their content and can now get it and more through an Athletic subscription, will they gain subscribers who see some of their content on The Athletic and want more of it, or both? And will there eventually be some sort of bundle where people can subscribe to both sites for a discount?

Beyond that, an important bigger-picture question is if this is an isolated partnership thanks to factors specific to Texas A&M and TexAgs, or if this is something we’re going to potentially see more of from The Athletic. In college football in particular, it’s an approach that might make some sense; there are lots of subscription sites out there with talented writers and dedicated followings, and maybe it’s sometimes worth teaming up with them instead of trying to beat them. We’ll see if they do more along these lines.