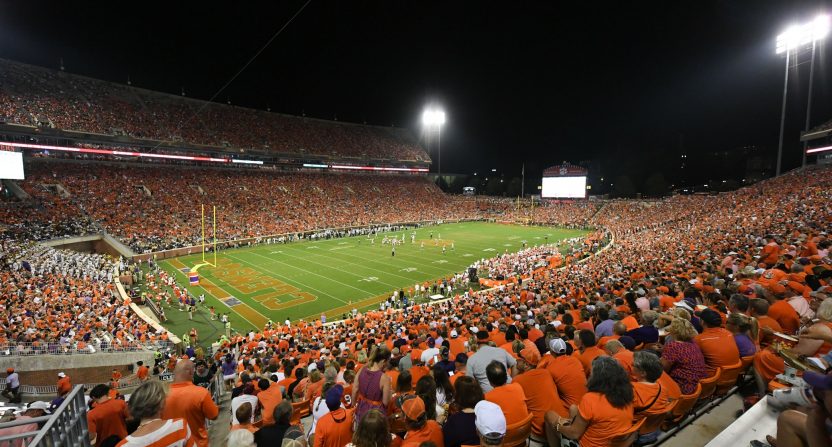 Despite two Power 5 conferences postponing their football seasons, the Associated Press still plans on rolling out its Top 25 polls each week throughout the fall.

But in an odd twist, the preseason poll (which will be released on August 24th) will contain teams from all conferences, even those that won’t be playing in the fall.

The AP’s Ralph D. Russo wrote a column about this season’s polling, which will be unlike anything we’ve seen before. AP global sports editor Michael Giarrusso outlined some of the decisions.

The AP has asked its voters to consider all Division I teams when filling out their ballots, so the preseason poll is expected to include teams from conferences that have decided not to play this fall. After games begin, voters will rank only teams that are scheduled to play.

“The preseason poll has always been a speculative ranking of teams based on last year’s results and knowledge about the new makeup of teams,” said Michael Giarrusso, AP’s global sports editor. “This year, we think it is crucial to give all the teams and all their fans a snapshot look at what the Top 25 would have been to open the season.”

“The AP will collect and distribute the votes of our media panel as we always have,” Giarrusso said. “Once games kick off, it does not make sense to rank teams that are not participating. There is no solution that will satisfy every fan or every team. But ranking teams that play is the one that makes the most sense.”

It’s sure going to be strange to see a team ranked in the top five before the season, and then listed among the teams that fell out in the first in-season poll of the year.

If spring football is played, the AP also could release a separate set of rankings each week for the teams competing then as well.

“The AP and our voters have no idea what a spring football season will look like. But we are open to adapting and finding a way for our Top 25 voters to be involved in ranking teams if real games are played in the spring of 2021,” Giarrusso said.

This is going to lead to a situation where a sub-.500 Power 5 team is ranked at the end of either season, isn’t it? I’m sure that will go over well with some Group of 5 schools.

What might be cool is if the AP national champion wasn’t decided until the start of the fall of 2021 with a Super Cup of sorts between the fall champion and the spring champion. That probably wouldn’t be feasible because of graduating seniors and players leaving for the NFL Draft on both sides, but I think it would create a marquee matchup to stat the season with something actually on the line.