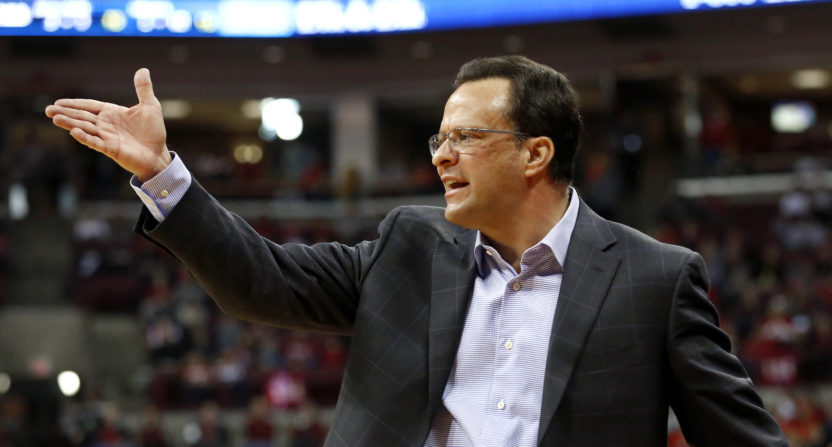 Thad Matta was the rumored favorite to land Georgia’s head basketball coach vacancy and according to reports today, he was indeed offered the job. Unfortunately for Georgia, those same reports are all in context of Matta turning down the gig.

Former Ohio State coach Thad Matta told ESPN that he has withdrawn from consideration for the Georgia head coaching job.

Matta met with Georgia officials twice this past week and was offered the head coaching job, sources told ESPN. Matta also met with officials at Ole Miss earlier this month.

Matta did his part to talk about how great the job was, which was considerate of him, although it rings a bit hollow coming from someone who just turned it down:

“It was the most difficult decision because Georgia is a tremendous opportunity for a coach to build a great program,” Matta told ESPN. “Unfortunately, I just don’t feel that I am completely ready at this point to give (Georgia athletics director) Greg McGarity and the University of Georgia what they deserve. It’s truly a special place and he is a tremendous leader I would have loved to work for.”

With Matta out of the running, it’s not clear who Georgia will turn to. But there has been one name in the rumor mill that would actually make a lot of sense: former Indiana coach Tom Crean. And according to reports, the two sides have had contact, while Sporting News reported that Crean has interest in the job:

Tom Crean, currently working as a studio and game analyst for ESPN, will be interested in the position, a source told Sporting News.

Crean and Matta are similar in that both worked at high-level programs in a major conference, both had success, and both were fired after last season. With Matta out of the running, though, Crean makes a lot of sense for Georgia and it’s no surprise he’s interested. For one, Georgia is a football school, and they’re poised to be at the top of that sport for the foreseeable future. That means less visibility for the basketball program, but it also means lowered expectations.

Crean did a ton of good at Indiana, bringing the program back from the brink and delivering two conference championships and three Sweet 16 runs during a five-year span. But he also missed a few tournaments and struggled to endear himself to fans, which isn’t necessarily a condemnation. An environment where Crean could recruit the southeast and the mid-Atlantic region (the latter of which he did very well at Indiana), utilize Georgia’s resources, and build up a program that doesn’t have the weight of long-dormant past success?

It’d be a great landing spot for him.

Yes, he’ll make funny faces, and hike his pants up, and drink a million Diet Cokes, and say some weird stuff at press conferences. But he’s also appeared more relaxed during his revelatory television work at ESPN this season. It’s entirely possible that carries over to his next job. He certainly deserves a good one, and he’s clearly a good coach.

Whether it’s Georgia or somewhere else, some school will be lucky to hire him.