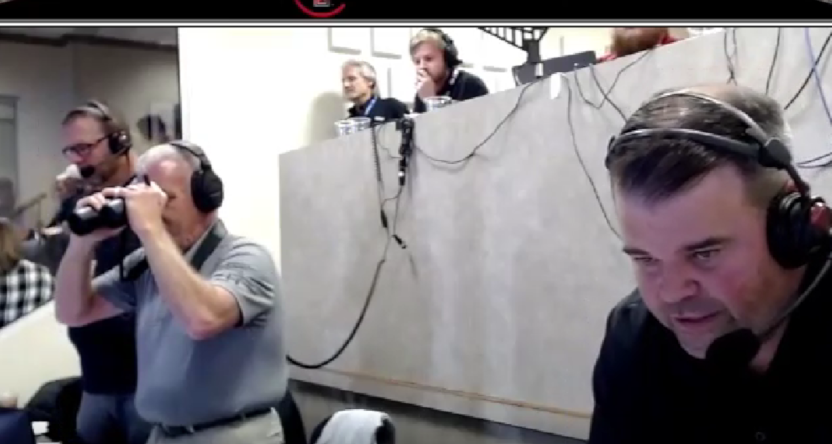 Perhaps the weirdest college sports story this week came from the Big 12 league office issuing a public reprimand and a one-game suspension for long-time Texas Tech football radio announcers Brian Jensen and John Harris, claiming that “Questioning the integrity of Conference officials and specifically calling out members of the officiating crew is well beyond appropriate and permissible behavior.” (If that’s the case, most teams’ radio broadcasts are violating that regularly.) As noted in our initial coverage of that, unlike cases where schools have suspended an announcer, Texas Tech did not seem to show much support for that league decision; they didn’t even mention it on their website or update their game preview to note different announcers.

However, in the end, the school did adhere to the conference’s ruling for Saturday night’s game against Oklahoma State. The conference did not spell out which members of the broadcast team were banned, but Texas Tech senior associate athletics director Robert Giovannetti told The Lubbock Avalanche-Journal it was only Jensen and Harris banned. That let them move sideline reporter Chris Level (seen at left above) up to the analyst role in the booth, and bring in Geoff Haxton (seen at right above, with their spotter in the middle), who usually calls Red Raiders’ basketball and baseball games, to handle play-by-play. So far on the broadcast (which can be seen on the school’s athletics website with an accompanying broadcast booth cam, which is a tremendous idea we’d love to see become more widespread) has been relatively standard, but Haxton did have a good line when it came to introducing the officiating crew: “Let me give you the officiating crew, just don’t get me in trouble.”

This also wasn’t the only nod to the missing Jensen and Harris. In fact, they were on the field pre-game as part of a (presumably previously planned) ceremony for long-time producer/engineer Steve Pitts, in his 43rd and final season in the radio booth:

? #TexasTech: The great Steve Pitts will be recognized for 43 years in the radio booth tomorrow night before the game— he will be joined on the field by Brian Jensen @broadcastbooth, John Harris, and @ChrisLevel. The Jones gonna go crazy when they come out!! #ThanksPitts ? ?? pic.twitter.com/E422JgwxqT

The position of this corner remains that it’s absurd for a conference to step in and suspend a school’s radio crew for criticizing the officiating. If there’s an actual issue with what a school’s radio crew says, the most the conference should do is talk to the school about it. And it’s particularly unfair to hand down a suspension over the head of the school without recognizing that these kinds of statements are regularly made elsewhere, and without citing the specific statements in question. It’s also problematic to blame the whole booth when you’re only banning the play-by-play voice and analyst; there are a lot of people involved in that broadcast who had nothing to do with the comments the Big 12 is taking issue with.

And what Jensen and Harris said really isn’t that out of the usual for a school radio broadcast. They said “The Big 12 should be embarrassed,” which has probably been heard with reference to officiating on every single Big 12 school’s broadcast at one point or another (and in other conferences as well; it’s not like the Big 12 is the only place where officiating takes criticism from the radio booths, or from other members of the media). And sure, they named the officiating crew, but as the Haxton video shows here, that’s normal at the start of broadcasts anyway; they weren’t specifically encouraging any sort of harassment or violence against them, they were telling listeners which officials were making these calls.

At any rate, Jensen and Harris aren’t on the call for this game. But Haxton and Level have been doing a good job so far. And the nod from Haxton to his suspended colleagues in the official announcements was a nice and subtle one.