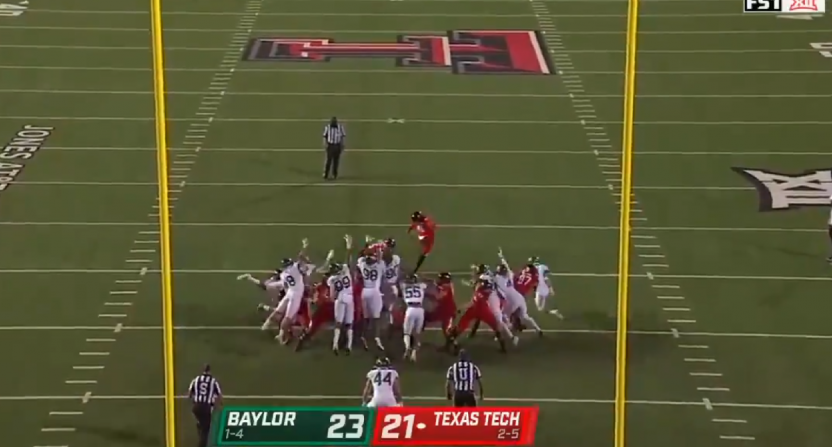 Leading 23-21, Baylor had the chance to put the game away against Texas Tech, needing some first downs and/or a touchdown to seal it. They couldn’t do that, though, and the Red Raiders promptly moved it down the field.

Also, a key play in keeping it to this deficit: this ridiculous goal-line tackle from earlier in the game.

Don't try and run when @SchoolerColin is around ?

He delivers a HUGE hit to help @TexasTechFB hold Baylor to a field goal pic.twitter.com/Sc6A4U6K93

Texas Tech somehow ran 12 plays and marched 79 yards in just 2:14, thanks in part to two catches by receiver Dalton Rigdon, who I’m mentioning because we have the same last name, and when I heard the broadcast say “It’s Rigdon!” my head snapped around. (Not a common name, much less for athletes, unless you remember journeyman junkballer Paul Rigdon, which you shouldn’t.) Rigdon’s catches went for a total of -11 yards, but nevertheless!

Back to more important plays! With a minute or so remaining, Texas Tech faced 3rd and 8 from Baylor’s 22. They elected to call a run up the middle, and SaRodorick Thompson broke it for 15 yards, with more daylight in front of him. There was definitely a chance he could have scored a touchdown on the play, but he elected to slide down at the 7, directly between the hashes.

This baffled the booth, who couldn’t understand why he wouldn’t have simply scored or at least tried to score. (After the game, Fox analyst Reggie Bush would wonder the same.) The reasoning should be obvious: a touchdown and PAT would have given the ball back to Baylor with around a minute left, a timeout, and a chance to win the game. Down two points, Thompson’s move seemingly guaranteed a chip shot field goal for the win.

There are obviously other factors there; turnover risk is a big one, of course, and all of the variables you can think of to add to the main debate of “better chance of happening: converting a short field goal vs. preventing a touchdown in a minute.” We’re dealing with college kickers, here, so it’s not automatic even up close. But we’re also not dealing with just any college kicker; Texas Tech recently named Jonathan Garibay both punter and kicker, and he’d already made three field goals on the day, in addition to a few ridiculous punts that pinned Baylor deep.

After calling timeout with just seconds remaining, and after Baylor used their final clock stoppage in an effort to ice Garibay, the game came down to this field goal.

A fun ending to a fun game, and Garibay deserves all the possible special teams accolades he can get. Four field goals, including the game-winner, while also punting? That’s just about as big of an influence as a specialist can have on a football game.