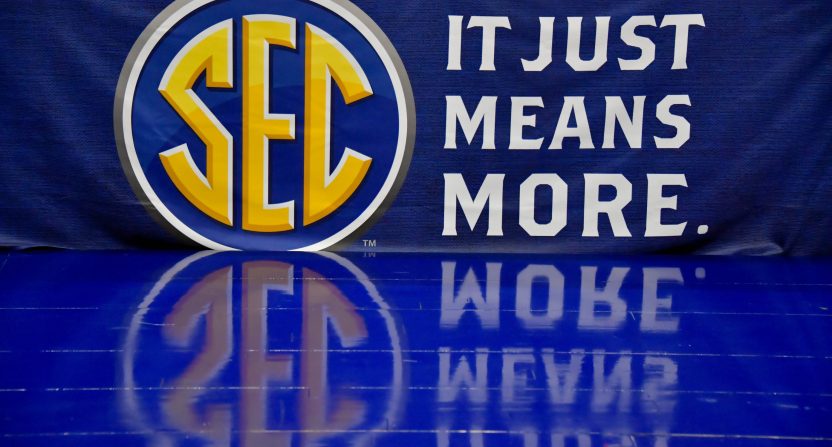 A notable sidebar to the story of the SEC’s TV money lapping the (non-Big Ten) competition even ahead of the upcoming additions of Texas and Oklahoma (and the extra money likely coming in there) is how the conference was doing that with a schedule of only eight conference games a year. The Big 12, Pac-12, and Big Ten have all been playing nine conference games lately, and they’ve lobbed some complaints at SEC teams for their lower conference schedules. Yes, some of the SEC’s out-of-conference matchups are prominent games at neutral sites or in a home-and-home series, but some of them have been easy wins against Group of Five or FCS teams, which have drawn a fair bit of criticism.  And Andy Staples of The Athletic writes that the additions of the Longhorns and Sooners might prompt the SEC to go to a nine-game conference schedule, which could see some of those easier (and less valuable for TV) games going by the wayside:

While the SEC taking Oklahoma and Texas from the Big 12 has caused fear and panic throughout the rest of college sports, it’s possible this acquisition will push the SEC toward a move fans, coaches and administrators in other leagues have wanted for years. When the Sooners and Longhorns arrive in the SEC — no later than July 1, 2025, but a settlement might get them there sooner — the SEC may begin playing nine conference games in football.

Multiple sources from various SEC schools confirmed this weekend that a nine-game conference schedule is one of the possibilities the league will consider as it works to assimilate Oklahoma and Texas. How exactly that would look also would be open for discussion. The league could assign permanent opponents to each team and rotate through the remaining teams. The league could split into four, four-team pods and rotate the schedule that way. The league also could keep two divisions, though there is fear that might seem like two separate conferences. “Everything is on the table,” one source said.

There are of course some challenges with adding another conference game. One is about having your teams in strong position for the College Football Playoff and the other bowls. Home non-conference games against teams unlikely to beat you can be quite useful for bolstering your win-loss record and points margin, and for less-successful SEC teams, they’ve often been very important towards achieving a .500 record and a bowl berth. Those games also give the SEC schools another home date each year, whereas a league game or a more competitive game would likely only be at home every other year.

It should be noted that the current setup comes with significant benefits for the Group of Five or FCS opponents. The money those teams receive for a road date against a power conference team often helps to fund their overall program, and those games often come with better TV exposure than their own league games. But, with that said, there are quite a few reasons for the SEC to look at adding another conference game, both for TV and for in-person fans. For in-person fans, Staples mentions that any sort of nine-game schedule (he also has plenty of proposals for what that might look like) would lead to SEC schools visiting current cross-division opponents more frequently, which would be a more interesting and more valuable ticket for the home fanbase. And, for TV, this would add more games with SEC schools facing Power Five opponents, and there’s lots of TV appetite for those games.

This also should be considered in light of a potential playoff expansion to 12 teams. If that happens, that’s probably another reason for the SEC to move towards nine conference games. In the seven years of the four-team College Football Playoff so far, the SEC has had eight teams involved. That’s tied with the ACC for most, with the conference champion picked every year and SEC Championship Game runner-up Alabama also picked in 2017-18 (where Alabama would go on to beat Georgia in overtime in the title game). So the current system was absolutely working fine for them, as commissioner Greg Sankey told Paul Finebaum last week.

But the SEC is still definitely interested in an expanded playoff (and Sankey was part of the sub-group that wrote the particular 12-team proposal under consideration here). And a 12-team setup would likely see them with at least two teams in each year, and could see them get three teams in on many occasions. While that might not lead to quite as much of a percentage of playoff participants as a consistent 1/4 that could occasionally rise to 2/4 under the current setup, it could still lead to a lot of money around the extra games.

At any rate, none of this seems certain or decided at this point. But it is interesting to see Staples citing multiple SEC sources saying that a nine-game conference schedule is one option under consideration around the additions of Texas and Oklahoma, and to see him also discuss the nine-game talks ahead of the addition of those schools. It’s certainly not for sure that the SEC would have forever stayed at eight conference games without these additions, but bringing in the Sooners and Longhorns does seem to have bolstered the nine-game discussion. And that could be very, very good indeed for SEC TV partner ESPN, and might further speak to the benefits they’re likely to see from this particular realignment.