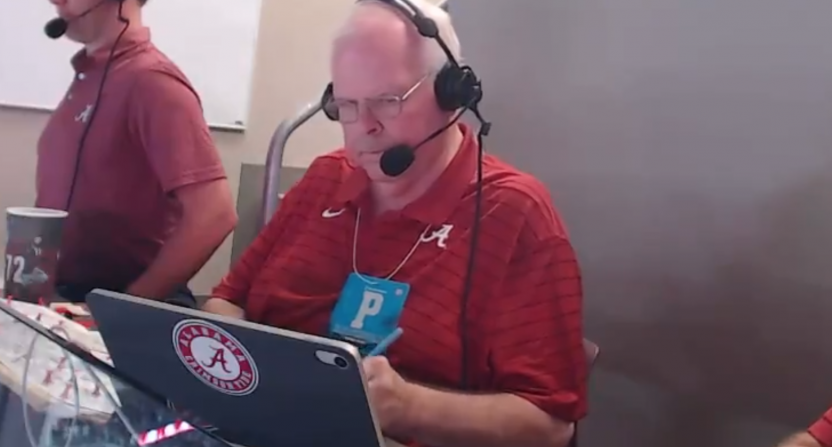 How did Texas A&M’s upset of No. 1 Alabama Saturday night sound on the radio?

Well, on the Alabama side, Crimson Tide play-by-play broadcaster Eli Gold didn’t have much to say when the Aggies’ Seth Small kicked a 28-yard field goal as the clock ran out for a 41-38 victory. Gold, who’s called Alabama football radio broadcasts since 1988, opted to let the crowd noise from Kyle Field as Texas A&M fans celebrated, rather than provide any narration.

The Alabama radio broadcast was silent for 30 seconds, providing audio of the Aggies fans cheering, before Gold explained that Texas A&M would be fined $250,000 for the fans running onto the field.

“Well, the league is going to get themselves $250,000,” said Gold, “because everybody who does not have a seat and those who did have now flooded the field here at Kyle Field in College Station. The scoring drive, eight plays, 54 yards.”

(The $250,000 penalty is an SEC rule, implemented in 2004, prohibiting “access to competition areas” by anyone who’s not a student-athlete, coach, official, support staff, or otherwise credentialed personnel for the safety of participants and spectators.)

Fans watching the broadcast through Crimson Tide Sports Network “Booth Cam” or checking in on social media (via broadcast oracle Timothy Burke) got a different look at Gold’s call, which depicted a broadcaster who appeared less than pleased with the result.

It’s surely not fair to attempt interpreting Gold’s mood or demeanor through his facial expressions. The man was working and probably getting the information he needed to convey to the broadcast audience. But those taking joy in Alabama’s defeat likely saw someone who wasn’t happy about the Crimson Tide’s loss. (And many have pointed out the apprehensive reaction of the spotter in that broadcast booth.)

Hey, Gold hasn’t had to call too many Alabama losses during Nick Saban’s tenure as head coach. Saturday’s defeat was the Crimson Tide’s first loss of the 2021 campaign and the team didn’t lose at all last year on its way to another national championship.

Since Saban took over at Tuscaloosa in 2007, Alabama has never lost more than three games in a season — and that only happened once, in 2010. The Tide has only lost two games in four of Saban’s 15 seasons. As most college football fans know, this just doesn’t happen very often.

Naturally, the sounds were much more joyful on the Texas A&M side, courtesy of Aggies play-by-play man Andrew Monaco and analyst Dave Elmendorf.