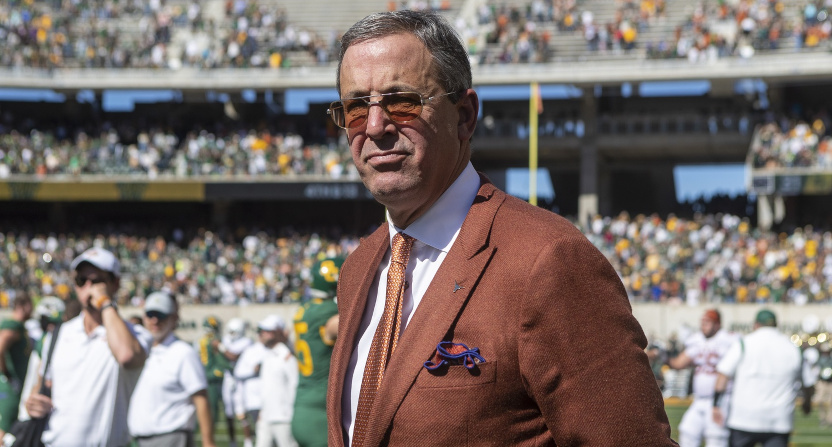 When the news of Texas and Oklahoma leaving the Big 12 for the SEC (by at least July 1, 2025, but possibly sooner) came out last summer, it seemed likely that would mark the end for Texas’ Longhorn Network partnership with ESPN. Longhorn Network’s only live games come from third-tier rights (what usually winds up on conference networks or their equivalent, which is ESPN+ for non-Texas Big 12 schools, now also including Oklahoma under a slightly different setup), and SEC schools’ versions of those rights tend to air on the SEC Network, its alternate feeds, or its MVPD-authenticated digital platform SECN+, so there was some logic to projecting that ESPN would close LHN when Texas moved to the SEC and shift the LHN content they wanted to keep to some version of SECN.

But that wasn’t a 100 percent certainty given that all of this is under ESPN/Disney ownership. It was certain that ESPN would have the rights, and likely that they’d have them on SECN instead of LHN (despite LHN’s contract with Texas running through 2031, ESPN can end that early, and that money might even wind up used for Texas/OU Big 12 exit fees), and probable that that would spell the end for linear LHN, but not assured. Texas athletic director Chris Del Conte (seen above during an October 2021 road football game at Baylor) confirmed in remarks at an event in Dallas Wednesday night that Longhorn Network will be going away with the SEC move, though:

CDC said LHN has been a great partner, but they’re ready for the SEC Network when they make the conference switch.

“New blood and we’re ready to roll,” he said. #HookEm

Texas AD @_delconte said the Longhorn Network @LonghornNetwork, aka the History Channel, is dead when the move to SEC occurs. pic.twitter.com/AC9JeTG5y7

The History Channel line there (much of LHN’s non-game content is material looking back at past Texas championships) took off on Twitter, and that led to Del Conte saying that he meant the comparison in a good way:

I love our relationship with the Longhorn network and my comments tonight talked about if you ever want to learn about our rich tradition and history of our great University past and present LHN is like the history channel it’s incredible resource for Texas ?? https://t.co/kwuj1GNHf4

Yes, that’s quite the walkback. And the larger point here (which those who don’t work for the University of Texas can say without a walkback) is that the idea of a one-school linear network with only third-tier rights means a lot of the programming has to be that retrospective programming. But beyond the “History Channel” kerfuffle, though, the really notable part is Del Conte confirming the end of LHN and pointing to SECN as its replacement. Yes, that was the most likely outcome, but it wasn’t assured. And even this is coming from an AD’s response to a question, not a full statement; there are certainly still plenty of details to come on when LHN will end, how much of what was there will move to SECN’s linear and digital platforms, and if anything that was at LHN might wind up on other ESPN platforms like ESPN+, or if it will be all SECN/SECN+.

(There’s an important distinction between those services. ESPN+ is a standalone over-the-top service, while SECN+ requires cable/satellite/digital MVPD authentication of a bundle including SEC Network. So ESPN+ is easier to access for those without bundles, or those who have providers or packages without the linear SEC Network. But, unlike ESPN+, SECN+ comes with no extra fee for those who have SECN in their bundles. This is more confusing still with ESPN+, not SECN+, now carrying selected football and men’s basketball games under a 2020 ESPN/SEC deal. And just where Texas’ Tier 3 rights will land will matter: the live events LHN does currently have annually include two football games, 24 basketball games (10 men’s, 14 women’s), 60+ baseball and softball games, most home women’s soccer and volleyball matches, and coverage of other Texas sports. There’s wide interest in the football games for sure, and those interested in those other sports will definitely also be keeping an eye on where these rights go.)

There’s a wider discussion there, too, with Oklahoma recently putting its Tier 3 rights on ESPN+ (but possibly only until the SEC move), and with Disney seemingly moving towards an actual OTT offering for linear ESPN (though timelines and details there are still scant). This landscape is evolving quickly, and there’s a lot that could change by the point Texas does head to the SEC (and we still don’t know when that point will be). Maybe the Longhorns will wind up with some content on ESPN+ (and that could maybe even carry the LHN brand, similar to Oklahoma’s current branded section there), or maybe the SECN+ offerings become more specialized by school and the LHN brand lives on there, or maybe ESPN and its conference networks have more over-the-top offerings that include linear content at that point and this distinction becomes less important. There’s a lot that remains uncertain. But Del Conte’s comments here do seem to confirm that LHN as we know it will be ending with this SEC move, and that much of the live rights that lived at LHN will be heading to SECN and SECN+.